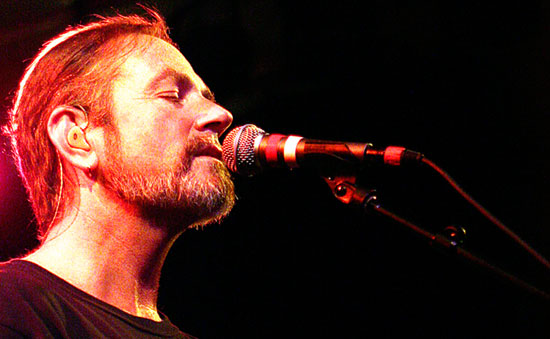 Many people, much to the band’s collective chagrin, think the Church came and went in 1988 with that year’s Starfish and its hit single, “Under The Milky Way.” While that slick, streamlined effort is fantastic, the melodic, poppier stuff that preceded it and the trippy psych rock that continues to follow are equally enthralling. The Aussie quartet—three original members (bassist/lyricist Steve Kilbey and guitarists Marty Willson-Piper and Peter Koppes) augmented by drummer Tim Powles—returns May 12 with Untitled #23 (Second Motion), by our count its 17th proper studio record. (During a conversation, Kilbey says the band has released more than that, but that number most likely includes compilations and other efforts; we didn’t want to argue, though.) The new LP is more of what we’ve come to expect from the Church: epic soundtracks to a film playing in Kilbey’s mind, featuring lyrics where you don’t know what he’s talking about—he dreams of a minotaur, for example, on “Sunken Sun“—but could give a damn thanks to the sprawling, atmospheric musical landscapes they accompany. In addition to Untitled #23, Kilbey and Willson-Piper have solo efforts out, Painkiller and Nightjar, respectively (both also on Second Motion). Below is our chat with Kilbey, who discusses competing with his bandmate and whether he accepts this writer’s critical mea culpa.

MAGNET: You seem like a very laid-back guy, but is there any type of competition between you and Marty about your solo records?
Kilbey: Only on a very superficial level, I guess. We both do such different things on our own. I don’t compete with anyone, really. My work speaks for itself. I’m plowing my own furrow, and no one else around these days is close.

You can tell us—yours is better, right?
Well, I prefer it, obviously, or I’d be doing his trip. But he could say the same thing. We’re not rivals. We’re two guys working on a project together, with different strengths and weaknesses. That’s the great thing about cooperation and specialization. I specialize in songwriting.

Even though I’ve enjoyed how you guys have evolved, I still go back to records like your 1981 debut, Of Skins And Heart. Songs like “The Unguarded Moment” and “Sisters” will always sound great to me. I’m wondering how you view your early stuff with the passage of time and in relation to how you guys sound now.
I think the early stuff contains the roots of where we are now. It stands up very well considering all the rotten records made back then. It’s not entirely embarrassing, but I don’t ever listen to it if I can help it.

The Church seems to get labeled as an “’80s band,” thanks to the success of “Under The Milky Way.” Considering you’ve gone on another 21 years since Starfish, is that something that bothers you at all?
Yeah, I get sick of being an ’80s band. The ’80s were anathema to us—we survived despite the ’80s, not because of them.

1990’s Gold Afternoon Fix and subsequent records seemed almost reactionary to Starfish—like, “OK, we had a hit, now here’s how we really want to sound.” Is that fair or merely poor speculation? 1992’s Priest = Aura, in particular, has moments that are pretty out there.
Gold Afternoon Fix was a useless mess. Priest = Aura was a masterpiece. We blew it with GAF—it was a frigging gaffe. Priest, yes, it was out there—out there in a beautiful, widescreen place. Oh, if only we’d followed Starfish with Priest. Too bad.

Those days of chart/popular success don’t seem like they’ll come around again, largely due in part to just how the record industry works these days. Do you find yourself dreaming of selling more records, or are you content merely to still be making them?
I dream of many things, but selling more records is not one of them.

You did those two Jack Frost records with the late Grant McLennan. The news of his death (in 2006) must’ve been a shock.
We had just gotten reconciled after a long period of no contact. What a shame. He was a diamond geezer.

In a review I did for 2002’s After Everything Now This, I used words like “pretentious” and “bloated,” even though I was very positive about the record overall. I got into a discussion with fans on the Church’s message board, and while I think they understood where I was coming from and that I’ve been a fan longer than many of them, I definitely felt like I unintentionally gave you guys an unnecessarily backhanded compliment. So my question then is: Do you forgive me?
No. “Pretentious” and “bloated” are not qualities one should attribute to my music. My music is soothing and subtle and sweetly sentimental. You remain unforgiven.

12 replies on “Q&A With The Church’s Steve Kilbey”

“I’m plowing my own furrow, and no one else around these days is close” Quotes like this one contribute to the perception by people that Kilbey is arrogant. While I don’t completely agree that “no one else is close”, I do think that Kilbey’s talents are pretty damn special and he deserves to toot his own horn. The shame is that he has to toot it himself and hasn’t been rightly recognized for the extraordinary musical talent that he has while so much crap out there is lauded. Frustrating.

I just rediscovered this band about 2 years ago at Christmas. I was shopping at Amazon for relatives and saw Forget Yourself advertised on a page. I clicked on it because I thought the Church had folded up in the 90’s. Long story short, I discovered their huge back catalog and was floored by the beauty and depth of their material. It is one of popular music’s biggest shames that they have been forgotten, for with the exposure that bands with a quarter of their talent have received, I’m convinced that the Church would be in the rock n’ roll pantheon. Nice to see a magazine that noticed them. Thanks

Thanks for the coverage of a great artist (songwriter, author, arranger, producer, painter) and a great band. For those that lost the band after Starfish there is much more great music to discover. There are more than 17 studio albums, off the top of my head
Of Skins And Hearts
The Blurred Crusade
Seance
Sing Songs/Remote Luxury/Persia (3 EP’s combined)
Heyday
Starfish
Gold Afternoon Fix
A Quick Smoke At Spots (B-sides, rarities)
Priest=Aura
Sometime Anywhere
Magician Among The Spirits
Hologram Of Baal
A Box Of Birds (covers album)
After Everything Now This
Parallel Universe
Forget Yourself
Beside Yourself
Uninvited Like The Clouds
Back With Two Beasts
El Momento Descuidado
El Momento Siguinte (this and previous are “unplugged” albums of classics)
Untitled #23

Short and sweet.
It is interesting to ponder what would have happened if Starfish had been followed up with P=A. “Here’s one straight from the factory” pretty much sums up GAF.
I know this is an SK interview, but I still think the presence of Tim Powles is a seriously underrated factor in the outstanding quality of their newer releases, evidenced by the fact that he’s on much of their solo efforts as well, playing and mixing.
And I will be very disappointed if “You Remain Unforgiven” is not the title of a song somewhere down the line, if not an ep or album.

The Church have never sounded better. Each new album has been steeped in their unique sound, and yet each one has thrown me for a loop and has never been what I expected. It’s no surprise that their intricately woven soundscapes and deeply poetic lyrics have been overlooked by the vapid mainstream. But that is probably the very thing that set them free. In today’s online world the possibilities have never been better for niche artists to uncompromisingly create the work they dream of, and get it to people who thrive on it.

In terms of solo work, Steve Kilbey is an artist at the peak of his powers. Painkiller is a sonic masterpiece. He’s also a highly regarded poet, painter, and blogger. Anyone who likes his lyrics should check out his Time Being blog http://www.stevekilbey.blogspot.com/

Here’s to another couple decades of The Church!

Untitled #23 is indeed the new and current album from The Church. I reckon it’s their best aside from “Back with two Beasts” since “Hologram Of Baal”.
This band mark 30 years next April. Even if you are not a fan of their music some respect must aforded for their longevitiy alone. However i should also point out that if you are not a fan, it’s your loss.
I’m still turning people onto this band’s uniqueness and magnificence.
Keeping the faith, spreading the world. Big Al, Sydney

steve kilbey is hands down the most talented songwriter today
and the church is the best band. they have created their own universe.

Thanks for hoisting the Church’s flag. For those who only know “Under the Milky Way”, there is SOOO much more to this band, so much material to explore, to my ears it’s not all great, but it is rewarding to sift through and find many many favorites. And you don’t have to spend a fortune to do it.

Under The Milky Way is only one of many great Church songs. And his solo stuff – the guy is a machine! Looking forward to this collaboration with members of another great Oz band All india radio: http://www.myspace.com/kilbeykennedy

The Church has been the most exemplary band in music since 1997-1998. They have released psychedelic and dreamy masterpieces including “Hologram of Baal”, “After Everything Now This”, “Forget Yourself”, “El Momento Siguente”, “Uninvited Like The Clouds” and “Untitled # 23”. Steve Kilbey is music’s most eclectic and dynamic frontman. He’s also a painter, an artist, a blogger, a Yogi, a vegan and an environmentalist.

This new album is a career high – and easily one of the finest of the year. I look forward to the review soon!