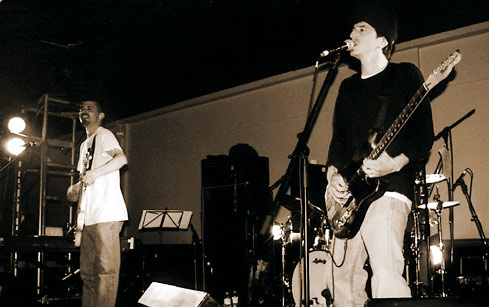 :: ARCWELDER Pull // Touch And Go, 1993
“Sing a little pop song/Then everybody loves you,” sang Arcwelder on “Remember To Forget,” one of the many instant classics on Pull. If only it were that easy. Coming out of Minneapolis’ fertile ’80s scene, Arcwelder seemed like the logical successor to hometown heroes Hüsker Dü. Like the Hüskers, Arcwelder was a punk-leaning, pop-loving power trio whose vocal duties were shared by its guitarist and drummer and whose bassist had a moustache. But Arcwelder never really rose above cult status despite releasing six albums of catchy, noisy rock ’n’ roll. Pull, the band’s third LP and Touch And Go debut, was the best of the bunch, a 45-minute masterpiece that still holds its own against almost anything from indie rock’s glory years. So what if Arcwelder never achieved commercial success? Like the band sang at the beginning of Pull, “When it’s all done/This is just a song.”

Catching Up: Though the trio rarely plays live and has no plans for another proper record (an Internet-only release has been discussed), Arcwelder still practices once a week.

Another perfect one from Touch & Go. Great album, though I think Entropy is their true masterpiece. Like Todd Trainer & Bob Weston said, they’re the only band to never have a bad song in their whole catalogue. That says it all right there.

Arcwelder is still a band after all these years. The lack of commercial success was never an issue for guys who were always seemed happy just playing to their friends and family. Bill Graber currently lives in Singapore with his family and has worked for the same Engineering company for the past 23 years. He is now in Marketing. Scott MacDonald (the amazing drummer who sings) is working in Minneapolis for Wells Fargo and Rob Graber is a programmer also in the Minneapolis metro. The band still plays once or twice per year. When they do, it’s a treat for anyone who can get there and believe me when I say, their aging fans have been known to hop planes to fly in for the occasion.