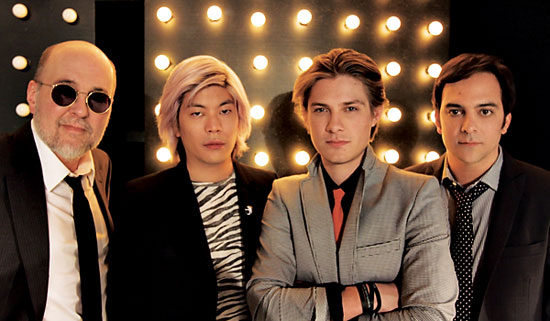 For power-pop junkies, Tinted Windows’ self-titled debut (on S-Curve) ought to feel like the smack addict’s equivalent to China white. Gleefully combustible, intellectually uncomplicated and catchier than anything from Disney’s adenoidal teen-pop brigade, its 37-minute insulin rush is perpetrated by a (sort of) supergroup whose multi-generational pedigree is less odd than it is oddly appealing. Tinted Windows’ initial inspiration came from Fountain Of Wayne’s Adam Schlesinger, who, since befriending middle Hanson brother Taylor a ways back, had always wondered how his pal’s malleable man-boy vocals would stand up to a withering wall of guitars. Smashing Pumpkins alum James Iha was happy to supply the latter, while Schlesinger strapped on the bass. They also managed to collar 57-year-old Cheap Trick drummer Bun E. Carlos, whose inspired time-keeping on Tinted Windows indicates he may just be savoring this ramped-up nostalgia trip more than anyone else. So, with a frontman as disarmingly swell as the 26-year-old Hanson and a set of songs as driving and cohesive as anything on Cheap Trick’s Heaven Tonight, are Tinted Windows in this for the long haul? MAGNET asks Iha, who grapples with this and other questions through the congested haze of a nasty head cold.

MAGNET: My daughter loves the album; she’s six years old. I love it, too, by the way.
James Iha: All right, so we’re done then. Great album. [Laughs]

When talking about Tinted Windows, you’ve cited punk influences like the Buzzcocks, and yet the album is pretty refined.
Initially, we were more on the punk side of power pop—not that I’d call this album punk. We wanted to do our own version of power pop—no keyboards, no three-part harmonies … We wanted it to be fun, but we definitely took the writing seriously.

Did you all pitch in on the writing?
Adam, Taylor and I wrote songs separately and brought them in. Adam and Taylor wrote one song together (“Take Me Back”). We had demos, and we bashed them out, with Taylor trying to find the right key. We all wanted to hear Taylor with the loud guitars while keeping everything pop. That served as kind of a template for what we wrote.

Well, the experiment worked. Taylor’s vocals sound great with the guitars.
Definitely. More than any of us, this is Taylor’s album.

Obviously, you had to scale back the more experimental side of your playing.
Yeah, with the Pumpkins and A Perfect Circle, I used a lot of effects for a hard-rock sound. But changing wasn’t that hard. It was like, “How do we respect the song?”

Bun E.’s drumming sounds revitalized on this album. How’s it been having him back there?
It’s an honor. He definitely has ideas about what he does and doesn’t like. We had him for two days; he just bashed through the whole record.

Were you surprised that he agreed to do it?
We talked about different drummers, and one of our reference points was always someone who played like Bun E. Carlos. After a while, we were like, “Let’s just call him.” His response was simple: “Send me the tape.” He heard it, and he was into it.

How difficult has it been to corral everyone for the upcoming tour dates?
It’s sort of like a four-headed hydra. Cheap Trick is opening up for Def Leppard on tour; Hanson is making a record; and Fountains is making a record and doing one-off shows—but it’s cool. As long as we can get Bun E. and Taylor in one place, it’s great. We had just two or three rehearsals for South By Southwest. It’s been a little fast and loose, but it’s been good so far.

Will there be a second Tinted Windows album?
We’re already talking about that. I don’t see why not.

As for this album, have you thought about targeting the teen market?
[Laughs] I’ll bring it up with the label, but I don’t think we’re going to threaten the Jonas Brothers.

One reply on “Q&A With Tinted Windows’ James Iha”