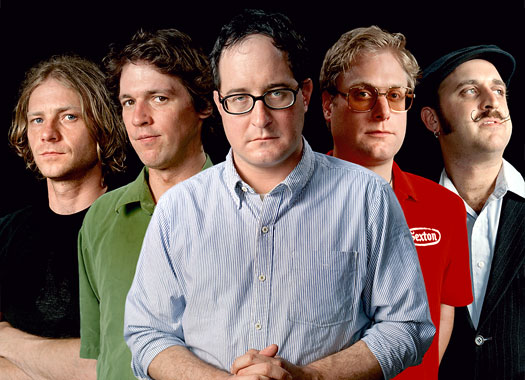 When the Hold Steady formed in 2003, part of its mission statement was to combat the scourge of plastic dance rock and ’80s revivalism happening in its adopted hometown of New York City. Can a lovable band of underdogs produce such a thing as an “overrated” song? Given the near-unanimous critical praise of the Hold Steady’s output (MAGNET named Boys And Girls In America 2006’s finest album; read our feature on the band from that same year), we’re obliged to explore the possibility.

:: The Five Most Overrated Hold Steady Songs
1. “Your Little Hoodrat Friend”
Taken in its entirety, 2005’s Separation Sunday is a near-unassailable album, an instant-classic treatise on adolescence, drugs, religion and punk-rock love. But when you take it apart song by song, certain puzzle pieces look jagged and weird. “Your Little Hoodrat Friend” is the obvious pull quote from the album’s narrative—easily identifiable chorus, repetition of the song title to the point of nausea—but it’s also the least interesting. The female backing vocals on the chorus are a little too high in the mix and sound overly brassy, though they’re tame in comparison to the aural carnage “Chillout Tent” later wrought.

2. “Chicago Seemed Tired Last Night”
I’m calling this one overrated because fans seem to be disproportionately drawn to it. Maybe they think the title is catchy or funny or they like Chicago or they don’t like Chicago or they’ve heard of a place called Chicago. In both Lifter Puller and the Hold Steady, Craig Finn has upheld a fine tradition of shouting out cities; he’s one of very few lyricists who could probably list a Rand McNally road atlas as an influence. Over a fairly rote, Thin Lizzy-ish guitar riff, this song just kind of stomps in place. Writer Nelson Algren (who lived in Chicago) and W.B. Yeats (who did not live in Chicago) are namedropped for reasons unapparent to me. A crucial lyric in the song seems to be, “They had cigarettes where there were supposed to be eyes,” like it’s a punch line or a profound observation. Have no idea what it means. Sounds like a description of a Jawa.

3. “Citrus”
Boys And Girls In America was a tipping point for the Hold Steady, the moment at which Finn and Koob (that’s guitarist Tad Kubler) realized they needed to start swinging for radio play and interstitials for TV sports programming. Not in a crass, commercial way; more in the way that thirtysomething dudes realize it’s time to give a fuck. Sometimes the gambit worked (“Chips Ahoy!” charges out of a car-stereo speaker like you wouldn’t believe), and sometimes you got the aforementioned “Chillout Tent” (a Grease-y “Summer Lovin’” duet) and acoustic alcohol ballad “Citrus.” It’s kind of like they were going for the Replacements’ “Here Comes A Regular” and wound up with Extreme’s “More Than Words” rearranged for frathouse consumption.

4. “Sequestered In Memphis”
2008’s Stay Positive is my least favorite Hold Steady album. It feels rushed and choppy, like the band just needed some new songs to tour behind. Which is not a sin; it’s just not great art. I never mind when the Hold Steady recycles itself (which mostly consists of Finn repeating lines used in previous songs; more on this later), but Stay Positive single “Sequestered In Memphis” finds the group, for the first time, recycling someone else. It’s like E Street Band Bingo: the piano line, the saxophone, the paraphrasing of the “Thunder Road” line “You ain’t a beauty, but hey, you’re all right” (which Finn already accomplished in detail with the previous album’s “Southtown Girls”). It’s all a bit too populist and far removed from the Minneapolis-punk silliness and goofy inside jokes that made Lifter Puller and early Hold Steady a cleverly constructed snowglobe of Finn’s real and imaginary life.

5. “One For The Cutters”
Again, this isn’t a wildly popular Hold Steady song, but someone—maybe someone in the band itself—rated it highly enough to be included on an album (Stay Positive) when, in fact, this song deserves no quarter, no sanctuary, no audience, no airplay. It’s a fucking harpsichord song. When I first heard it, I thought the Hold Steady was pulling a Spinal Tap “Stonehenge” joke. I pray to Odin that was the case.

:: The Five Most Underrated Hold Steady Songs
1. “Knuckles”
I didn’t overrate anything on 2003 debut Almost Killed Me because it would seem all wrong. The album is an opening statement that shouldn’t be missed by newer fans who dig the bar-band, beery middle-aged rock thing; it connects Finn’s past work in Lifter Puller to the Hold Steady and is Kubler’s coming-out party as a writer of ridiculously potent, big-balled riffs (see: “The Swish”). “Knuckles” isn’t quite as well-loved as “The Swish” or “Most People Are DJs,” and it’s got a funny synth squiggle indicative of a pre-Franz Nicolay era. Lyrically, it’s a pretty involved tale involving crystal-meth raids, Finn’s name-game motif (“I’ve been trying to get people to call me Johnny Rotten/But people keep calling me Freddy Fresh”) and a subplot about a spider tattoo that, upon the 35th listen, you realize it relates to a seemingly unconnected comment about citrus-flavored beverage Five Alive. (I know this makes no sense if you haven’t heard the song.) At the 46-second mark, the guitars come crashing in a half-measure too early, a trick that’s repeated on “Multitude Of Casualties” (a.k.a. the best Hold Steady song in the catalog).

2. “Stevie Nix”
“You came into the ER drinking gin from a jam jar!” is one of many great lines in this song, and Finn’s vocal intensity easily matches the brute force of the guitar riff. The last two records have found Finn using his voice in a more melodic way (I wouldn’t quite call it “singing”), and that sometimes makes him sound drowsy against Kubler’s guitar bluster; take a listen to “Stuck Between Stations” from Boys And Girls, for instance. “Stevie Nix” lives a complete life: It references T.Rex’s “Ride A White Swan,” nods to anarcho-punk zine Profane Existence, then recounts the once-popular rumor about Rod Stewart getting his stomach pumped after blowing all the guys in his band. That’s all there is to life, right? Those three things?

3. “Girls Like Status”
A perfectly good song left off the regular version of Boys And Girls; it appears as a bonus track on the iTunes edition. My best guess is that somebody didn’t like the harmonica or thought it was too similar in theme to “You Can Make Him Like You.” There’s a pretty sweet shout-out to the Mountain Goats’ John Darnielle, too: “It was song number three on John’s last CD/’Gonna make it through this year if it kills me.’”

4. “Killer Parties”
Next time you want to slow things down with the Hold Steady and get reflective, skip “Citrus” or “Certain Songs” and proceed directly to “Killer Parties.” It’s the proudly sober morning-after remembrance of all the used-up drugs and broken lamps and close calls and out-of-town brodowns while on tour. It’s bassist Galen Polivka’s finest moment, as Koob steps aside and lets him carry the melody. If you mention a song’s bass line, that automatically means it’s underrated.

5. “Stay Positive”
The rating index on this one depends on your perspective, but even if you felt let down by Stay Positive, you have to appreciate the album’s title track, a grand summation and snapshot of the band’s achievements thus far. Finn picks his own pocket multiple times, referencing previous Hold Steady songs and getting sentimental about his own adolescence (“Youth Of Today and early Seven Seconds taught me some of life’s most valuable lessons”) and someone else’s (“The kids at the shows/Will have kids of their own”). It’s mawkish, overly sentimental and totally inspiring with a stellar “whoa-ho-ho” chorus that could go on forever in hot-dog heaven. It’s also an oddly final statement, like a hall-of-fame ballplayer thanking the fans for their support over the years. That’s not a midseason kind of thing to do; here’s hoping the Hold Steady plays on.

17 replies on “The Over/Under: The Hold Steady”

Hey I agree with one for once! Thanks for not giving this one to duBrowa!

All of The Hold Steady’s songs are overrated.

I love that Stay Postive is on here, but my favorite song, which I have never seen them play and I feel is totally underrated is “The Cattle and the Creeping Things”

I am a hugh fan so I am trying to go over the overrate list more so then the underrated list. It’s hard to be critical of a band that I really like .I have to say that I liked Stay Positive. I enjoyed a lot of it. I do agree that it is not their best CD but I think I enjoyed it way more then (Matthew Fritch) Slapped Actress is a great song I also like Magizines

one for the cutter is not just the worst hold steady song, but one of the worst songs i’ve heard in a while.

stevie nix is a badass song, however

Totally agree with “One for the cutters”-

I’ve always said they should rename that “Time to hit the bar for another beer” when they play it live.

Nix “Stap Positive” for “Slapped Actress,” and “Girls Like Status” for “Banging Camp” and you got a great list here. “Banging Camp” is the best Hold Steady song!!!!

I don’t understand. Radiohead, the kinks, and … hold steady? They are a shitty & ridiculous band. Those lyrics are not at all clever. They’re boring. and ordinary. Shame on you!

Hear hear on “Slapped Actress.” Is “Cattle” underrated? NPR did that whole dissection job on it a ways back–a move which seems to point to some degree of regard. But is that giving NPR too much credit?

Anyone for “Positive Jam?”

I nominate “First Night” as an underrated song.

can’t agree on Cirtus… I’ve had kisses that make Judas seem sincere is a great line.

Totally agree on One For The Cutters, Hoodrat Friend (although its a good song). Sequestered in Memphis isn’t one of their best, but I find it to be a good intro song for classic rock fans getting into the band at first.

The underrated songs are spot on. THERES WARS GOING DOWN IN THE MIDDLE WEST!! Killer Parties is one of their best songs…..

I usually don’t take the bait but to trash “One for the Cutters” is just unacceptable. The song should resonate with anyone who has ever partied in the woods under the stars, has familiy and friends who will never leave their howntowns, and highlights how we’re all in trouble (we’re just too dumb to know it yet). Brilliant.

So this is how a comments section really feels… Sen. Tankerbell, “Banging Camp” is definitely a great song; You could easily swap that out for “Stevie Nix” to represent Separation Sunday. Not changing my mind about “One For The Cutters,” however.

i have to vehemently disagree with chicago, though. that song is the truth.

and the last line is a reference to a dylan lyric

“An’ he just smoked my eyelids
An’ punched my cigarette.”

The 2 guys above pushing for “Banging Camp” are right–it might be their best song. It’s certainly one of the tightest and it contains my favorite HS lyric (“I grew up in denial and went to school in Massachusetts”).

Seconds on Slapped Actress–Finn’s finest moment as a lyricist. That song is wrapped around itself so tightly, and it’s one of Koob’s best riffs, IMHO.

Also–The Hold Steady are a band that loves their fans; that does everything they can to fight cynicism, exclusion, and elitism at their shows; and has no problem with letting anyone into the party. In the world of indie rock, that makes them far from boring and very, very far from ordinary.