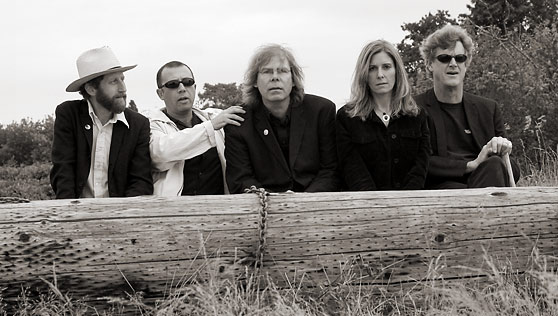 I’ve known Jeff Kelly (the creative dynamo who’s stoked the fires of the Green Pajamas for the past quarter-century), his vivacious wife Susanne and their daughters Jane and Tess for about 12 years now. It was one of those relationships that just instantly clicked the first time Kelly and I spoke on the phone, then finally met in person at the Terrastock II festival in San Francisco in 1998. We got on so well, I flew with the Green Pajamas (whose new album, Poison In The Russian Room, has just been released by Hidden Agenda) from their Seattle home to London for the third Terrastock in 1999. I have two favorite Jeff Kelly moments, both from that voyage to England. The first was our side-trip to north London’s Highgate Cemetery to visit the grave of Elizabeth Siddal, a pre-Raphaelite heroine of Kelly’s. The second occurred at Victoria Station soon after our arrival. As I hurried off to buy a two-week voucher for the London Underground, I waved at Jeff across the mezzanine to come on down and buy a tube pass. As Susanne industriously fed pound coins into a ticket machine for the train stop nearest our hotel, Jeff looked at me benignly, his arms extended with palms turned upward, and shrugged his shoulders in Homeric resignation.

When MAGNET phoned Kelly at his U-district Seattle home in the early afternoon, he had just returned from a staff meeting at the group health office where he’s employed part-time.

MAGNET: So, what happens at a staff meeting?
Kelly: Not much. The bosses looked at everyone, wanting somebody to talk, but nobody would. So I actually did put in a comment, kind of a negative one. In group health, the hierarchy makes all the decisions and changes what happens on the front lines, and it never works. Then a year and a half later, they go back to how it was.

It was the same thing when I served 25-to-life at the post office. Some idiot in a little room gets a bright idea and changes everything, always for the worse, because he’s never done the job.
It was snowing Sunday morning up here, big fairy-tale snowflakes, really beautiful. When I was a kid, you got out of school in June, the sun came out and it was summer. Then it started raining around September and it was fall. Now we might have a whole spring where it’s cold and rainy or a summer where it rains all the time, and it’ll be warm in September.

There have been a few changes in the band since we did that first interview for MAGNET back in the ’90s.
We’ve added singer/guitarist Laura Weller and her husband, Scott Vanderpool, on drums since then. Scott’s also a college DJ, always loved rock ‘n’ roll. He’s a really good drummer and really enthusiastic. We don’t play out nearly enough for both him and for Laura. We play maybe five shows a year.

I like the sequencing on the new record. That’s one of those unexplainable knacks that’s more important to an album’s sound than you might think.
(Pajamas co-founder) Joe (Ross) and I have often argued, even gotten mad, over where songs should go, what should start an album and what shouldn’t.

When you and Joe disagree, do you always win, or do you let him have his way sometimes?
No, I let him have his way sometimes. [Laughs] And you can quote me on that. Sometimes I’ll get a CD by somebody, I’ll hear the first few songs, then I’ll go do something. When I put it on random mode, I’ll hear stuff at the end of the record I’ve never heard before that I really like. Sequencing on this is a little different. It has a side one and a side two. Side one is a collection of independent songs, but on side two, the songs all go together and tell sort of a vague story. Originally it was titled In Search Of The Illusive Fairy Queen And Some Pleasure Unknown. It’s about trying to attain the unattainable, in this case the fairy queen, something you can’t have: the woman who’s never been touched. In the end, she slips away and he never gets to know her secrets. It’s inspired by your greatest fantasy in life. I made it even more magical with my daughter Jane singing backward.

She sings forward, then you reversed the tape? I’ve heard of people singing backward, phonetically, then they reverse the tape and it sounds like you’re from another planet.
[Laughs] I did that once. We recorded a little phrase, ran it backward, then I learned to sing it backward, then sang it that way forward again, so it would sound like gibberish. It was a happy accident.

That makes me dizzy.
Side two of the new album is real stripped-down, just piano, bass and drums. Not, as Joe would say, in my thickly over-produced style.

I’m listening to “Who’s That Calling” right now from side two. It’s excellent interview background music. It sounds like one of my favorite soundtrack guys, Angelo Badalamenti, who did the music for most of David Lynch’s best pictures, with that creepy, minor-key, lounge-jazz tenor sax.
Oh, yeah. That’s Craig Flory playing sax. I like to use a little bit of the creepy element. I just saw that Swedish movie Let The Right One In. Did you see that? I’m obsessed with it at the moment. It’s all so beautiful and weird. It’s not a typical vampire movie. Takes place in the snow, all very melancholy and dark. It’s a coming-of-age film. They looked for those kids to play the leads for a year. Neither of them had ever acted before.

Have you seen Wendy And Lucy with Michelle Williams? She doesn’t say much, but you identify with her plight immediately. For some reason, she reminded me of you, maybe the vulnerability. You’ve told me often that you have an addictive personality. You smoke and drink and have tried many times to quit both.
It’s kind of like side two of the new album: that obsession thing. That fairy queen bit is all about obsession. I never thought really about it entering the music, but I think it certainly does. I obsess with things like the (1928 silent) movie Pandora’s Box, and I wrote the song “Any Way The Wind Blows” about Lulu (the film’s star Louise Brooks). I’d read a lot about that film, then I saw how modern it was, even though it was made in the silent era. I watched that movie three times, it was so wild and weird. I didn’t realize there was so much sex and drugs going on back then. I was captivated. I just started reading Samuel Taylor Coleridge’s “The Rime Of The Ancient Mariner.” All I could think was I wish I’d known about this when I did (1999’s) Seven Fathoms Down And Falling. It has all that ghostly, under-the-water imagery. My daughter Tess brought home a copy.

What else are you obsessed about?
Well, that song “Cristina” is about Cristina Hoyos in this flamenco movie Blood Wedding by Carlos Saura, and it was just so moving; it was all I could think about for months. For better, for worse, I think you see it in people who are more artistic than the normal ones who run the world.

Earlier this year, you played me the song “Tell Me It’s Not Too Late,” and you said Susanne felt it wasn’t as strong as some of the others, and what did it mean? That struck me as odd. Does a song have to mean anything? Can’t it just be a song?
She has insight into the songs that are more personal to me as opposed to the ones I make up out of thin air. But that’s fine. You write all kinds of stuff. I couldn’t get that hook out of my head. That song went on a collection, instead, called Hidden Minutes, on vinyl only from Camera Obscura in Australia, with a great Susanne painting on the front. It’s more like a collection of singles.

Any surprises coming in the near future?
I’ve already got most of the next album done. It’s all songs influenced by country ‘n’ western music. It’s going to be called Green Pajama Country. We’re going to put it out on Joe’s label. I grew up with country music because my dad liked it. I grew up watching Hee Haw, so Buck Owens is a favorite. And I played in a country band with Joe for a while, and we did a lot of songs by Hank Williams. Young Country? I like that stuff about as much as a toothache. If they want to play rock ‘n’ roll, they should be in a rock band and take off their hats. I used to play five-string bluegrass banjo—but not like Earl Scruggs—with my dad. We liked playing that hillbilly music. He loved that old country music, and that would always be on the radio in the car in the ’60s, so I’d hear that alongside songs by the Beatles and the Rolling Stones. That’s what influences this record, along with the more modern sound of George Jones. Joe sings on this record, too, on this old one I wrote called “I Just Wish That She’d Love Me.” It goes from the old-time ballads to these darker, hillbilly Appalachian things. As I’ve grown older, I realize the things I used to criticize, why did I waste my time on that? You get a little more wise. The French pop stuff I listen to, you might not be able to stand it. But I like it. It makes me happy. There’s a ton of these women singers that no one over here knows. I keep discovering them. Zazie is great. I’ve always loved Jane Birken and Charlotte Gainsbourg. I like bubblegum records by Ali Zee, who does total throwaway pop. As a kid, I loved Claudine Longet in the ’60s. There’s this woman named Stephanie LaPointe from Quebec with an album of melancholy, whispery, autumnal stuff that would make you throw away your Claudine Longet records. This is the real thing. It’s so beautiful. The other morning I had that record on as the big snowflakes fell, and my daughter Jane was looking out the window at the snow with the cat on her lap, listening to this perfect snowy soundtrack music. It was a very nice moment.