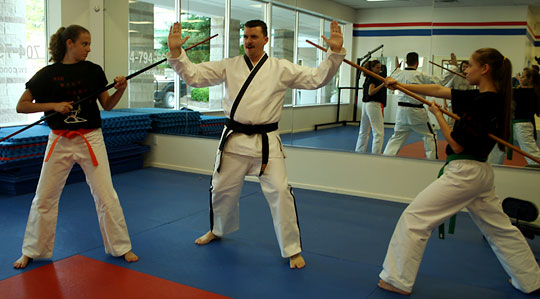 Lowery: I revisited 2006 cult film The Foot Fist Way after the seeing Danny McBride in HBO’s Eastbound & Down. If you have not seen The Foot Fist Way or Eastbound & Down, you need to put them on your list. But this is not about Danny McBride; this is about his co-star Ben Best. In the film, Best plays a washed-up b-movie action star named Chuck “The Truck” Wallace. But he also contributes heavily to the soundtrack with his band Pyramid. (Shouldn’t that name have already been taken?) I don’t know what Pyramid normally sounds like, but it’s clear that on this soundtrack they are going for a sort of ’80s Karate Kid synth-driven, almost-hair-metal type of rock. Clearly they are having fun with it and have tongue firmly planted in cheek. The trouble? At times, it works far better than anticipated. “Put To The Test” is just a sketch of a song. Anthemic, ascending Satriani-like guitar line. Check. Vaguely heroic, obstacle-overcoming stanza. Check. ’80s bouncing bass and synth beat. Check. But I like this song better than anything from that era. Maybe all those songs should have been thrown together so haphazardly. Also on the soundtrack: “Dog Wild Heaven.” I don’t know what this song means, and considering “dog wild heaven” is pretty much the extent of the words, I doubt the authors have any idea, either. Still, it’s one of the best less-than-two-minutes songs ever.