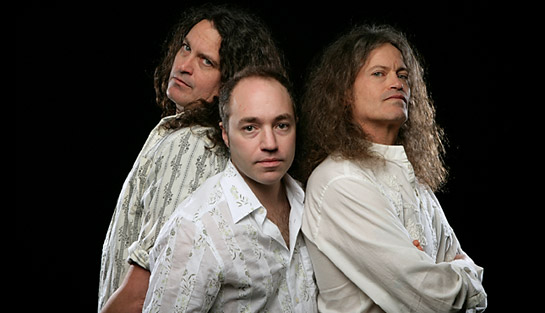 To have Cris Kirkwood back as the bassist of the Meat Puppets is nothing short of a miracle. The countrified rock band he founded with his brother Curt (guitar and vocals) and drummer Derrick Bostrom in 1980 broke up in 1996 due to Cris’ addiction to heroin and crack cocaine. In the ensuing years, Cris’ life spiraled far out of his control as he lost his wife to a drug overdose and spent 18 months in prison for attacking a post-office security guard. Now, almost four years clean and sober, Cris is gearing up to hit the road in support of the band’s 12th studio album, Sewn Together. Before he does, Cris will spend this week guest editing magnetmagazine.com. Read our 2007 career overview of the Meat Puppets.

MAGNET: Are you excited to have a new record coming out?
Cris Kirkwood: As excited as a horrible, horrible person is capable of getting. This one is definitely cool considering that Curt and I haven’t worked together in a long time and I haven’t done anything musically for a long time. And I was itching to get back to it. I’ve moved so far away from my troubles, if you will, that to make a record that’s how it used to be—you know, you write a batch of songs and go in and see what we can do with them. These songs are great, the kind that exude some fucking strange shit.

Curt ended up writing all the songs for this album, but did you work on these with him or was it all up to him to come up with new material?
This was all Curt. Curt’s one of those guys who’s always been a catalyst. I mean, none of this would have happened without Curt. He’s been the artistic engine that has allowed us to have a new fucking release. I’m a noodler. Curt’s a really focused guy who sets out to write something and fucking winds up with something specific. I’ll just sit there and play guitar for hours. I’ve always been, like, “Fuck, I’m glad Curt became a songwriter.” The dude is that good. It’s nothing like those days of putting notes in a hat and pulling them out and, boom, you have a punk song. He’s a sick fucking artist. The stuff that he does is just incredible.

Have you been writing any new songs for the Meat Puppets?
No. I’m just now really being able to process all the shit that I’ve managed to go through. I mean, shit got fucking out of hand. And for a long time, I wasn’t able to play music because I hurt myself emotionally by my bad behavior and my wife’s bad behavior. To address something as light as music … Music’s been a light thing to me, like dancing on your own grave. And suddenly, fuck, I’m halfway in my own grave and I don’t really feel like dancing. But to get to the point of actually playing and to feel like I’m growing again as an artist … it’s really interesting. Like a rebirth. It’s really testament to the strength of the human spirit. But I haven’t quite been able to get back to that point. I’m starting to feel it.

Was it hard to be away from music and to see your brother continue on without you?
No, that wasn’t hard considering I had fucked everything up for all of us. I really wanted Curt to do well. I mean, he’s my brother. But as far as that time being hard, it was fucking unbearable. That’s the bottom line in all of it. It was my fault and it was a wretched thing to do to myself: a gross, awful thing to do to yourself. Obviously it is who I am, but man … be careful what you do.

What do you think is the biggest thing you took away from that dark time in your life?
A lot of it speaks to the name of the band in the first place. You have some say in what you are and you don’t. Some of it is just a circumstantial, nature-and-nurture kind of thing. But if there’s one thing I take away from it is: yuck. If that’s how you want to live your life, have at it. But I’m very glad not to be there anymore. I really fucking can’t stress enough how lucky I am to have managed to pull out of it. And to have my brother want to play some more. It’s a Ringo song. You have to pay your dues if you wanna play the blues. I really didn’t want to sing the blues, though.

Is it strange not to be playing with (drummer) Derrick (Bostrom, who left the group in 1995)?
It’s definitely different. I miss Derrick. He was one far-out cat. One of the fucking farthest-out guys there was. Meat Puppets wouldn’t have happened without us running into Derrick. But it got to a point where he didn’t want to do it anymore. I think he was kind of glad that I fucked up. It gave him an out. We haven’t talked to him in ages. We got in touch with him when we started [the band] back up to see if he was interested in playing, but he turned us down.

You’ve been playing music for at least 30 years now. What do you think is the biggest lesson you’ve learned from all your experiences?
Don’t become a musician. At all costs. Stay in school. [Laughs] I don’t know. It’s a fucking trip. We just did what we did and the years chipped away at themselves. It’s really similar now to the way it always was. I started playing after I saw Deliverance. I went out and got a banjo and just practiced and played with it. And then one day, the notes just started to roll, bluegrass style. And I just sparked suddenly. I realized that someone invented this thing and there are certain tones that make up a vocabulary. And then it combined with the talking-drum element from the African world. It turned me on to the human content and the workings of the brain, of having an interest in making sounds like this. It made me want to push into those little crannies of my brain. Use all those metal and electric and wooden things that allow me to find myself and hurt myself and give it all up and go with it … Fuck, I don’t know. [Laughs]

6 replies on “Q&A With The Meat Puppets’ Cris Kirkwood”

What is Cris’ job as guest editor? Does it me we can send him suggetions for articles and reviews, or is it just an honorary title?

Editor Cris (he makes us call him that) is picking a number of the things we are covering this week. I don’t think he’s taking suggestions.

14 “Fuck”‘s in this interview. Drugs must have fucked him up.

I’m so glad he’s back!! Sewn Together is one of the best meat puppets albums!!! They’re so talented in what they do.

Hey Cris, I grew up in Omaha and there was always that “Meat Puppets” thing running through our little punk rock scene in the really early 80’s.
You will never know how much your music meant to us and still does to us dorks in Omaha. I Ilived in Tempe, on Wilson during that 80’s Sun Club, Long Wongs . I saw you guys at Hayden Square,
Egads, it was the best show ever.! I I know live in Chandler w/ my husband and 8 yr. old son (his middle name is Christian, a shout out to u). I now listen to Tom Jones, Neil Diamond ,Husker Du and anything SST . Hope you are doing well because you deserve a great life. Lori

I remember playing guitars and singing with Cris in the halls of the prison in Black Canyon. He taught me how to play “Ramblin Fever” haha. Cris, I hope your doing well and keep up the good work.