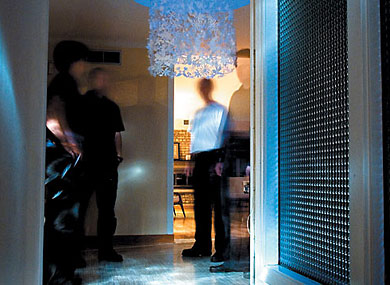 Bottomless Pit shouldn’t even exist, but when a bizarre and tragic event took the life of Michael Dahlquist, drummer for the group Silkworm, in 2005, that treasure of a band appropriately folded and the remaining members (Andy Cohen and Tim Midgett) soon found their way back to the music in the form of Bottomless Pit. The band is looser and rangier and more serious-sounding, and you can hear the heartbreak and bewilderment and simple missing-you feelings in so much of Bottomless Pit’s mature, downcast guitar rock. (In case you don’t know the story: Dahlquist was killed on his lunch break along with two friends when a suicidal woman intentionally crashed her car into theirs, which was stopped at a traffic light. She lived and is now in jail.)

The Chicago-based Bottomless Pit has toured sparingly since forming about three years ago. A warm spring night in Pittsburgh found the band near the end of a few-days tour around the Midwest. The 31st Street Pub has a heavy-metal, biker-bar feel. There’s a display case of fake skulls and other freaky bones, and part of the ceiling is decorated in autographed symbols from drum kits. The Iron City beer is cheap. The place is rock ‘n’ roll. Opening, as usual when Bottomless Pit stops in Pittsburgh, was Karl Hendricks, a ‘burgh staple whose namesake Trio/Rock Band has been around for ages. It’s now a more back-burner concern for Hendricks, and he still puts out records but rarely plays live. You wouldn’t know it, though, as the three-piece didn’t exhibit any rust. Hendricks’ formidable guitar skills kept the set interesting despite the loud, murky sound and drowned-out vocals.

Expanded from Silkworm’s spare trio formation (Midgett has jumped from the bass to join Cohen on guitar, and the band is rounded out by Brian Orchard on bass and Chris Manfrin behind the drums), Bottomless Pit has a more layered and textured post-punk sound that delves into expansive classic-rock noodling and math-rock arrangements.The classic-rock leanings were most evident on the handful of new songs that opened the band’s set. Serious and stoic, Cohen and Midgett aren’t hell-raisers onstage. They executed their songs in a precise, thoughtful way, with the rhythm section so subtly holding down the back end that you sometimes forgot they were there. After the batch of promising new songs, the band played selections from its two records to date, 2007’s Hammer Of The Gods and 2008’s Congress EP, starting with the catchy “Dogtag,” which features a trademark driving chorus from Cohen. As with the Hendricks set, the sound at the club wasn’t as crisp as it could’ve been. Cohen has a great, flat Midwestern baritone that was lost in the mix. Despite that, it was a compelling, albeit brief show. There were a number of enthusiastic fans jumping around up front, but most people stood quietly listening, maybe seeing Bottomless Pit for the first time and not knowing the back story or maybe thinking about Silkworm and feeling that collective loss.

Bottomless Pit doesn’t play Silkworm songs. No one at any of the band’s shows I’ve seen has ever yelled for a Silkworm song. I think everyone just understands. They know you shouldn’t look back. While Midgett and Cohen have always appeared quite serious when playing, Dahlquist was the ham of Silkworm, almost always performing shirtless, talking to the crowd from behind the kit he played so thunderously, drenched in sweat and glee. That’s missing now. And that’s the heaviness and seriousness you feel at Bottomless Pit shows and on the band’s records. It’s an unsecret loss. When Midgett sang, “Silver moon/Hanging up in the sky/The same moon that you see/From the other side,” on the elegiac, set-closing “Red Pen,” you could feel a tangible weight because you knew exactly what he was talking about.

That was it. A few words of thanks. No encore. No frills. On the way out, I thanked Midgett for playing. While many of us wish Bottomless Pit didn’t ever form, we’re still very glad the band did.