“We’re going to party like it’s 1699,” sings Nina Persson on Colonia, the second album the Cardigans frontwoman has released under the A Camp name with husband Nathan Larson (Shudder To Think) and Niclas Frisk. As the lyric and album title imply, the ornate Colonia is loosely based on the theme of love in the time of colonialism and is inspired by cabaret and musicals from the ’40s. Larson and Persson—king and queen of Colonia—are guest editing magnetmagazine.com all this week. Read our Q&A with them. 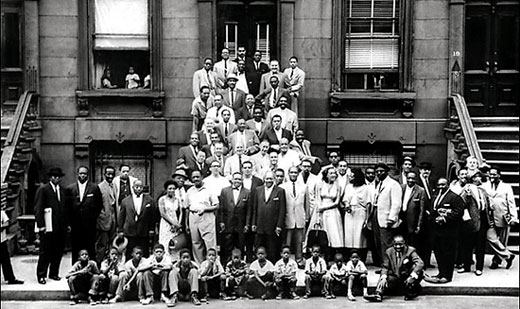 Nathan And Nina: We would describe ourselves as white people. In fact, we would describe ourselves (at least in Nina’s case) as almost translucently pale, whiter than white. Nathan has a darker sort of Slavic thing going on, but still: white people. This puts us in the minority, racially speaking, here in our neighborhood of Harlem. Let us tell you about our area a little: Just around the corner lived Langston Hughes, a brilliant poet of the Harlem Renaissance. Roberta Flack has a house just nearby. James Baldwin was a couple streets over. Down the road, you have such landmarks as the Lenox Lounge, which saw performances by such mythical figures as Billie Holliday, Louis Armstrong, Ella Fitzgerald, Miles Davis, and where a young Malcolm X hustled it. The list of legendary names is endless; American art and music was transformed and overhauled profoundly right here on these few blocks, impacting and, in no small part, defining everything we now understand as popular music. Beyond the Lenox a block is the Apollo Theater, perhaps the most famous Harlem landmark, which needs no description. Our immediate area is lovely, beautiful brownstones, families, good people. Perhaps the first neighborhood we’ve ever lived in NYC where folks actually greet you on the street. A veritable Sesame Street vibe is in effect; as we look out the window right at this moment, we see a group of girls sitting on the stoop across from our house, laughing and talking and doing each other’s hair. A group of four old timers have taken out lawn chairs and a grill and are BBQing some corn and chicken right there on the street. It’s lovely.

Of course, we’re interlopers here. Part of the movement, ever creeping outward, forcing the price of real estate up and up until the locals can’t afford their own neighborhood anymore. They call it gentrification, and it’s an ugly word for an ugly reality. But what to do? Because we do have genuine love for this neighborhood. For our neighbors. For our house. For the history here. And never, ever, have we felt that our skin color has generated anything in the way of negative attention. Harlem has its preservationists, which is fantastic and is as it should be in any neighborhood, especially one so historically rich. And like any other area where one racial group predominates, fear and extreme reaction can kick in as alien-looking faces start popping up. Some of this fear and anger comes spilling out on to the street, as people feel the need to give voice to this anger and fear.

As it gets warmer, last year and years before, guys come out and soapbox on 125th Street. Generally it’s a lot of standard “Jesus loves you” stuff, but there’s a pretty wide spectrum. When the issue is race, some pretty heavy stuff starts to come out, as would be expected. On the extreme end is a group whose message is a basic racial separatism: Jesus was black (probably true, of course, if there was a Jesus and if you loosely define any people of color as black) and the white man is the devil (not totally untrue, but we’d extend that to say all men and women are both devil and angel), etc. They give special focus to the ever-increasing number of mixed-race couples making their way down the street, as there’s a special corner of hell reserved for young lovers of this type. The speakers sweat, they strain. Their seriousness to this issue is never in question. Some of the guys are super charismatic and funny, with real star quality. Some harbor hip-hop ambitions and let loose freestyle routines on racial geopolitics. Some are geeky, they stumble over their words and refer to notes with shaky hands. Don’t see a lot of women. Where are the women in all of this? Who knows?

So much energy is expended. These folks mean what they say and sometimes say it eloquently. Our presence in the neighborhood is an affront to them, a slap in the face. Sure, we get it. If only it were all that simple, if all the white folks fucked off back to the West Village or hopped a boat back to Europe or whatever the proposed solution might be. Or maybe we could split the continent down the center. I’m sure many (misdirected) minds have dwelt on this and have far more elegant solutions. But no matter how you slice it, you get the feeling that nothing can stop the monster iceberg making it’s glacial path uptown, bearing Starbucks, Best Buy, American Apparel and Body Shop franchises. This is the monolith that will eventually homogenize neighborhoods like Harlem, will once and for all rob them of character. This is a local issue and a worldwide conundrum. Perhaps our energies could be better spent focused on pushing back against this trend, rather than hating on our neighbors. But hey, what do we know? We just reckon we’re lucky enough to have found a nice place to live, a great place for our kids to grow up and a lovely patch of earth to grow old on. Isn’t that what everybody’s looking for? Langston Hughes’ “Dinner Guest: Me” after the jump.

“Dinner Guest: Me”
I know I am
The Negro Problem
Being wined and dined,
Answering the usual questions
That come to white mind
Which seeks demurely
To Probe in polite way
The why and wherewithal
Of darkness U.S.A.–
Wondering how things got this way
In current democratic night,
Murmuring gently
Over fraises du bois,
“I’m so ashamed of being white.”

The lobster is delicious,
The wine divine,
And center of attention
At the damask table, mine.
To be a Problem on
Park Avenue at eight
Is not so bad.
Solutions to the Problem,
Of course, wait.