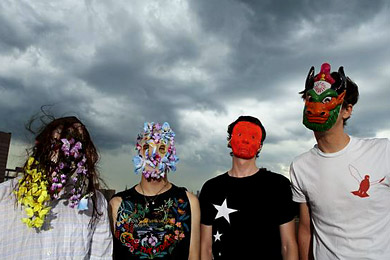 People have been trying to do space rock ever since British producer Joe Meek topped the U.K. and U.S. charts in 1962 with “Telstar” by the Tornadoes, soon after the launch of the first Telstar communications satellite. Pink Floyd, Hawkwind, Devo, Man…Or Astroman?, Mercury Rev, Spiritualized and even David Bowie have taken a crack at giving you the “deep space” experience. With Animal Collective, however, the point of view shifts dramatically. These sounds are meant to be created by extra-terrestrial creatures, presumably for their own enjoyment, if such a concept even exists in far-flung galaxies.

About 20 minutes before the show began, a roadie rolled a 12-foot white-rubber sphere into place, framed at the back of the stage by a large piece of glass that resembled the windshield of the Starship Enterprise. The giant globe would serve as both the planet of destination for the evening and as a screen to reflect a hyperactive lightshow that bounced off the web of giant concrete snowflakes on the ceiling of the Fox Theater. Four objects resembling either guitar amps on steroids or oversized church pulpits from The Cabinet Of Dr. Caligari began to glow ominously in the foreground. Illuminated by Dayglo light bursts and flickering strobes, these would be the audience’s focal points for the rest of the evening. Note to self: Bring sunglasses next time.

Every once in a while, you got a glimpse of what looked like an earthling wandering about on the shadowy stage, but whether human beings actually did any playing or singing was impossible to tell from the balcony. As the music ebbed and flowed, the sold-out crowd had to fit applause in whenever it could. It felt a little awkward clapping for inanimate objects, anyway. Avant-garde acts like the Residents had people up there to look at, even if they were topped by giant eyeballs. At the 50-minute mark, someone stepped forward and said something that might have been, “Thank you.” Or maybe not. The 80-minute set may have consisted of numbers from the new Animal Collective album, Merriweather Post Pavilion, but the live sound was much larger in scope, as though inflated by a giant bicycle pump to the point of bursting. Lyrics, much like those of ethereal Icelandic combo Sigur Rós, were indecipherable, as you would expect from visitors to this tiny blue planet.

Oddly enough, sprinkled in among the space opera were snatches of pounding tribal exotica that would have seemed right at home among the headhunters of Borneo. Or in a Calvin And Hobbes cartoon with Spaceman Spiff battling giant Jurassic reptiles. But the main thrust was interplanetary in nature. Some tunes successfully captured the hyper-drive blast of interstellar travel, while others sounded like you were stuck in a smelly Greyhound bus depot late at night in what passes for Tijuana on Rigel VII.

As I decompressed while removing hard hat, safety glasses and earplugs on the short walk to the Oakland rapid-transit station, I could have sworn I heard the comforting voice of HAL 9000, the super computer from 2001: A Space Odyssey: “So, what did you think of Animal Collective?” “I don’t know, Hal,” I said. “I kind of liked them.” A girl walking by gave me a funny look.

you clearly don’t know anything about this band do you….

This was a ground breaking performance that tocuhed every page of AC’s diverse catalogue. The crowd was amazingly energetic and engaged in the show. Hey Jud, that wind you felt on your brow was the whole concpet of this band (their music, the performance and the culture of this event) flying over your head!!!!!!!!!

wow, the lack of mention of actual music content of the show is impressive…

I just realized that the one song sample you have is some weird, off rhythm remix that was probably the first thing you found on youtube….
This very well could be the worst concert review ever