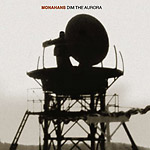 “It’s Enough To Leave You” is the opening track on Dim The Aurora, and it packs about a quarter-century of alt-rock reference points into its four-minute running time. From the awkwardly soaring chorus and the chunky, quirky, handclaps-and-piano rhythm line to the dynamic buildup that goes nowhere but is expansive and elegant getting there, “It’s Enough To Leave You” manages to subtly point fingers at everyone from Michael Stipe to Spoon to the Hold Steady, all while managing to sound quite unique. To these ears, however, Austin’s Monahans evoke nothing as much as the rambling sonic winsomeness of their Lone Star neighbor Will Johnson, although the 11 tracks on Dim The Aurora are decidedly more put-together and structurally sound than anything Johnson has ever done. Monahans graft singer/songwriter-type warbling and classic-rock guitar figures onto messy and gratifying beds of sound that incorporate regular instrumentation in highly irregular ways. There’s a definite sense that the sprawling guitars on cuts like “I Run To You” and the catchy, melancholy title track want to stretch out even further and that the buzz and howl of the three instrumental songs are a clarion signal as to the group’s real intent. In the same way that Johnson makes deceptively dense music that only seems simple and straightforward, Monahans have made an album that’s richly rooted in American rock traditionalism but also lurching noisily forward into something far more intriguing. [Misra]

One reply on “Record Review: Monahans “Dim The Aurora””