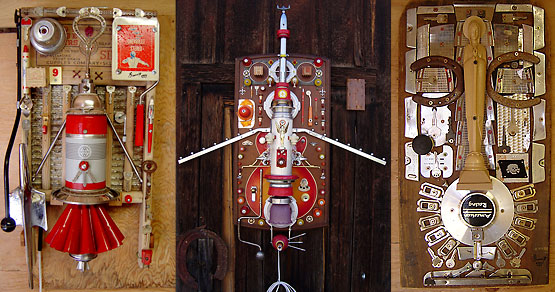 Peter: I was saddened to realize that the future didn’t end up looking very futuristic, like my Popular Science magazines had suggested it might when I was a kid. Disappointing to see cars turn into big, anonymous silver-grey thumbs with wheels. Technology like cellphones I’d hoped would be two-way wrist radio/TVs, possibly so they’d be a little harder to lose. What I was hoping for was streamlining and gadgetry and chrome and that crinkly metallic-grey lustre. That’s what I find in my old friend Jimmy Descant’s Deluxe Rocketships. Jimmy was a guitar tech for the dB’s and went on to work with the Indigo Girls and many other artists. When I met him, he was repairing and restoring old pinball machines in his second-floor walkup in Metairie, La. That and the proximity to audio gear moved his artistry into accessorized microphones with lights. Rocket ships were not far behind. The grand imagination, whimsy and love that go into each vessel is always preeminent—dare you not to chuckle. After Hurricane Katrina destroyed the contents of his workshop, Jimmy and his wife relocated to the West, which is suiting his art well. Like Krazy Kat and the other George Herriman creations, Jimmy has landed there as if by UFO and has decided not to use his rockets to leave.

2 replies on “From The Desk Of Holsapple & Stamey: Jimmy Descant’s Deluxe Rocketships”

Thanks for the article Peter. The road life was an amazing journey of 10 years and will always influence me, and thrill people at the bars when I’m telling stories. The things I had seen and the talent I got to socialize with were astounding, and great to be a part of the db’s legacy.
Keep rockin’, and creating. Jimmy, Rocketman

Hello Peter and Chris,
Peter, You certainly were correct about the future not looking very futuristic, and more than likely it has something to do with; as the old adage says, “The more we are different the more we are all the same.” Combined with form and function. Especially when it comes to something as technologically demanding as cars. I ask you; How creative can you be with Drag coifficent/pwr-wgt ratio? (Spelling?)
In the heyday of futurism when “59” Caddy designers gave us the largest most beautiful tailfins the world would ever see. It was climatic. After that cars and art for the most part went thier seperate ways.
Now you go to a car dealer for a car and a art dealer for art. So folks, if it’s futurism your looking for check out my long lost artist relative Jimmy Descant’s one of a kind Deluxe Rocketships. Their cool. And remember to look for your own creative identity in the confines of decent reality. Just think, If we were all too much alike, “We’d probably all have to drive Chevys. Although we could opt for our own personal Rocketman hood ornamante.
Keep rockin’, and creating. I like it. Gene Descant