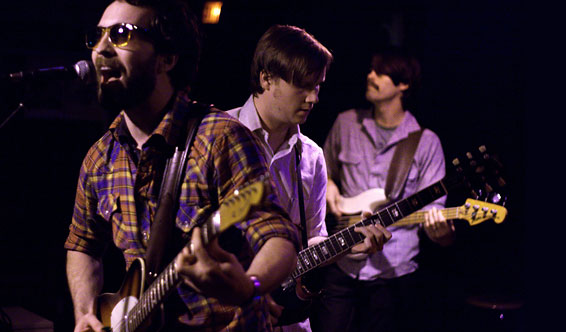 Peter: You Can Go Anywhere, Do Anything is Max Indian‘s debut album, self-produced and -marketed, which means don’t look for it at Best Buy. It has been a long time since an album knocked me out like this one has. The songs, written and sung by Carter Gaj, are what we like to call “Beatle-informed,” which means that they’re pop-rock of the highest order. The production is weird and swampy, as dark as Carter’s murmured vocals; whenever a tambourine or cymbal breaks through the darkness, it’s like lightning in a summer thunderstorm. There’s not a bad tune here. James Wallace co-produces and plays the clattering drums throughout. Anything resembling a rock cliché is turned just slightly askew enough to render it refreshed. It was brought to my attention that this record is mixed in mono. Does anyone really give a shit about that anymore? Me, I’m buyin’ the mono Beatle box, having just been gifted a download of the mono Sgt. Pepper’s Lonely Hearts Club Band and having reveled in that glorious clarity. Max Indian has only left my car’s CD player long enough to let Chris borrow it. Live video for “Heaven Help Us” after the jump.

2 replies on “From The Desk Of Holsapple & Stamey: Max Indian”

I too have listened to this literally hundreds of times. It’s an instant classic and one that needs to be distributed to every nook and cranny of the world. There’s something so timeless about the songs, production, and the whole feel of the album. I’m looking forward to a re-release of this album with the press that it deserves. Thanks Holsapple for getting this out there. I hope people give this record a chance and Max Indian can do a full blow tour.

I could not agree more! It does my heart good to read your comments about Carter Gaj and Max Indian, and the comparisons you make. Coming from someone of your reputation and credibility, your praise carries even more value. Nice writeup, Peter!