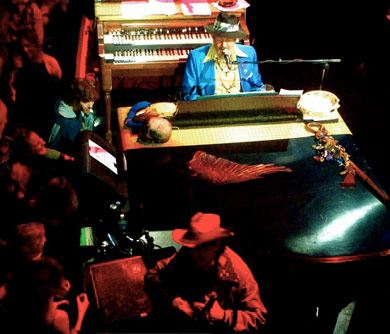 Peter: After Hurricane Katrina, former dB’s bassist Jeff Beninato and his wife Karen Dalton-Beninato relocated to the Midwest and set up the New Orleans Musicians Relief Fund with the displaced and distressed musicians of the city in mind. They have gotten help from Dr. John, R.E.M., Wilco, a host of local musicians and, of course, the dB’s in raising money and consciousness about the issues facing post-Katrina players in New Orleans. (Many lived in the devastated Ninth Ward.) NOMRF has been able to get pianos and horns to good homes, where they’re being used to learn and earn on. For all intents and purposes, Katrina is a dead issue to a world consumed by its economic upheaval these days; not so if you’re still in New Orleans, where the reminders color actions every day that most people take for granted. (Try cashing a check in a bank that lost all its signature cards in the flooding.) Jeff and Karen have made this charity a living example of how we’re supposed to behave toward our less-fortunate neighbors, continuing long after the waters have receded and keeping their welfare paramount.