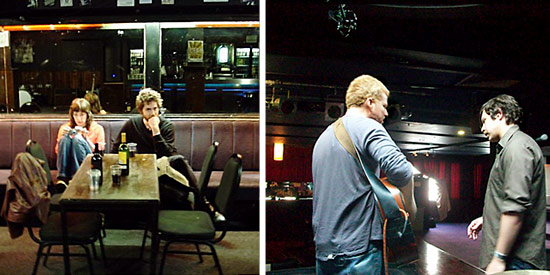 May 19
My early-to-bed routine has served me well. I’m up at 7 a.m. and doing my ablutions while Carl sleeps the sleep of the just got in a few hours ago from drinking. Soon, Alun shows up with the van. I don’t think he’s a tour manager or a van driver by trade. And that’s OK; this is a bare bones tour, and it’ll save us all a lot of money if we don’t hire a professional tour manager. I really can’t think of a more thankless job. You have to drive everywhere, keep track of everything and people are always asking you for stuff. I really should call my parents and tell them I love them.

When we get to the gear rental place, we find the amps are too big for the van. And, of course, the seats are bolted in and can’t be removed. Surely there were vans more suited to this kind of activity? Maybe not, I dunno. Frustrated, I walk away, all grumbly. Carl and Shane assume the roles of pack masters general. We head out of Manchester to our first gig in London. This band hasn’t played a full set together since early April, but I’m sure we’ll be fine. Our fifth member will be Kansas-based singer/songwriter Andrew Morgan; he’ll play keyboards and additional guitar, as well as open the shows. When we get to the Luminaire in the Kilburn section of London, we hunker down for a marathon soundcheck/rehearsal. Andrew has really done his homework, and everything sounds good. The sound guy is American and looks just like former Kiss guitarist Bruce Kulick’s older brother Bob. (I know what Bruce Kulick’s older brother Bob looks like. What does this say about me?)

I believe it was Winston Churchill who said, “It is times like these when copious amounts of wine could not be more of a help.” There’s that period between soundcheck and the show when time slows to a snail’s pace. Tonight there’s no time to get a proper dinner, so we snack on the rider (food and beverages provided by the club) and we break out the vino. I ask Alun if he’ll get us a corkscrew. “Please don’t judge me,” I ask. This is in reference to a conversation we had earlier today about a book I was reading: The Easy Way To Stop Drinking. It’s probably a typical rock ‘n’ roll story: I didn’t really drink at all until about 1996. Superchunk was on a long and dismal European tour, and I started drinking beer to pass the post-soundcheck/pre-show hours. It helped, but it kind of made me feel like a loser, like I wasn’t meeting reality on its own terms. And I guess I wasn’t. But when your reality is a dingy rock club on the outskirts of town, it’s easy to fall into this. When I look back on the last two years I’ve spent in constant tour mode, I see how I’ve sometimes gotten into the same pattern. My performances didn’t suffer, but I was definitely using that handful of drinks a night to alleviate the boredom and loneliness that goes with touring. And I know I’m coming to the end of the line of that train ride.

At this point, Andrew needs to get ready for his set. He seems a little nervous; I think he’s still a little new to this. He needs to warm up and proceeds to do just that, in front of us. He sings and plays one of his songs just as he will onstage. It is both impressive and unsettling. I need to leave the room at one point because it makes me uncomfortable; I really don’t know how to react.

Later: Now that’s what I’m talking about. A great show. The club was sold out, and we all had a good time. There were a couple small mistakes, and Carl made a big production of blaming the problems on “the new guy” (even though they may not have been his fault). It was all in fun, though, and at one point Carl apologized to Andrew on mic for “throwing you under the bus.”

Tonight we’re staying at another Premier Inn, this one’s in Didsbury, which, little known fact, is where 100 percent of the world’s plastic change purses are produced. (I just made that up.) As we park, I’m shocked to learn that Alun wants us to load all the gear into the hotel. Though I understand his not wanting to risk having the gear or van stolen, the idea seems insane to me. I’ve been doing this a long time and have never brought all the gear inside. Thankfully, he finds a secure spot to back the van into and I don’t get all crabby.

Now, let’s get some fooking sleep.

May 20
The van and the gear were stolen. Just kidding. We’re heading back to Manchester today to play a place called the Retro Bar. Sounds promising, yes? Oh, just you wait. We stop at a travel plaza that features a Marks & Spencer food shop. M&S is a cross between a convenience store and a Whole Foods; you can actually get salads and other good things there. There’s a magazine shop in the travel plaza and a cursory look at the rack reveals that “Britain loves tits.” They call them “lads’ magazines,” and there are at least five of them, like Maxim but with even more air-brushed fake breasts. One’s called Nuts, and this saddens me deeply. On the bright side, one look at the cover of the new issue of the NME has raised my spirits substantially: “The Arctic Monkeys Are Back And They Now Have Long Hair.”

Now, before we proceed, let me state that although I try my best to maintain a positive attitude on the road, I also quite enjoy bitching about things that get under my skin. I don’t know a touring musician who doesn’t. It’s a healthy and usually painless way to let off steam. That said, let’s go to the Retro Bar. Ah, yes, it’s all lining up:
Multi-flight downstairs load-in? Check.
Club so small there’s actually no need to mic guitars or drums? Check.
Tiny corner stage decorated with Jack Daniels posters? Check.
PA blasting Rage Against The Machine? Check.
No rider? Check.

There’s also the fact that the club smells like a fetid cheese made from the lining of Satan’s own running shorts. If I didn’t know better, I’d swear we were in a bar in State College, Pa., at closing time. I mean, if State College, Pa., was located in deepest Hades. This is going to be one of those “what am I doing with my life” kind of nights. We can all feel it. Thankfully, Alun rustles us up some fruit, chips and vino. And the sad fact is wine does make it better.

Post-soundcheck, Miranda, Carl, Shane and I head down the street to an Indian restaurant. It’s located next to the hotel I stayed in last May when I was here with Bob Mould. We had a night off and did the inexplicable, deciding against seeing the Jello- /Peligro-less Dead Kennedys in favor of hitting the town. We ended up in a kebab shop packed with wasted teenagers. I was mistaken for Dave Grohl and our bassist, Jason Narducy, started pretending he was my security guard. “Please, no phone cameras, people … give him some space, please.” I think I told someone we were “all going to Liam’s for a spliff or two.” Oh, the stunts you pull in your 40s.

After another winning Indian meal, we reluctantly head back to the Retro Bar. There’s maybe 35 people here tonight. It’s a real shame because I think the songs are great and so is the band. I experienced the same thing when I toured with Robert Pollard. Without the name “Guided By Voices” or “New Pornographers,” it’s unfortunately a different ball game. Even though it’s the same guy who wrote and sang the songs. Come on, people. The show is good, despite my snare-drum head literally breaking in half three-quarters through the set. Not from my Neanderthal style of bashing but from the drum’s misshapen hoop. (You guys love “drum talk,” don’t you?)

Now it’s back to the Premier Inn to watch a documentary about a 16-year-old girl trying to make her way into the totally awesome world of lads’ magazines.