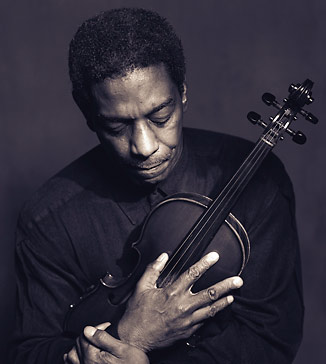 It has been said, as well as disputed, that Manhattan is ground zero of the jazz universe. The city has always done quite well providing the opportunity for diverse live jazz performances. With the long-running JVC Jazz Festival (formerly the Newport Jazz Fest) being cancelled this year—a grim sign of the times—the fact that a large, well-organized avant-garde jazz festival can still happen is something to be celebrated. On Tuesday night, down on the Lower East Side at the Abrons Arts Center, the 14th edition of the Vision Festival kicked off in suitably regal fashion. Percussionist Hamid Drake, singer/dancer Patricia Nicholson-Parker and the festival’s founder, bassist William Parker, provided an invocation for the event, revealing an earnest, retro-beatnik spirituality that will undoubtedly pervade the week’s festivities. Parker played an unusual-looking homemade electric bass while his wife danced and recited poetry and Drake supplied intricate waves of rhythm on a large hand drum. Parker later switched to an Eastern-made reed instrument, and Drake added his own voice to the plaintive invocation.

The first “band” to perform was Brass Bang, featuring veteran violinist Billy Bang (pictured) accompanied by three trumpeters, trombonist Dick Griffin and young Russell Carter on drums. Before the first number, Bang spoke to the audience, illuminating the relationship between violin and trumpet in jazz, which goes all the way back to violinist Stuff Smith imitating the trumpet lines of Louis Armstrong. Bang, who has been playing outré jazz since the 1970s, was mentored by the late Don Cherry, the elfin trumpeter best known for playing with Ornette Coleman. Bang’s compositions allowed for plenty of soloing by trumpeters Ahmed Abdullah, Ted Daniel and James Zollar, and the band finished its set with an arrangement of Duke Ellington’s “Take The ‘A’ Train.” Note: In the old days, Ray Nance played violin and trumpet for the Ellington band.

Keeping the beat vibrations flowing, multi-instrumentalist Douglas R. Ewart led a wooly band of players, along with noted black poet laureate Amiri Baraka. Baraka recited prose in bohemian style, accompanied by the flutes and saxophones of Ewart, J.D. Parran and Joseph Jarman, Thurman Barker on drums and marimba, and Donald Smith on piano. Ewart, Jarman and Barker are all noted veterans of the AACM (Association for the Advancement of Creative Musicians), which was formed in 1960s by free-thinking musicians from Chicago’s South Side. The Jamaican-born Ewart and his band maintained the bold musical traditions of the AACM, with Ewart, Baraka and Jarman all spouting joyous poetry in hip, irreverent style.

Next up: Wednesday’s highly anticipated showcase and lifetime recognition of saxophonist Marshall Allen, who will be playing a special set before directing the Sun Ra Arkestra, a band he’s been associated with for the last half-century. For those around Manhattan who can make it sometime this week, you can meet me at the jazz corner of the world.

[…] still going strong. This year’s Vision Fest kicked off on Tuesday — Magnet Magazine has a great writeup of opening night. It’s also nice to see some love for the VF over at Brooklyn Vegan. (The BV commenters also […]