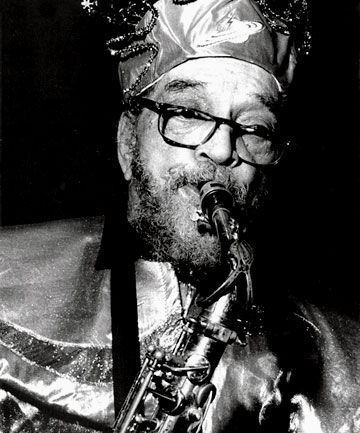 Things are starting to heat up at the Vision Festival, with Wednesday night being dedicated to the lifetime achievement of 85-year-old Marshall Allen (pictured), multi-instrumentalist and current bandleader of the Sun Ra Arkestra. One of the more distinctive alto saxophone players for the last 50 years (he began playing with Ra in 1958), Allen has kept the fabled Arkestra going since Sun Ra left this planet for the cosmos in 1993.

The evening began with Allen and aggregate Vision Fest all-stars—tenor player Kidd Jordan, drummer Hamid Drake and two powerful bassists, William Parker and Henry Grimes. Allen immediately set the controls for outer space, playing an electronic valve gizmo that echoed and manipulated synth-like phrases. The band was a killing machine with Drake at the center—flanked by Parker and Grimes, who plucked and bowed at will. Kidd Jordan, no spring chicken at 74, blew long, hard lines of tenor madness, echoing the spirit of Allen’s old Arkestra partner, John Gilmore. Allen duly summoned his ferocious alto to match the intensity of his amazing bandmates.

Bill Cole’s Untempered Ensemble was something of a letdown after the Allen band’s set, but the group persevered and converted some new fans with its indigenous world jazz. Cole plays Eastern-sounding double reeds as well as the didgeridoo. His daughter Althea’s singing voice wasn’t as strong as the musicianship on the stage, especially with Warren Smith on drums, but Cole’s insistent melodies interlaced with Joe Daley’s tuba and Smith’s drumming blended nicely with Atticus Cole’s percussion.

All of this led up to a rousing performance by the Sun Ra Arkestra under Allen’s direction. There were at least 20 people onstage, all wearing some small amount of glittering apparel. While not exactly resplendent in his sparkling red poncho and matching hat, Allen led the band with humble authority. Part of the Arkestra’s appeal has always been its organic amalgamation of spaced-out, avant-garde sounds, ancient-to-future philosophy and classic jazz traditions. Besides Allen, several other Sun Ra veterans were onstage, including saxophonists Charles Davis and Danny Thompson and bassists John Ore and Juini Booth.

The Ra set consisted of wild instrumental interludes, raucous big-band arrangements, ragtag singing and dancing and reconstructed jazz standards. Of course, one had to miss Sun Ra’s physical presence at a gig like this but his spirit was certainly everywhere. Personally, I was dismayed to note the absence of the Ancient Egyptian Infinity Drum. Still, the finale was big and nostalgia ran high, and the Vision Festival even presented Allen with an envelope containing some money. Hooray for our side!