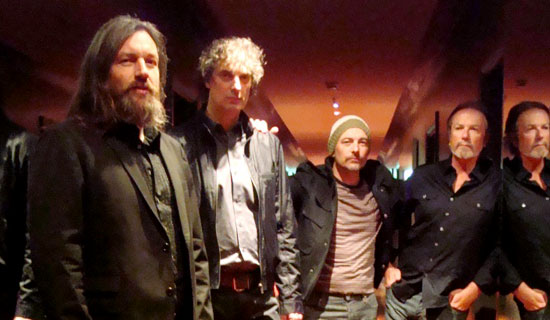 It’s a monumental occasion for faithful Oz-rock worshippers: The Church has once again returned to California. One of the keystone elements of college rock back in the ’80s, the Canberra-bred Aussie combo, led by bassist Steve Kilbey and guitarists Marty Willson-Piper and Peter Koppes, was once part of a dazzling Australian contingent that included the Saints, Radio Birdman, Hoodoo Gurus, Died Pretty, Celibate Rifles, Screaming Tribesmen, Stems, Scientists, Moodists, Lime Spiders and Sunnyboys.

Kilbey has a sunburned look these days, like he’s just returned from a couple of months in the Australian outback with Mel Gibson, shooting Mad Max XII: Burned To A Crisp, continuing the endless search for gazzoline in a post-apocalyptic wilderness. “Hello, I intended to have flowers in my hair, but they never arrived,” said Kilbey. It’s a dead giveaway for anyone who hasn’t seen them in a while, to the musical direction the set will take. Rather than the jangly, slightly Velvet Underground-inspired folk rock of Church classics like 1983’s “Electric Lash” and 1981’s “The Unguarded Moment,” it’s the dreamy psychedelia of the band’s current album, Untitled #23, heavily under the sway of David Gilmour-era Pink Floyd, that will daub your evening with shades of paisley.

If you’re a die-hard Church-head, you probably enjoyed watching Koppes (or a roadie who resembled him from the back of the barn-like Slim’s) tuning a small arsenal of guitars for the 50 minutes that preceded the set. Others might have preferred a dozen Popeye cartoons. Then there was the amp meltdown that brought things to a grinding halt for 15 minutes, about half an hour into the set. The breakdown seemed to catch Kilbey at a loss for standup material to fill the void. To kill time, he described the band’s drive north from Los Angeles, which must have taken a strange turn, indeed. Kilbey referred to both the Andersen’s Split-Pea Soup restaurant near Buellton on the coast-hugging Highway 101 and the cattle-staging area dubbed “Cowschwiz,” located near Coalinga. It’s actually the Harris Ranch, the major supplier of ground beef for the In-N-Out hamburger chain, and it’s deep in California’s central valley on Highway 5. You can’t take both roads. Then again, who’s to say the band who cut the enthralling “Two Places At Once” in 1994 couldn’t pull it off?

“Have you ever noticed, the farther north you get in California, the less you hear people shout out, ‘Play some rock ‘n’ roll!’?” said Kilbey to Willson-Piper. “They’re more sophisticated up here.” And play the Church did after the amp was fixed, although not the mindless party soundtrack some L.A. hecklers might have preferred. It was a treat to finally hear 1988’s “Under The Milky Way,” the grizzled Aussies’ sole American chart entry, played live. The last time I saw the Church, opening for Echo & The Bunnymen in 1986, the song was just a glimmer in its collective eye.

“Deadman’s Hand,” “Happenstance” and “Pangaea,” all from Untitled #23, are taken at a measured, Dark Side Of The Moon pace. It’s surprising to hear the Church has soaked up a bit of the Bunnymen’s essence over the years. Kilbey enriches the new songs with his 12-string, while Koppes’ slide work on “Happenstance” is exemplary. If the recent stuff isn’t as groundbreaking as its earlier material, the Church, like the Rolling Stones before it, should be granted a lifetime pass from creating spectacular new music. The band has already done plenty of that.

Most excellent review and it was nice to hear about all the ups and downs on the way there. You are seriously wrong about one thing though. The new material IS groundbreaking in it´s own subtle way and it doesn´t pale to anything else they have done before. Untitled #23 is a brilliant album with no weak parts and shows the band at the height of their autumnal powers. I know it´s usual to portray them as 80´s relics to casual listeners and it happens all the time but that is simply wrong. They are as vital and creative now as they were before.

What a pain those technical issues are for a professional band like The Church. Well its only the 3rd gig of a month long tour so looking forward to more tour reports. Would like to hear more about the songs played! Ive seen them in Oz and they were shit hot!
Maybe fans would like to see this stellar performance filmed on KCRW the other day – this is mind blowing http://www.kcrw.com/media-player/mediaPlayer2.html?type=video&id=mb090611the_church – enjoy the band that were voted for writing the most popular song in Australia!

Concert sounds like it was excellent — technical problem notwithstanding. But hey, you can’t put a price on an additional 15 minutes of Kilbey ad lib,can you? Very much looking forward to seeing them next month when they make their way to the east coast. The Church has been a favorite band of mine for years and they never disappoint in concert. Thanks for the review!

O America, you are truly in for a treat with this tour! Yeah yeah, sundry technical difficulties happen/occur/annoy… BUT… the new material on “Untitled #23” – so brilliant and transcendent! Blissful moments from across time beckon, weave, coagulate and smile… So ok… listen and love!

Tantalized began the night and it EXPLODED, you could feel the rushing energy flowing from The Church and hitting you in waves, I imagined that the front row looked like the “blow away” guy from the Maxell ads, the force was palpable as Slim’s room temperature spiked. Well, all of that energy must have blown something other than our minds because after the second song, Block, Tim’s equipment suffered a meltdown which lasted longer than a few minutes. Steve, Marty and Peter took this opportunity to story-tell and fool around with different melodies that seemed to want to morph into an improvised masterpiece if only given the time. While the mostly female stage crew (they rocked) ran around trying to set things right the audience maintained their “sophistication” and graciously waited for things to be sorted. It was a mutual love fest between The Church and the Slim’s audience, except when a couple of drunk guys became too verbose and brazen, but they were dispatched quickly by Steve’s action and wit. I enjoy it when someone is cleverly put in their place, insulted, so to speak in a matter that escapes the receiver yet thoroughly finds the mark with everyone else. Good times!
There were many, many highlights throughout the set with the guys going all out, uncorked, unabashed, unleashed, uninhibited, unreal, unfuckin’ believable! I sent out as much energy right back to them grateful for being able to bask in such an atmosphere of pure magic; I was (am) thankful that I never jumped off The Church Experience, thankful for my core feeling that slapped me in the back of my head and demanded I pay attention, thankful for my foresight which telegraphed me from the early ’80s that these musicians, men, artists were and would always be something extraordinary. Thankful for two decades + of music I could have never done without. Talk about feeling blessed. Enough of being nostalgic for now, wait, let me dry that tear in my eye…wink…there…
Let me just finish by saying that ALL of the songs were mini-musical land mines (classics sounding brand new, the new sounding like future classics), each one detonated with an intensity so excruciatingly powerful that the musical notes and words transformed into beautiful color making the night something that transcended dimension and reason. (tsk tsk all this hippie talk – hell, people I’m in San Francisco!)
One last thing: Space Saviour is so different from the record, it’s a blistering meteorite live – GET READY!

Anyone who claims that the band are not as ground breaking or as good now as they were in the 80’s isn’t really listening to what this band is doing. They have consistanly gotten better and better w/each new thing they put out, how many other bands that have been around almost 30! 30 yrs can make that claim?? When they come to your town or even close to it get anyone who has a clue and the headspace for down to the shows and help support this amazing band!

Like right on Ron Bonham. Too many reviewers just catchin up looking for a romp down nostalgia lane and then bustin them for it when it’s not there. Good stuff in the 80’s in context but nowhere close to where they are now for complexity and polish. They’re not coasting on the past and I wish some writers would catch up with that….Rawkon!!!!

Much of the band’s output over the last 10-20 years deserves the same accolades normally reserved for their better-known records from the 1980s — which are also great, of course. Well, OK, perhaps Sometime Anywhere and Magician Among The Spirits, the pair of mid ’90s albums recorded when the band was temporarily reduced to a duo, aren’t such killers. But you get the picture. How many bands remain this vital 30 years into their career? How many even try? Priest = Aura (1992) and After Everything Now This (2002) are two of my favorite albums — by anyone, not just the Church. Untitled #23 is terrific, as is the new Coffee Hounds EP. And Starfish still sounds like a masterpiece to me.
The world doesn’t need any more dreadful past-prime acts limping around the casino concert circuit; hats off to the Church for continuing to be so prolific — and so goddamn good.
As for the show, it was indeed excellent, particularly the encore — so much so that my lower back pain from standing for several hours on Slim’s unforgiving concrete floor disappeared when they closed with “Hotel Womb.” Adam Franklin’s opening set was also mighty fine. Like the Church, he’s another guy no longer in his youth who still gives a hoot about putting out vibrant new music.
(Geographical note: There’s a second Anderson’s Pea Soup in California, in tiny Santa Nella, not too far north from Harris Ranch along Interstate 5 in the San Joaquin Valley. Surely that’s the one Kilbey or Willson-Piper was referring to last Friday. It’s just as goofy as the one in Buellton that Mr. Cost mentions.)

Funny. I was at The Church show at the Roxy in Los Angeles and don’t recall myself or anyone else for that matter shouting out Free Bird or any other of my favorite mindless party soundtrack favorites. I guess the exact same set list just sounds different in San Francisco.