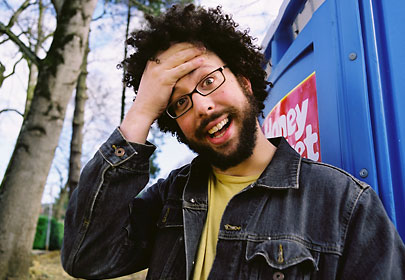 Nine different music mags/websites are each premiering a Golden Bloom track in the weeks leading up to the August 18 release of debut album Fan The Flames. That’s kind of like going to nine different theaters to watch different parts of Short Cuts. (There’s no way that movie was in theatrical release for that long.) MAGNET is proud to kick off the Summer of Golden Bloom, mainly because this album is redolent of mid-period Wilco; lead track “E.H.M.” sounds like an imaginary b-side to “Outtasite (Outta Mind)” featuring Scott McCaughey and appearing circa Summerteeth instead of Being There. Man, that was a lot of contortions for a Wilco comparison. Golden Bloom is led by Shawn Fogel (pictured) and features drummer Michael Azerrad, a music journalist whose Our Band Could Be Your Life recently became required reading for MAGNET interns unaware of the existence of Hüsker Dü and Big Black. That’s no way to go through life.

Golden Bloom is awesome. Their album is going to blow everyone’s minds as far as I can tell!

they’ll be at nxne in toronto this weekend.. Saturday night, midnight at the Cameron House

That sounds nothing like Wilco from that period, or any period. Good song, though.

[…] And for another song, head to Magnet Magazine for their exclusive premiere of “E.H.M.”. […]

Jay is right – we tried way too hard for the Wilco comparison, but only because the rest of the album really does warrant it. This lead track is kind of a power-pop anomaly on the record. Check out the other Golden Bloom tracks as they appear on various other sites in the next few weeks and maybe you’ll agree.

I hear more Lemonheads in this song than Wilco, but comparison aside it rocks!