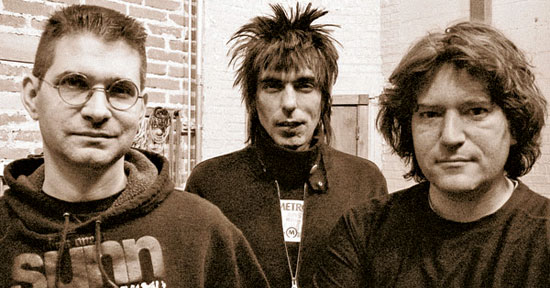 And, lo, there came a time upon the land, soon after the reign of Nirvana, when many rock bands took on names found on the labels of empty containers that filled the dumpsters of industrial construction sites. And among the hardiest, yet most confounding of these to some, was the group known as Shellac.

I sampled (and eventually discarded) the wares of many of the noisy new bands I found in the pages of MAGNET when I began writing for the mag in early 1995. Chokebore, Unsane and the Jesus Lizard all eventually fell by the roadside. But Shellac‘s 1994 album, At Action Park, turned out to be a keeper. There was something brutally honest about that record, cut by famed alt-rock engineer Steve Albini on guitar, bassist Bob Weston and drummer Todd Trainer. Fifteen years later, here was the same trio back on the prowl. I donned hard hat and eye protection, slipped a six-pack of earplugs into my pocket, grabbed my lunchbox and headed off to the job site.

I’d seen one of Albini’s previous combos, Big Black, at San Francisco’s I-Beam in the summer of 1987, and since my ears only recently have stopped ringing from that very loud night, I knew what I was in for. But there comes a time when you’ve had it up to here with eccentric, bearded neo-folkies. You have to get your brain laundered. As expected, Shellac’s show is a no-bullshit affair: no chatter between songs, no choreographed stage moves. With lyrics all but indecipherable, Albini’s vocals could have been the shrieks emanating from the nearest urban gunshot-wound emergency trauma center. The only concession to planned hysteria tonight is the set’s opening sequence, with Trainer pointing a drumstick to the heavens to conduct a slow-motion slide into the first tune, whose thundering opening chords after this brief pantomime are a real sinus-clearer. There was one song intro that hinted at the minor-key, surf-guitar pyrotechnics of Dick Dale. Other than that, it was pure Albini, a man who may look like a tax accountant, but has your H&R Block dude ever twiddled knobs for acts that range from PJ Harvey, Cheap Trick and Joanna Newsom to the Pixies, Superchunk and Dirty Three? Toward the end of the set, Weston asked for questions from the packed house. The only good one was: “Is Todd still sponsored by Calvin Klein?” to which Weston answered, “No, but he’s getting blown by Christy Brinkley.”

Almost every time I walk around the faux-painted marble columns inside the ornately Edwardian Great American Music Hall (built in 1907), it reminds me of the Barbary Coast joint where Clark Gable and Jeanette McDonald rode out the first shocks of the legendary 1906 earthquake in the 1936 film San Francisco. After a night of Shellac at its most punishing, it looks like the old club might be good to go for another 100 years.

This review is a prime example of why i stopped reading Magnet, and it’s nice to know that after countless years away nothing’s changed.
First up, if the reviewer is apparently into Shellac, but yet has somehow managed to let the Jesus Lizard fall by the wayside, then i suggest his decision making skills are somewhat flawed.
Taste’s aside, i’ve seen Shellac on numerous occasions now, and as much as i love them, it most definitely IS a SHOW. Todd’s drumstick thing? He does it basically every set, along with a whole host of other routines that Steve & Bob get involved in too – one of which is Bob’s question time. Has the reviewr not seen them before?
Don’t get me wrong i still love Shellac & always will, but this reviewer has missed the mark so spectacularly i’m suprised he even knows who they are, something that seems almost plausible after reading that Shellac apparently happened in the aftermath of Nirvana, despite the fact they’d released a handfull of 7″ before Kurt blew his head off, a fact Kurt was well aware of as he hired both Steve & Bob of Shellac to engineer In Utero.

Oliver, nowhere does the writer say the drumstick thing or the question-and-answer session were a first-time occurrence.

Also, I don’t think it’s a stretch to say that Shellac and many other noisy guitar bands “happened” in the aftermath of Nirvana—whether you take “aftermath” to mean after Nirvana’s rise to popularity or after Cobain’s death. Certainly Albini didn’t need Nirvana in order to begin making music, but that is not implied here.

This Oliver Ward guy is a freak…Why can’t I like Shellac and not Jesus Lizard? Brace yourself Oly, I do.