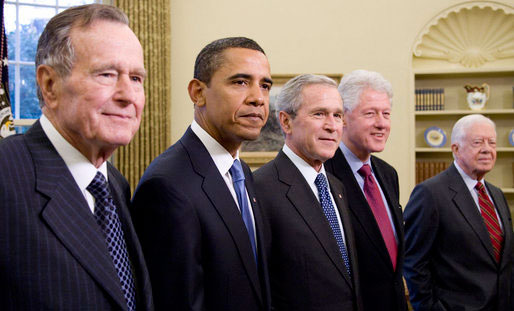 Sir Mix-A-Lot: Watching this political cycle has been interesting. America seems to cycle with the sunspots every 11 years. In 1979, America was dealing with another economic meltdown under Jimmy Carter. Feeling that Carter was way too liberal, America went hard right, and in came Ronald Reagan. A tough guy with tough-guy rhetoric, cutting items out of the budget like crazy. Some suffered, but others absolutely loved it. America (at least some of America) was getting its money on! Well, almost on schedule, the economy floundered again. This time, I was old enough to take advantage, buying two homes in 1989. “A thousand points of light” and “no new taxes” couldn’t change the economic sag. So in 1992, America went for the change again, and in came Bill Clinton. Smooth, pragmatic and young, Clinton came in and immediately started moving America back toward the center. Or did he? Some say the Republicans had a lot to do with that when they took over in ’94. Newt Gingrich and the “Contract With America” Republicans, along with Clinton, got the budget balanced. Dot-coms were sprouting up all over the place. America was once again getting its money on! But with the Monica scandal, Republicans saw an opening with an otherwise popular president in Clinton. Most of us (under 50) didn’t give a damn about Clinton’s sex life, but the Republicans used the issue to awaken their base. So here comes George W. Bush. Promising to restore dignity to the White House? This is where the cycle went off course, in my opinion. For the first time since I started paying attention to politics, America changed course for no apparent reason. The budget was balanced, and we actually had a surplus.

The dot-com bubble busted, 9-11 happened, but those things seemed to only make relatively small ripples in the economic landscape. A huge real-estate bubble began with (at the request of many politicians on the right and left) unrealistic loans given to low- and middle-income families. Simultaneously, America began a war of choice, nation building, exporting capitalism and torture. The budget surplus was quickly squandered, and Bush (being a wartime president) was re-elected. The real-estate bubble busted big time, and we were in the midst of two wars with neocons running everything. Although this cycle skipped a beat in 1999-2000, it dipped like a mofo in 2007. America once again was looking for change. This time, there was a new generation of voters who were looking for someone more pragmatic with less tough-guy talk and more logic. In comes Obama. Faced with more B.S. that any president I can remember, Obama has come into office swinging for the fences. Doing most of what he promised to do while campaigning (very rare). His chapter has yet to be written, but one thing is for sure: These cycles have all been real. Only one thing can change things for the better: the consumer! In my opinion, consumer confidence is what pulls America out of its predictable economic downturns. Not politicians. Necessity breeds creativity. Windmills, solar panels, lithium-ion batteries, etc. Let the green bubble begin!