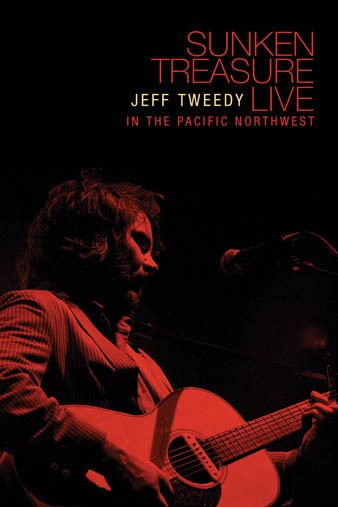 With this week’s release of Wilco (The Album), there’s no better time to reconsider Wilco’s steady progression from scrappy alt-country forebears to kings of the AAA charts. Since each of Wilco’s studio albums has been pored over, criticized and deconstructed countless times, MAGNET’s Matt Siblo looked toward the band’s output on film. Watch as Jeff Tweedy can’t afford to buy Wendy’s for his hungry child! Marvel at guitarist Nels Cline’s inability to wear pants that cover his socks! See the Tweedy household and all of its bric-a-brac! And wonder at who’s been supplying this band with such awful beanies for the past decade. Today’s feature: Tweedy’s 2006 Sunken Treasure: Live In The Pacific Northwest.

Technically not an official Wilco film, but let’s not kid ourselves. A couple years removed from the drama surrounding Yankee Hotel Foxtrot and 2004’s divisive A Ghost Is Born, Sunken Treasure follows a scraggly-looking Tweedy licking his wounds on the road after a well-publicized stint in rehab, a topic he’s not shy about broaching throughout. Solo, his persona can at times be both more serene and intense, which gives way to some heartwarmingly earnest banter and a prickish freak out in Portland, Ore. Regardless of his noble intentions at community building, Tweedy comes across as the headmaster of a ballroom scolding his impudent pupils for talking out of turn. In his more relaxed moments, Tweedy seems to savor the freedom from the increasingly weighty responsibilities and magnitude that a Wilco tour has come to assume.

The first full-length collaboration with Christoph Green and Brendan Canty (they first worked together on the Chicago edition of Burn To Shine) bears all of the hallmarks of the duo’s filmmaking style, with its wide roadside shots highlighting the mundane beauty of life on the road. At the beginning of the film, Tweedy says that playing onstage by himself is like listening to the voices in his head calling out from the blackness of an abyss. These shrieks take center stage at every performance; whether it’s a profession of love/marriage or a curious non sequitur, Tweedy laughs both with them and at them in a tenuous effort to maintain composure and control.