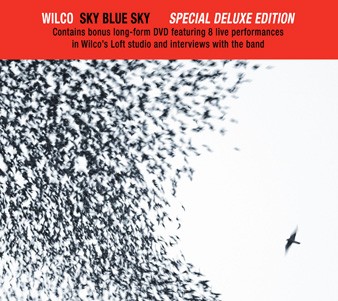 With this week’s release of Wilco (The Album), there’s no better time to reconsider Wilco’s steady progression from scrappy alt-country forebears to kings of the AAA charts. Since each of Wilco’s studio albums has been pored over, criticized and deconstructed countless times, MAGNET’s Matt Siblo looked toward the band’s output on film. Watch as Jeff Tweedy can’t afford to buy Wendy’s for his hungry child! Marvel at guitarist Nels Cline’s inability to wear pants that cover his socks! See the Tweedy household and all of its bric-a-brac! And wonder at who’s been supplying this band with such awful beanies for the past decade. Today’s feature: 2007’s Shake It Off.

This 45-minute companion piece to the deluxe version of Sky Blue Sky (also available on Netflix for those so inclined) is the antithesis of the probing exploration of I Am Trying To Break Your Heart. When not capturing the band work out new material in its famed practice loft, the film mostly consists of interviews with Tweedy at his home, an abode made to look like prime property for a visit from Antiques Roadshow. Shake It Off channels the sleepy sentiments of Sky Blue Sky writ large. Departing from the abstraction that engulfed A Ghost Is Born, Tweedy continues his descent into unadorned populism, commenting that when writing this album he was inspired to “sit down and sing people some motherfucking songs.”

This concept of simplicity and straightforward sincerity is echoed by his bandmates, whether it’s Glenn Kotche wanting to “let the songs be what they are” or Nels Cline rattling off unexpected musical influences that seem to surprise even him as they come out of his mouth. Directors Brendan Canty and Christoph Green’s sensibilities feed off the album’s themes of austerity in shades of a dreary Chicago sky and the fading sunlight that creeps into the loft’s windows. The performances here are subdued and tentative. For those who would come to criticize Wilco’s current incarnation for its overtly disciplined approach, these demos only reinforce the band’s newfound sense of professionalism or rigidity, depending on your opinion.

Tweedy references the increasing comfort and distress he feels with his group becoming an institution and gives off a sense that, after years of cynicism, having a successful band and a supportive wife (one highlight stems from a frank discussion about his marriage leading into a heartfelt rendition of “Patient With Me”) still seems unfathomable even as his successes continue to compound. He summarizes his good fortune by stating that he doesn’t “have to trade health for creativity” and that internal agitation isn’t a necessity for producing great art. Consider that myth officially debunked.