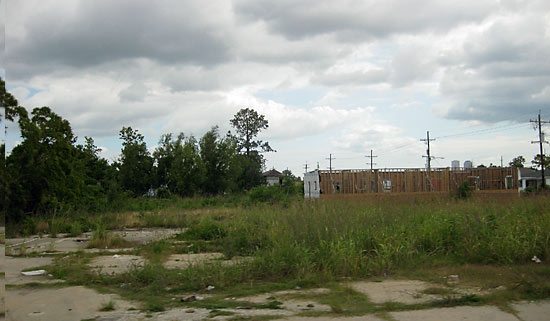 McCaughey: I recently attended a retreat in New Orleans sponsored and led by the Future Of Music Coalition and Air Traffic Control, with the added participation of local organizations like Sweet Home New Orleans. There was sort of a dual purpose to the gathering: facilitating activism in the music community, as well as showing how local activism in New Orleans is helping the city and its musicians recover from the disaster of Katrina. We spent time at Ernie K-Doe’s Mother-In-Law Lounge, visited and sang with Big Chief Iron Horse of the Black Seminoles Mardi Gras Indian tribe and toured many of the city’s most devastated areas. I’ve been to New Orleans five times since 2005 and have been both frustrated and encouraged by what I’ve seen. As we drove around the Ninth Ward in May, we saw acres of empty lots that had once been bustling neighborhoods. Yet we also saw clusters of bright new homes, thanks to Habitat For Humanity (a “musicians’ village” where many exiles have relocated) and Brad Pitt’s Make It Right. And yes, there is still food, booze and music, and there always will be. More on that later this week!

One reply on “From The Desk Of Scott McCaughey: Future Of Music Coalition Artist Retreat, New Orleans, Part 1 (Post-Katrina Update)”