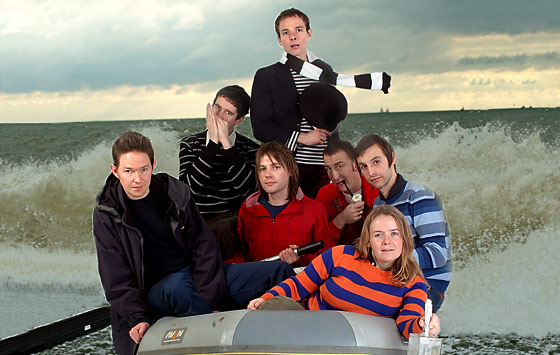 Belle And Sebastian started its steady climb into the hearts and minds of thousands of bookish romantics around the world in 1996, with the Stow College-funded recording sessions for debut album Tigermilk. Thirteen years later, frontman Stuart Murdoch has led B&S from a quaint twee sound into experiments with full-fledged glam, Lee Hazlewood/Nancy Sinatra-style balladry and lush, ’60s-inspired pop. Murdoch has further expanded on his unique vision through the project known as God Help The Girl, a movie musical he conceived, wrote and is helping bring to the silver screen. With the soundtrack already on the shelves, it seemed time to assess the work of Murdoch’s band and see which songs are underplayed and which are played out. (Read our 2006 Belle And Sebastian cover story.)

:: The Five Most Overrated Belle And Sebastian Songs
1. “This Is Just A Modern Rock Song” (1998)
This plodding, nonsensical number—the title track from an otherwise fine EP—takes a good seven minutes to arrive at nowhere. Notable mostly for a bizarre and wholly unnecessary breakdown in which Murdoch dolefully calls out individual members of the band, naming their prevailing personal traits (“Stevie’s full of good intentions/Richard’s into rock ‘n’ roll”). Irony be damned, this track is neither modern nor rocking.

2. “Piazza, New York Catcher” (2003)
The only cold spot on Dear Catastrophe Waitress, the band’s collaboration with producer Trevor Horn. It’s a lightweight number plugged up with odd lyrical turns referencing former Mets catcher Mike Piazza’s “questionable” sexuality. And unlike other flimsy lyrical turns by Murdoch, this track can’t be redeemed by a sparkling pop arrangement. With only an acoustic guitar as accompaniment, Murdoch has nowhere to hide.

3. “Like Dylan In The Movies” (1996)
A failure in both lyrical and musical execution, this track features a groan-worthy reference to Dylan documentary Don’t Look Back and instrumental backing that sounds like it’s bored of hearing itself. B&S must have agreed, as the live version (as heard on 2008’s The BBC Sessions) is far more potent and groovy.

4. “The Blues Are Still Blue” (2006)
One of Murdoch’s strengths has always been his fey singing voice. So to hear him try to come off as gruff and glammy on this track is, frankly, embarrassing. The band’s faux-glam backing track, which cribs directly from the Slade playbook, doesn’t help matters at all.

5. “Is It Wicked Not To Care?” (1998)
Considering the wonders she has created in her solo career, leaving B&S might have been the smartest thing Isobel Campbell ever did. Especially when you consider that the best B&S could do with one of her tunes was yet another half-asleep version of twinkle-toed twee pop.

:: The Five Most Underrated Belle And Sebastian Songs
1. “The Loneliness Of A Middle-Distance Runner” (2001)
As with many British groups, some of Belle And Sebastian’s best work is tucked away on the b-sides of its 12-inch singles. Case in point this positively dreamy little tune, anchored by a very ’60s organ hook and some of Murdoch’s most emotional vocals.

2. “I’m Waking Up To Us” (2001)
When Murdoch is on, lyrically, there are few who can match his wry takes on the love song. This is quite possibly his best effort in that regard. Free of the band’s sparkling take on Arthur Lee-like pop, his somewhat sordid, somewhat endearing tale of two star-crossed souls is the equal of novelists like Ian McEwan and Martin Amis.

3. “Sukie In The Graveyard” (2006)
Murdoch is also brilliant at creating vivid, short-story scenarios for his songs. It’s a very British affectation but one that serves this band particularly well. Take this vaguely funky tune that taps into the mind set a malcontented teen with artistic talent to burn. Sukie should be the dream girl for every misunderstood youth.

4. “I Fought In A War” (2000)
The band’s fourth album, Fold Your Hands Child, You Walk Like A Peasant, is one that even diehard B&S fans rarely take off the shelf. If nothing else, they should at least reacquaint themselves with the LP’s opening salvo, a gorgeous lament from a man sent into combat. Positively heartbreaking stuff.

5. “Wandering Alone” (2002)
Another portion of the B&S catalog that tends to get glossed over is the rejected soundtrack work they did for the Todd Solondz film Storytelling. The resulting batch of instrumentals and original tunes is a bit muddled, but it does feature this rumbling, bolero-influenced beauty led by guitarist Stevie Jackson.

11 replies on “The Over/Under: Belle And Sebastian”

Fold Your Hands is their masterpiece. B&S hardcore fans may not like it much, but I think it’s one of the best albums ever released.

i’d argue that its Murdoch’s posturing that makes “Blues Are Still Blue” so memorable.

all Sinister tracks sound better on the Don’t Look Back recording at the Barbican.

You’re right on everything except for “Is it Wicked Not to Care?” That song is like dew drops from heaven.

This is over/under is so predicatable. In fact, I am actually bored with it at this point. Magnet is such a good magnazine…..Think of something new. PLEASE!

I would say the whole Fold Your Hands album should be on the underrated list. The only thing I ever hear about it is that it is no good. I think it’s great and thus a pretty obvious choice for underrated.

I think that The Blues Are Still Blue isn’t that far removed from Sukie. That entire album is a little more muscular than previous efforts, and I fail to hear the “gruff” affectation in Murdoch’s voice. I’ve also heard plenty of detractors saying ‘enough is enough’ regarding his fey vocals, so don’t shoot him or the band for stretching out a little bit into new territory. Great artists don’t produce the same album over and over, sometimes to the frustration of their fan base, but I think this song and album is a winner. Look at other bands like My Morning Jacket, Wilco, The Kinks, etc, and think about what their discography would be like if they never showed any change or development from their initial sound.

As a general comment, this category seems to really be losing steam, not bases on the reader post, but on the initial knee-jerk reactions of the Magnet writing staff.

For that matter, the song “Storyteller” from that soundtrack is also excellent. “Piazza New York Catcher” is one of my favorites because it is so obsessive and it has that great part about the statue of Willie Mays plus the bit about players and managers trying to maintain their religious practices. I think you’re being rather harsh on this song.

I personally really dig both Fold Your Hands AND Storytelling. Two more under-rated songs from both: Don’t Leave the Light On Baby and Black and White Unite. I also love all the instrumentals on Storytelling – I feel like the band gets a bad rap for trying something different.

I’m a big fan of the band and I totally agree with this list!

I especially have to agree on the Storytelling tracks. If you took just the songs with vocals from that “soundtrack”, you’d end up with an incredible Belle & Sebastian EP.

Personally, I think you’re missing out “The Rollercoaster Ride” from the underrated section. Overlong perhaps, but a beautiful listen.