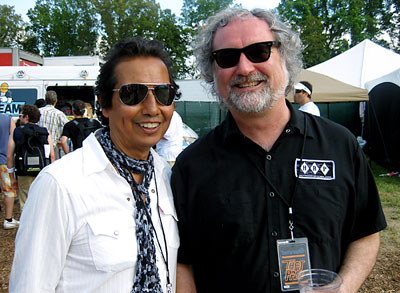 McCaughey: Last month, I finally experienced Bonnaroo firsthand, if only for a day. I hope that counts. It seemed like quite a lot, actually. I managed to play a show (Robyn Hitchcock & The Venus 3, introduced by Beatle Bob!), catch a good part of sterling sets by Alejandro Escovedo (pictured with me), Wilco, the Decemberists, Booker T And The Drive-By Truckers and Elvis Perkins. Even at that, I missed a lot I would have loved to see: Allen Toussaint, Jenny Lewis, Of Montreal, Elvis Costello. The lineup that day was phenomenal. You really needed to be four people to catch it all. I was all set to top the day off with Bruce “Thee Boss” Springsteen And His E-Street Shufflers, but overzealous main-stage guards, fatigue and the attraction of Patron and friends on Wilco’s bus conspired to make it an “audio-only” event. Also, I must say the pageantry of the festival-goers should not be underestimated; one of the great benefits of scurrying through the dust and/or mud from stage to stage is the spectacle you view on the way. All festivals by their very nature will provide unpleasantries, but Bonnaroo was a lot of fun—they seem to do it up right. They need more recycling bins, though. Video after the jump.