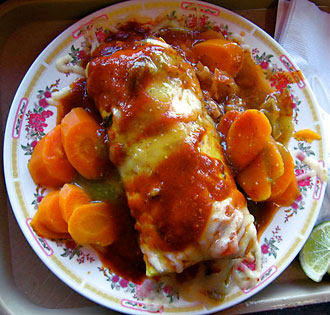 McCaughey: Portland is known for nudie bars, Nike, Powell’s Books and let’s not forget the Shins, Decemberists, Quasi, Viva Voce, Dandy Warhols, Stephen Malkmus And The Jicks, Modest Mouse, Richmond Fontaine, M. Ward, Menomena, Sleater-Kinney, etc. Yes, the music scene here is awesome, and that isn’t the half of it. But almost as important (and intertwined perhaps?) is the abundance of most-excellent taquerias and taco wagons in this fine city. In my old neighborhood, I could walk to any of three Alberta Street establishments within a couple minutes and be in burrito heaven. For a while, there were also two carts camped out in the same eight-block strip. This was actually ridiculous and certainly not fair to the rest of the universe. So on your next journey to Portland (it’s on the way to everywhere!), check out La Bonita, La Sirenita and Don Pancho on NE Alberta—or any of the hundreds of other bean-and-carne oases scattered about the city. They will treat you right.

One reply on “From The Desk Of Scott McCaughey: The Taquerias Of Portland, Ore.’s Alberta Street”

Scott is right about our little mobile Tex-Mex scene — Don Pancho in particular is amazing, and he didn’t even get to NON-Alberta neighborhood places like Esparza’s on SE Ankeny (one of the best jukeboxes in town, too). The PDX: it’s about indie rock, coffee, cycling and… mobile taquerias.