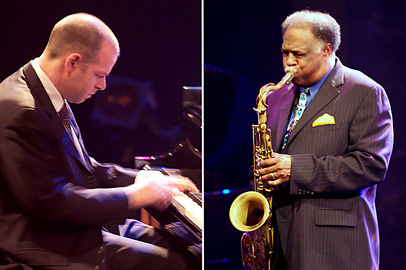 Pianist Bill Charlap is an archetypal traditionalist, a 40-ish balding dude who wears a suit and is most at home playing music from the middle of the previous century. In many ways, the straight-laced Charlap is an exact polar opposite of loose-goose piano all-star Brad Mehldau. Once a child prodigy who studied classical music, Charlap has been working the trad-jazz route for decades and even made an album with his mother. Charlap paid his dues backing singers like Betty Carter and Tony Bennett before forming his own remarkable trio and has been recording as a leader since the mid-’90s. He’s certainly one of the more celebrated pianists working today—the point here being that he could’ve showcased anyone that he wanted to bring to the Montreal Jazz Festival, and Charlap imported veteran tenor saxophonist Houston Person for an evening of intimate duets.

Born in 1934, Person is a generation ahead of Charlap in terms of years, but he’s right on the pianist’s wavelength in terms of music. A old-fashioned “boss tenor” player in the tradition of Gene Ammons or Zoot Simms, Person is remembered for his soul/jazz albums on Prestige in the 1960s and best known for his duo with late singer Etta Jones, who he worked with for 30 years until her death in 2001. Charlap has played on Person’s more recent recordings, and if you’re interested, there’s a fairly comprehensive three-CD set of that stuff called The Art & Soul Of Houston Person. Thankfully, the Charlap/Person show in Montreal was a late-night affair at the cozy Gesù theater, where the twosome showed the sensitivity, skill and nuanced playing that’s a hallmark of both their careers.

“We’re just going to play some good old music,” Charlap told the audience. Then he turned to Person and said, “What do you want to play?” They proceeded to stroll through a number of lovely old standards including “I’ll Remember April,” “Memories Of You,” “Once In A While,” “Don’t Get Around Much Anymore” and “Now And Then.” Charlap took an amazing solo turn, then Person did the same, playing an old blues written by the great Percy Mayfield. Both Charlap and Person have devoted their lives to listening and resonating with other musicians in a supportive fashion. As a result, this was a sweet, rarified evening of classic jazz by two incredibly sympathetic players. I don’t have anything else to say except that the festival is winding down slowly, and so am I.