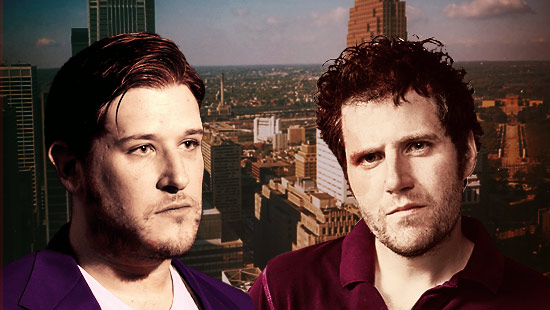 Given MAGNET’s detailed coverage of the end of the Mendoza Line—a beloved, ragtag countrypolitan bar band that went up in flames in 2007—it only seems fitting that we have plenty of access to the formation of the Jescos, the new group featuring the Mendoza Line’s Timothy Bracy. Called into action by Tennessee singer/songwriter James Jackson Toth (who records under his own name as well as the monikers Wooden Wand and Wand; the latter recently released Hard Knox), Bracy headed south with singer Elizabeth Nelson (the two recently married) to join forces and record Remembrance Of Things Trashed. Though the band is currently without a label or firm release date for Remembrance, that hasn’t stopped the Jescos from gutting it out for rock ‘n’ roll glory; a pair of songs posted on MySpace—”Unsafe On Any Speed” and “DSM-IV”—suggest Bracy has found his rambling pub-rock foil in Toth, as well as a new cast of supporting musicians and drinking buddies. Toth and Bracy will be guest editing magnetmagazine.com this week. They’re being paid in Miller Lite.

MAGNET: The Jescos seemed to form in public. From the early blog posts in March to the video on MySpace of you guys working on songs for the first time, it’s all there for everyone to see. Did you two think about this beforehand, about wanting to chronicle the way the band came together?
James: Ah, you’re trying to get me to use the word “organic,” but unless we’re discussing produce, that’s a word for douchebags. Elizabeth had the idea to document the process and I’m glad she did. Isn’t everything public nowadays anyway?
Timothy: For better or worse, it is so easy and cheap to make a record of rehearsals and generally process these days. When we did the Mendoza Line, we really did a miserable job of visually documenting anything. We just didn’t give it any thought. I sort of regret that in retrospect, because I think for fans it’s fun to go look at old clips on YouTube or what have you. I’ve definitely killed days happily looking at old Replacements or Faces footage. And so I think in a casual way we just wanted to give ourselves the option of presenting a visual element to the process. It’s so simple to do with an $80 Flip or whatever, there is almost just no reason not to. Well, there actually probably are reasons, but you get the idea.

Of course, there are lots of missing pieces to the story. How did Tim wind up in Tennessee? How did you two meet?
James: We met via email, over football, mutual friends and my almost unhealthy obsession with the Mendoza Line, one of my all-time favorite bands. I always assumed it would work. Tim was at the top of a short list of people I always said I’d drop everything to be in a band with. I know the words to every Mendoza Line song. Anyway, we talked a lot, as dudes do, about doing a record together someday. One day, feeling restless, I pitched it: You guys pay to get here, I’ll pay for the studio time, that sort of thing. Well, with a little bit (read: a lot) of encouragement from Elizabeth, Tim called my bluff, and soon the two of them were booking flights. Talk about a leap of faith. So I hastily put together what I now think is the best band in middle Tennessee.
Timothy: James was exceedingly persuasive. He said there would be whiskey, Miller Lite and deli trays. He said he “knew some guys” and that one of them was Bingham Barnes, who I had met before and whose band Glossary I liked a lot. I’d been to Murfreesboro before and always had an exceedingly weird time there. I said to Elizabeth, “You want to do this? It’s probably going to get weird.” She said, “Absolutely, lets go!” So we went. It was great. I always loved James’ songs. He is one of our top guys, like Will Sheff or Dan Bejar or Scott McCaughey. You always go work with someone like that when they ask.

MAGNET readers know James from Wand and Tim from the Mendoza Line. What made each of you want to jump into an unwieldy, multi-headed group like the Jescos? James, you’re coming from a solo thing—what drew you to this?
James: I’ve been in many bands before, but haven’t played in a proper rock band since high school. I loved that I’d be sharing songwriting duties with someone who, to my ears, is a far better songwriter, so that I’d feel encouraged to bring my A game, as it were. The concept was lyrically driven rock ‘n’ roll in the great tradition of the Replacements, Elvis Costello, etc., and I think the album is a positive step in that direction.

Tim, you were in this kind of band for more than a decade—what brought you back to this kind of arrangement?
Timothy: Well, James and I correspond a lot about football and songwriting and records, and I think we shared an aesthetic sensibility about what we like, but also what we thought was in a bit of short supply in contemporary rock music. We’re both big fans of intelligent pub rock that also has a sense of fun and humor and history: Graham Parker, NRBQ, this kind of thing. I think we both were sort of disposed to put together a band that could capture that sense of unselfconscious energy, that could have resonance without the sort of overtly confessional emphasis that is frequently the coin of the realm in songwriting circles these days. There are tons of superb bands out there—Hold Steady, Drive By Truckers, New Pornographers—but there is also a sometimes a sort of obsessive, arrested collegiate misery that characterizes a lot of our contemporaries. You know, I guess Bon Iver is great and everything, but I remember James saying something that really stuck with me about this whole narrative of going up on a family farm for a long time and writing an album about your ex-girlfriend. He said, basically, is that really an achievement to do that in isolation and leisure time at your family farm? Try writing that record in the break room at Wal-Mart. Now that’s a challenge.

Can you give us a rundown on who else is in the band and what they do? I remember Clint Newman from the Mendoza Line playing an excellent guitar or two. Bingham Barnes on bass. And I gather that Elizabeth Nelson sings. Anything laudatory or derogatory you’d like to mention about your bandmates, feel free to do so.
James: Elizabeth sings but also plays piano, organ and accordion. She also helps arrange, co-wrote many of the songs and is generally a charter member of the band. It literally wouldn’t have happened without her. Ask her about her obsession with RuPaul. Bingham Barnes plays in Glossary, works the printing press and has a beard. He’s the diva of the group, for sure. Tyler Coppage plays in We Were The States and is the star pitcher of our local Wiffleball league. Brian Lowery is an excellent harmonica/steel player from West Tennessee and a great singer/songwriter as well and can also get your truck running when you think all hope is lost. He’s mostly in the band because he can keep up with us, drinking wise. Clint Newman is one of the greatest guitar players I’ve ever worked with and holds his own on the football field. Tim loves Tiger Woods. That’s literally the first thing I think of when I think of Tim. Tim Bracy = Tiger Woods.
Timothy: I have a little Tiger Woods problem. I’m not going to dispute that. I have pictures of him in the house, and I talk about him a lot. Sometimes, when I feel bad, Elizabeth cheers me up by allowing me to pretend that Tiger and I are good friends, and that he and I and Jason Campbell from the Redskins are all going to meet up for microbrews. So, to the issue of transparency, that’s on the table now. James just threw together all of these great players. Bingham, Tyler, Brian—one after the next. It seems like you can throw a rock in Murfreesboro and find an enormous talent. All great guys as well. I guess I was a little surprised by Bingham’s cape, but you come to understand that he plays better when he feels he looks the part. And he plays ingeniously. I don’t like playing in bands without Clint. I play in Bird Of Youth with him as well, which is fronted by Beth Wawerna, one of the best songwriters I‘ve heard in years. [And a well-loved former contributor to MAGNET —Ed.] Clint is just a pleasure to listen to and to be around. He’s one of those guys that can play anything fancy you want, but mostly just makes everyone else sound better.

What are some of the finer attractions in Murfreesboro, where the Jescos are based?
James: Only a few of us live in Murfreesboro: Bingham, Tyler, Brian and I. I can only speak for myself, but I’ve been to every major American city at least twice and this is where I choose to live. I may roam a bit, but I’m planning on dying in Tennessee, one way or another. Maybe even soon. Middle Tennessee is great: low cost of living, great people, great food.
Timothy: I don’t know the city well, but I’ve been certainly been intrigued by its mysteries. There are a few unmarked graves near James’ home—I mean, not in a cemetery. I asked James what that was about, and he said he hadn’t ever looked too closely. He said he was afraid they might say: “Here Lies The Jescos.” It’s that kind of town. A little spooky, but cool.

I happen to know the title of “DSM-IV” refers to the Diagnostic And Statistical Manual of Mental Disorders, which assigns numbers to all manner of mental disorders. So … what’s your favorite number?
James: 292.89. We call it “coke dick.”
Timothy: Which is not, as rumored, the title of the record.

Back to the video posted on MySpace: James, what were you about to say regarding Peter Cetera before the camera cut off?
James: I’d like to say I was about to say something disparaging, but the truth is a good song is a good song, and I’m almost willing to look beyond that unfortunate Karate Kid II shit for “Street Player” alone. Though I’m pretty sure he didn’t actually write that one.
Timothy: James is wrong about “25 Or 6 To 4“ being a good song—and I happen to know that both Clint and Elizabeth are on his side. I wonder at times how the powerful Cetera apparatus got to them. You will notice on that video that James, who does not scare easily, is far too circumspect to actually be caught giving any opinion at all about the man. Cetera has gotten powerful—too powerful. He’s like Vladmir Putin. He’ll put you in those graves by James’ house.

[…] a good talking-up yet, the Murfreesboro, TN based “super group” was interviewed by Magnet Magazine this summer, with Toth and Bracy curating the their online edition shortly after. The Jescos have […]