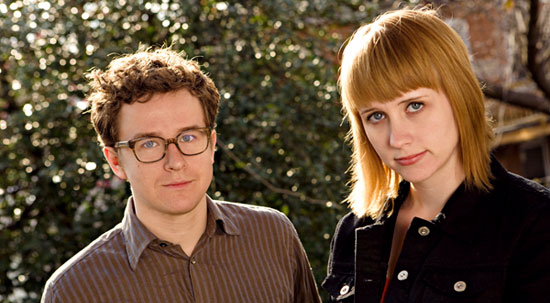 Wye Oak‘s loud/quiet/loud brand of shoegaze Americana on second album The Knot (Merge, due next Tuesday) sounds like mid-period Yo La Tengo and indoor fireworks: by turns subtle, explosive and intimate. The Baltimore duo of Andy Stack and Jenn Wasner aren’t easily pinned down, but The Knot does offer a lyrical theme of personal connection and romantic ties. For her MAGNET mix, Wasner went with a playlist of first songs she heard from artists she loves.

Wye Oak’s “Take It In” from The Knot (download):
https://magnetmagazine.com/audio/TakeItIn.mp3

Dirty Projectors “My Offwhite Flag”
Super addictive and oddly catchy. This would come on regularly at the restaurant where I work and make me forget whatever I was doing at the time.

Extra Golden “Ilando Gima Onge”
This song inspires instant happiness and summery warmth, even though the first time I heard it was in the winter. I recently had the great pleasure of seeing this band live, and they opened with this. They were phenomenal, by the way.

Lambchop “Paperback Bible”
There are hundreds of Lambchop songs I’ve grown to love, but this was the first. We got a copy of Damaged the first time we visited the Merge folks in North Carolina. I put it in and instantly thought, “How have I been missing out on this?”

Smog “Permanent Smile”
Thank goodness for this “first songs” theme; otherwise I could never pick only one.

Royal Trux “I’m Ready”
This song sounds so perfectly terrible. It was all I could listen to for days.

Silver Jews “Frontier Index”
The voice hit me first, but it was the guitar solo that clinched it.

Townes Van Zandt “Pancho And Lefty”
I remember being amazed at how affected I was by two characters whose lives and surroundings couldn’t have had less to do with my life.

Sharon Van Etten “Damn Right”
I had the pleasure of first hearing Sharon live. I work at a restaurant that doubles as a venue, so I’m used to tuning out bands while I scrub away at the last of the evening’s grime. As soon as she started playing this song, I froze—in fact, the whole place did—and I don’t think I spoke a word until she finished. Fortunately for me, it was the first of many times I saw her sing this.

Big Star “O, Dana”
“I’d rather shoot a woman than a man/I worry whether this is my last life.” I’m sold!