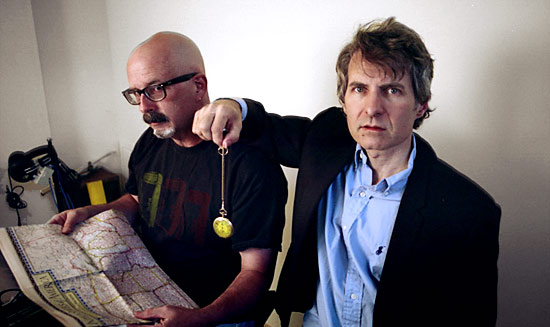 “I guess we won’t try to surf the crowd tonight,” chuckled Peter Holsapple, patting my arm as he circumnavigated the 40 or so paying customers seated in San Francisco’s Cafe du Nord on a foggy Saturday night. The house would eventually swell to more than 60, all there to hear the heroic blend of Holsapple and Chris Stamey, the onetime (and future) creative core of revered North Carolina jangle-rockers the dB’s, play numbers from their current release, Here And Now (Bar None), as well as select gems from their abundant back catalog.

The always simpatico vocal duo enhanced their rich blend by frequently singing into the same mic at center stage, a la the Everly Brothers. Then, at times, they’d scratch a Simon & Garfunkel itch (more like Simon & Simon, actually) on a couple of faintly Latin-flavored tunes, with drummer Gary Greene beating his snare like a conga while Jeff Crawford added solid bass lines.  The best early moments came on “Santa Monica,” a haunting new tune that sounds as though it could have been an outtake from Who’s Next. Supported all night by Holsapple’s lithe acoustic (and something that looked like a fretted cigar box but sounded like a mandolin), the still boyish-looking Stamey dug into his powder-blue electric and made it squirm like Tom Verlaine.

“At one time, we were the only kids in Winston-Salem who didn’t believe the Allman Brothers were the second coming of Jesus,” smirked Holsapple.now sporting a clean-shaven head, horn-rimmed glasses and a Pancho Villa mustache. “We were  young art-rockers who loved the Move, Can and Amon Düül.” To prove his point, they played “My Friend The Sun,” a lovely obscurity from Leicester, England, prog-rockers Family. Wisely, neither singer attempted to replicate the notorious goat-like vibrato of Roger Chapman, Family’s frontman. A collective gasp went up from the crowd when they recognized the ethereal “I Am The Cosmos” by Chris Bell of Big Star, killed in a 1978 car crash at age 27. The song, originally released by Stamey’s Car label earlier that year, reaffirms an important link in the DNA of the dB’s.

Terrific covers aside, it’s the Tarheel twosome’s indelible originals these folks came to hear, and Holsapple and Stamey did not disappoint, with impeccable workouts on “She Was The One” and “Angels” from the duo’s 1991 album, Mavericks. “We were in a pretty famous band at one time, and I know you’re all thinking of Rittenhouse Square,” joked Stamey as the group rolled classic early jangle-punk dB’s single “Black And White” out of the garage. It may have sounded less frantic 30 years later, but it was every bit as much of an arrow right through the heart.

“Here’s a little number to send you home happy,” said a sweat-drenched Holsapple as the boys ended their brief encore with an excruciatingly beautiful version of the Everlys’ “Let It Be Me,” the perfect dessert cognac to a magical evening.

Mavericks recording came out in 1992

According to Jud Cost, who wrote the review, the CD has a copyright date of 1991.

Dear Jay B–someone had written the date 1992 on the Internet. A lot of errors and unverified material on the ‘net. I was wrong, sorry about that.

David, if you looked at a site like Amazon or some other reputable site, you’d have found the correct date. That’s all I was trying to suggest.