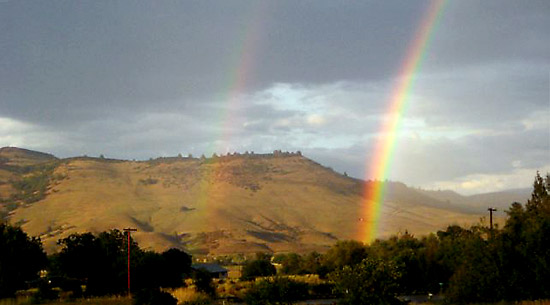 I offered to drive right before sunset, which was timed perfectly with my favorite drive in the whole country: I-5 through Northern California and past Mount Shasta and roads curving over blue lakes. And the second I took over, the sky clouded over to nearly black and sheets of rain hammered down over the car, sounding like a cavalcade of toddlers let loose with wooden spoons over piles of aluminum trays. When the sun finally came out, the sky was golden and two nearly full arcs of rainbows broke out of the air. The air was so lovely and fresh and the scenery was so picturesque I turned into a different version of myself and did the unthinkable: Next time we stopped for gas, I bought a pack of cigarettes. Those 99.9{e5d2c082e45b5ce38ac2ea5f0bdedb3901cc97dfa4ea5e625fd79a7c2dc9f191} of you who are reading this and don’t know me for the last five years or more will probably not be sufficiently shocked at that last part of the sentence. I mean, sure, when I’ve been drinking too much, I bum one off a friend from time to time, maybe about three a year, and this was the second pack of cigarettes I ever bought. And the first one ended up crumbling into a slightly wet pile of tobacco shreds at the bottom of my bag, with only two smoked out of the pack. It’s not like I think buying a pack of cigarettes is actually that weird of a thing to do, or that smoking a random cigarette made by a company that doesn’t test on animals or puts fiberglass in their recipe is really that bad. It’s more that the action is so uncharacteristic of me that I feel like a completely different person, or that I am the same person, with the same brain, and it’s observing the actions of a completely different person doing unusual things with my body. And to top it off, I have a weird guilt complex when I smoke one outside of a venue, because there will be young fans outside, and I don’t want them to get the wrong idea and think that I approve of smoking or that smoking is cool, but maybe I’m just being neurotic about things, which is likely, since being neurotic is pretty much my specialty in life. Not as much as Woody Allen, though. Heather thinks I did it because of a lack of sex, but I think the lack of sleep is getting to me.

“The Way To There (Mark Anthony Tieku Remix)” (download):
https://magnetmagazine.com/audio/TheWayToThereMarkAnthonyTiekuRemix.mp3