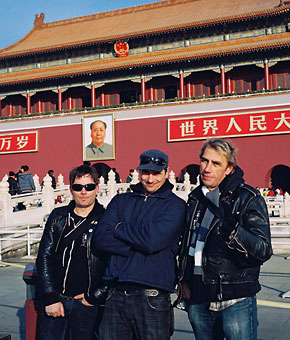 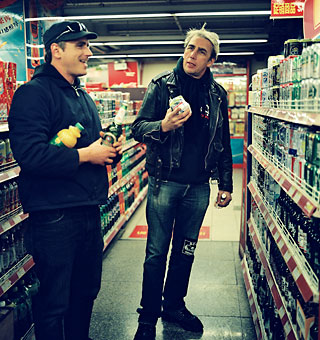 In January 2008, 30 years after forming, D.O.A.—Canada’s original punk rockers and one of the world’s first hardcore groups—made history once again, becoming the first Western-based political-punk band to tour China. All this week, guest editor and D.O.A. frontman Joey “Shithead” Keithley looks back on the historic trip and gives a fascinating and uncensored glimpse into a part of the world most of us will never see.

Day One
I wake up at 7 a.m. in Vancouver to catch the flight to Shanghai. Holy shit! D.O.A.’s going to China. It still hasn’t sunk in. I have been traveling around the world for the last 30 years playing punk rock, I’ve seen a lot, but this promises to be way out there. At the Vancouver airport, I meet D.O.A.’s bassist Dirty Dan Sedan. Our drummer, Floor Tom Jones, is on a different flight, Vancouver to Portland to Tokyo to Shanghai. Well, that should be about 25 hours of travelling—poor sod!

We look at the departures board in the airport. First fuck-up: Our flight is delayed by a couple of hours, there’s a big snow storm in Toronto; that’s where our silver bird is coming from. I got time to kill, so I go to the money exchange to get some RMB (Chinese money). There’s a Chinese lady in front of me, about 40-ish and she is changing in large amounts of Canadian dollars into RMB. As I stare at her cash, she gives me a really deadly look. Maybe it’s drug money. At the airport, you can still change money without ID.

Dan and I get on this brand new Boeing 767, Air Canada Flight 25. The first thing we see is “the pods.” These are the new seats in first class that fold down into a bed. This section is called “Super Elite.” The stewardess is offering champagne; passing by, I say, “Yes please!” She ignores me. Dan and I go, “What the fuck! We’re not part of the super elite!” As we are ushered to the back, it is confirmed we are not.

But at least we are on our way. I pull out my phrase book and my free map of Beijing I got from the Chinese consulate in Vancouver. A couple of days ago when we were at the consulate, I thought we might not be going at all. When I arrived at the consulate, I was gabbing on my cell phone; the Consul-Nazi yelled at me, “Turn that thing off!” I did. A kid was eating a burger, and the Consul-Nazi yelled, “Put that away! What do you think this is, McDonald’s!” He then repeatedly refused to answer any questions from me or others who wanted a visa. Then he told me to line up the next day at 5 a.m. to get the visa.

Day Two
Dan and I land at the Shanghai airport after a 14-hour flight and go to clear immigration. There was a strange thing at the desk of each immigration officer: an electronic device designed for you to register your satisfaction with the job the customs officer did. It had two green buttons with smiley faces you could press and two red buttons with sour faces. I quickly pressed one of the green ones, as I sensed that pressing the first red button meant 10 guys running at you with truncheons and the more severe red button meant the truncheon guys and the rubber-glove squad. But you know what? We are in the country, pretty well the first political punk band to play in China. Woo hoo!

We met up Abe Deyo, the expat American who was promoting the tour. The handy thing was that he spoke fluent Mandarin. We then catch our flight to Beijing. On the flight, I get a copy of the China Daily News, which is the government-run English-language daily. The paper is full of wonderful stories about the economic miracle taking place all over China, There is also a great political cartoon that features Uncle Sam taking a huge crap in a toilet, and the crapper has Guantanamo Bay written on the side of it. We arrive in Beijing, but we can’t find drummer Floor Tom Jones. We try to phone him. We try to page him to no avail. We wait about two hours for him, then decide to catch a cab to the hotel. When we get near the hotel, we can see the hotel sign from the main road, but to actually get to the entrance of “Home Inn,” we turn down this dark, dingy alley. It’s looking grim; it’s about 1 a.m., and we have been traveling now for about 22 hours. We get in the hotel lobby, and it turns out it’s not too bad. It’s the Motel 6 of China. The hotel staff want copies of our passports; obviously the government likes to keep track of where you are. Our rooms are small, but it’s no biggie. We are on the ground floor, and I go to look out our window. There’s a nice little flower bed just outside the window, with a light shining on it; nice touch. As I get closer, I realize that the window is just an opening that is four feet wide, four feet deep and five feet high. It doesn’t go anywhere and the flowers are plastic. So much for the fire-escape option.

We finally get hold of Floor Tom. His flight sat on the tarmac in Tokyo for three hours due to some unknown “mechanical problem.” While we are waiting, we walk around the corner to an all-night diner and order some grub. I guess I don’t have to ask if they have any Chinese food on the menu. Floor Tom eventually catches a cab and gets to the Home Inn at about 3 a.m., after 30 hours of travel.

You are delusional to think you’re the “first political punk band” to play in China. China itself has quite a lot of bands like this, and several foreign punk bands tour China every year.