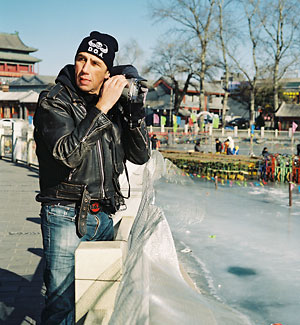 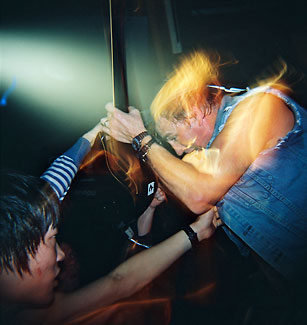 In January 2008, 30 years after forming, D.O.A.—Canada’s original punk rockers and one of the world’s first hardcore groups—made history once again, becoming the first Western-based political-punk band to tour China. All this week, guest editor and D.O.A. frontman Joey “Shithead” Keithley looks back on the historic trip and gives a fascinating and uncensored glimpse into a part of the world most of us will never see.

Day Three
We get up about 9 a.m., no time to waste. D.O.A., “The Men Of Action,” don’t waste time! We must cram in as much culture, sightseeing and D.O.A. events as we can in eight days. We are off to see a magnificent Buddhist temple not far from the hotel. We get a huge bowl of noodles for breakfast. It was delicious, and the best part: two bucks a bowl, good shit! Speaking of good shits, as we walk along toward the temple, I see a sign for a public toilet down an alley/street. I go in to take a leak, and I am a little taken aback. This public bathroom is about six feet by eight feet. As I open the door, there is a guy squatted over the hole in the ground (no bowl, no seat and no divider/cubicle walls). He’s smoking a cigarette, reading the paper and producing one of the worst stenches I have ever smelled in my life! But hey, I am not the squeamish type, so I walk in and use the urinal. The guy taking the crap is about two feet from my butt. Tour promoter Abe (Deyo) told us two really useful things to remember about China. First, there is no queuing or lining up for things; it’s almost always a mad scramble to get what you need. Secondly, in China there is no sense of personal space. I guess I had just found that out.

The other truism about China, which we quickly figured out for ourselves, is that you take your life into your own hands every time you cross a street. The drivers were ruthless and would pretty well brush by your hip if there was a slight opening to keep moving their stinking cars. I stopped and stood right in front of a few cars that had almost hit me and gave them the bird.

We carry on to the temple. It’s incredible. We spin the big metal balls, which will give you good luck, but in the process, we make more noise than the other 100 people in there put together. We exit before we get kicked out; I’ve heard some of these monks are pretty tough. We set out on a walkabout around Beijing. It’s really, really cold, and the sky is really blue except for the perpetual smog, so Beijingers are out skating on this little frozen lake. They are also riding these crazy ice bicycles, pulling kids behind them. The locals are also pushing themselves around mechanical ice ducks, goats and birds. They are having a time, indeed. Then we run across the club of ice swimmers; they have smashed a hole in the ice close to the shore that goes out about 50 feet into the lake, then guys of all ages take their turn jumping in this chilly pond and swimming 50 feet and back. Abe asks me if I am game for this. I reply that normally I would, but it’s not much of a challenge. As a Canadian, I would think nothing of  swimming across Lake Superior  in January. We head up to Drum Tower, just north of the Forbidden City. It’s about 200 feet high, ancient and incredible. It has 10 massive drums at the top of tower, about six to eight feet in diameter, that they used to use to let people know what time it was. They also used to use it as a warning system should there be a gang of bandits or an army making their way to Beijing.

At about 6 p.m., we head down to the Mao live House, where the first show will be. The equipment is good, and everything works. We have only brought one guitar, one bass, some drumsticks and the kick-drum pedal, so we are at the mercy of whatever gear is supplied. The opening band is Demerit, pretty cool, like a cross between D.O.A. and Iron Maiden. They’re young guys with mohawks and spiky hair and jackets that look like they’ve been stolen from the Exploited. The next band is the Subs; they have a woman singing, they are very sharp, with an airy sound, kind of like Siouxsie & The Banshees. The audience is a real mix, 15 to 45 years old, about 400 in total. There are a few expats who know D.O.A.’s songs, but they are in the minority. Most people don’t know the songs, so it was like going back to when we started: You have to win people over with sheer power and charisma. Hey, we’re D.O.A.! So we did well on both counts. Of course, my usual activist/humor rapport between songs is understood by very few, so I minimize that and use all the Howlin’ Wolf riffs I have stolen over the years to fill in, as drummer Floor Tom Jones and bassist Dan Sedan periodically resuscitate themselves with beer. After the show, the bar won’t give us any beer, so an American steps up to the plate and buys us all a Bud. Shit. I’m in China, and I get a Bud! Oh well, it was free …

We get back to the hotel and turn on the TV. Abe has warned us there is nothing controversial on Chinese TV, mostly period pieces from China’s ancient past and the news. The news involved events happening around the world and a lot of coverage of People’s Party Congress at the Communist Party headquarters; boy, they all clapped a lot at the speeches given there—must have been profound stuff. I suppose you would go to re-education if you didn’t clap. There were no channels in English, so everything was a little hard to follow. We concluded it was 57 channels of “What the fuck did he just say?” Although the Three Stooges seemed to work pretty well in Mandarin.