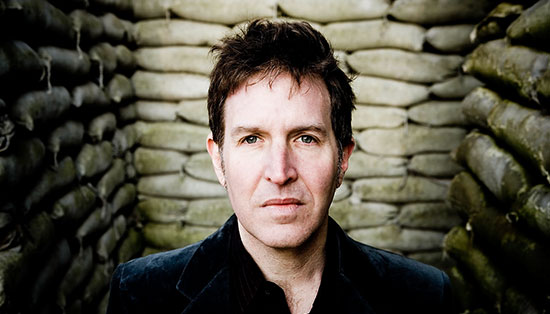 Fifteen years after he scratched a lifelong itch and moved to New York City, Steve Wynn has settled in nicely to life on Manhattan’s Upper West Side. As he probably suspected it would, the relocation also breathed fire into a music career that already had notched landmark albums by his first band, the Dream Syndicate, meaty collaborations with Gutterball and a slew of excellent early solo releases. Once he turned 40, Wynn rolled up his sleeves and really went to work, cranking out masterpieces like 2001’s Here Come The Miracles and 2003’s Static Transmission. His most recent solo release, cut in ’08 with Chris Eckman in Slovenia, is Crossing Dragon Bridge, a moody, intoxicating gem not to be missed. Wynn has done pretty well recently on the home front, as well, marrying longtime girlfriend (and excellent drummer with his Miracle 3) Linda Pitmon last summer. Wynn, Pitmon, Scott McCaughey and Peter Buck are set to begin a U.S. tour for their 2008 joint venture, the debut by the Baseball Project, Frozen Ropes & Dying Quails, and the new one by McCaughey’s Minus 5, Killingsworth. (Read our 2001 Q&A with Wynn, conducted by novelist George Pelecanos, as well as our overview of the Dream Syndicate and its fellow Paisley Underground bands.)

MAGNET: I know it’s been a while since we’ve done this because you’ve gotten hitched since our last interview.
Wynn: I’m not even technically a newlywed anymore. We’ve been together for 15 years. It’s great; I love being married. I’ll be touring the U.S. for the first time with my wife. Every road experience in the U.S. will be different now. Old routines will be brand new. I don’t think I’ve ever been in a Waffle House with my wife before. I’ll be able to say that’s my first miniature golf in Iowa with my wife.

How do you feel about New York, 15 years after the move from L.A.?
I still love it. You know the term Anglophile. I’ve never known what the New York equivalent of that is, but that’s always been me. I’ve always had that love and fascination for New York since the first time I came here when I was 21. New York had my favorite music, my favorite writers, my favorite filmmakers, everything about walking the streets around here. I always felt very at home here. Everytime we played here on tour and we’d come through the Lincoln Tunnel, that first second of being in Midtown was like an adrenaline rush. And leaving would always give me the blues.

That’s exactly how I feel about London, so charged up on the bus into town and totally bummed out for the flight home, wondering if I’ll ever get back.
I was dying to live here. If nothing else, I’ve written so much more since I’ve been living here and, I think, much better stuff. I’ve made my best records sine I’ve lived here.

I saw a great New York movie last night: the original Taking Of Pelham One Two Three, with the two top transit cops being Walter Matthau and Jerry Stiller. Can you picture George Costanza’s dad as a police bigshot? He was good, too.
Yeah, that was great. I’m a little afraid to see the new one. It’s always fun to see a thriller/disaster movie about your own city. A few years after I moved here, I saw something called Volcano, about a giant earthquake in L.A. that swallowed up the whole city. It was a real thrill ride to be here in Times Square watching this terrible movie about my hometown.

What are your favorite New York movies, or New Jersey movies to stretch the point?
Off the top of my head, all the Scorseses: Mean Streets, then Manhattan, of course. One of my favorite New York movies, not necessarily the best one, is After Hours. First of all, it’s such an interesting look at how New York and Soho was in the ’70s, before I lived here. But it’s also very perplexing because the whole movie hinges on the fact he can’t get home—and all he has to do is walk! When I first moved here, I made the walk he wouldn’t make, from the East Village to the Upper West Side, all eight miles, a little bit drunk, but I’d make that walk every single night, because I could. People ask me what I like best about New York, and it’s three words: “walking, not driving.”

And then there’s the live music scene. I’ve never been disappointed.
Went out last night and saw Wreckless Eric and Amy Rigby play a free concert at the Lakeside Lounge, walked a couple of blocks and ate some weird Australian meat pie I’d never had before and then caught a cab home—things I would never do in L.A. And I’m not an L.A. basher. I still love it out there, but I gotta say, I prefer living here. Getting lost here is the most fun thing, walking down some street you’ve never been down before and seeing what happens. Randomness, that makes it inspiring. San Francisco has a bit of that, and London, too, but in L.A., you are generally going from point A to point B. You have it figured out ahead of time, and you kinda know what you’re gonna get. Everytime I go back there to see the family, there’s still that great rush of driving on the freeways at two in the morning. I love that. That’s something I do miss. We just played at the Echo in Silver Lake, and I took my poor band about an hour out of their way, because I had to go to this one particular burrito stand in North Hollywood, driving down Lankershim Boulevard for an hour. San Francisco used to have a great hamburger place, Clown Alley. I used to go to the one in North Beach after every punk-rock show I saw. Is it still around?

Nope, lone gone. They should have made it a historical monument, that one and Doggie Diner out by the zoo. All torn down.
I have to say, one thing I miss most about L.A. is San Francisco. It used to be so easy to drive up there and spend the weekend. I once spent six months there making one record, (the Dream Syndicate’s) Medicine Show, with Sandy Pearlman as producer. I’m gonna write a book about those six months some day. That was the lowest, most degraded, freaked-out I’ve ever been in my life, but it was also very interesting and would make a good story. I think I knew what time every liquor store in the city closed. I knew exactly where I had to go at 1:59. I knew the guy behind the counter at Terminal Liquors and how much he’d let me slide past two o’clock, things like that you really shouldn’t know.

I’m really looking forward to you, Linda (Pitmon), Scott (McCaughey) and Peter (Buck) playing (San Francisco’s) Great American Music Hall on August 30. You guys are doing Steve Wynn, Minus 5, Baseball Project and Dream Syndicate stuff. How’s that going to work?
It’ll be three different sets of songs, but I don’t think we even know yet how we’re gonna mix it up. I think we’ve all agreed that it’ll be two sets with an intermission. It’ll be some acoustic, some things off the menu, but different each night. I can’t remember ever working this hard before a tour, learning all this stuff. It’s quite a repertoire, the four of us playing everything, with costume changes, I hope. [Laughs]

Yeah, you should get the old Peter Gabriel/Genesis stuff out of the trunk: the fox, the flower, stuff like that.
I think the plan is to have no opening act so we can play as long as we want. It’s going to be a lot of fun. It reminds me of the tours I used to do with Gutterball, which were my favorite tours ever. We had my thing and House Of Freaks and Gutterball and Stephen McCarthy. We used to play four hours. It keeps it moving. Bob Dylan and Tom Petty did that when they toured together.

Tell me about going to Slovenia to record Crossing Dragon Bridge with Chris Eckman of the Walkabouts, one of my favorite people.
I’ve wanted to work with Chris for years. I’ve known his records and was a big fan. But even though we led parallel lives, we didn’t really know each other. Same kind of European career with the same crew members, but we never hung out. We’ve been sending emails to each other for 10 years that we had to make a record together. It took us that long to find a time to do it in Ljubljana, where he lives. I’ve always been a fan of recording away from where I live, whether it’s Tucson or Boston or San Francisco. I just like the random element, nothing too comfortable, playing with people who have their own thing going. Maybe I like being Zelig and falling into their thing. I get more inspired by that, being a tourist, than going down to my local. It gives me new ideas. It turned out great. He has a studio in his house.

Did you have second thoughts before you arrived?
It was funny. On the plane, on the way over, I was thinking, “What am I doing? I’m traveling all the way over here with three weeks booked in a hotel in a city I barely know, with a person I barely know. What if there’s nothing going on here? This could be a really expensive and boring vacation.” But we hit it off right away. It was a new experience for me. I’d never made a record without a band. This was just the two of us in a laboratory setting, where I’d bring in a song that I’d just written. And we’d figure out a completely different way to approach that song than the one we’d done the day before. That was really exciting. I toured that record in Europe with a six-piece band with strings. I haven’t done any touring with it over here yet, so this will be the closest I’ve come.

So, what’s next? I’m sure you have something up your sleeve.
Well, we have a week booked in Portland, Ore., to do the second Baseball Project album. Those songs kind of write themselves. Usually when you do a record, it’s, “Where am I at right now in my mind?” But with the Baseball Project, your subject matter is baseball. I’ve been joking that my preparation for the record is to watch baseball games. I get to spend the whole evening watching the Yankees and call it research. As for the band, we’ve only played together twice, one song on Letterman and three songs at our wedding. That’s it. We’re playing in Spain to start the tour, but Peter can’t go, so Mike Mills is pinch-hitting.

Would you have ever believed back in your days at UC Davis you’d still be doing this 30 years later?
Things have worked out nicely. Man, I was just hoping they’d keep my job at Rhino Records open for me. Which they didn’t. [Laughs]