The multimedia Songs About Time is an ongoing project from the Rentals, the revolving-door band founded 15 years ago by then Weezer bassist Matt Sharp. Songs About Time finds Sharp and Co. collaborating with a cast of about 50 filmmakers, designers, producers, editors and artists. They began this year-long experiment January 1 and have since made a new black-and-white film every week, not to mention documenting the process with a daily photo diary and recording three mini-albums. (All of this content can be found on the band’s website.) As if Sharp wasn’t busy enough, he is also guest editing magnetmagazine.com all week. Read his introduction. 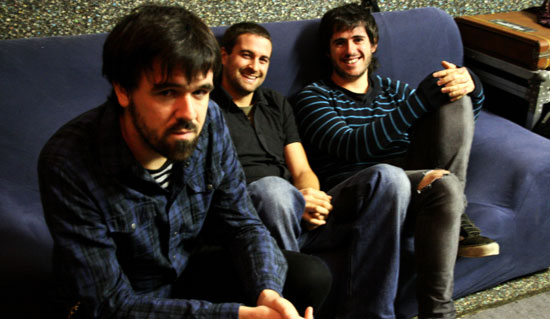 Sharp: Berri Txarrak is a great band from the Basque Country. Toward the end of 2008, they asked if I would be interested in playing bass on their next album. They sent me a copy their last album, Jaio.Musika.Hil, and a documentary they made called Zertarako Amestu (“Why Dream?”), an atmospheric, black-and-white film that follows the creative process of Berri Txarrak over the course of 25 months. I loved the mood that the voice-over narration set and the ambient tone of this film. After watching it the first time, all I could think about was how cool it would have been if they would have released the film, more or less, in real time in short five-minute segments. Zertarako Amestu triggered a lot of good thoughts and ultimately had a big influence on how we approached the film aspect of Songs About Time. Berri Txarrak’s new album, Payola, was recorded by Steve Albini and is out this week. Video after the jump.