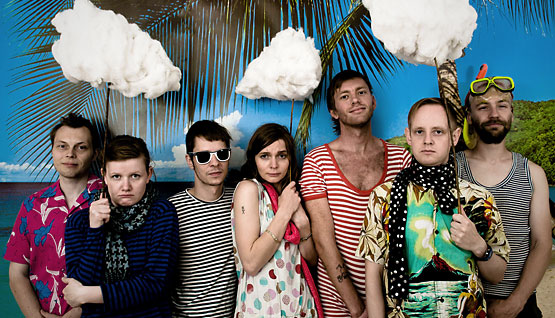 Icelandic outfit Múm has been controlling moods with its feathery, epic dream-pop for a decade, so it’s no surprise that founding member Örvar Þóreyjarson Smárason left MAGNET instructions on when to post his mix tape: “A late-summer or early-autumn mid-morning—not too early,” he wrote. Sing Along To Songs You Don’t Know (Morr), Múm’s fifth full-length, is out this week.

The Velvet Underground “Sweet Jane” (full-length version)
The intro is the most sun-drenched 15-second piece of music I have ever heard. I want to just loop these seconds and glue them to my ears forever. Too much? Probably not. Watch the video.

Sin Fang Bous “Advent In Ives Garden”
A jumpy and colorful track by Sindri from the band Seabear. He’s coming on tour with us in the U.S. Watch the video.

Billy Idol “Don’t Need A Gun (Meltdown Mix)”
I went into a secondhand record store in Reykjavik looking for something fun. After searching the back room for about half a minute, I had found three Billy Idol 12-inch records, and they all had some crazy remixes on them. It was like winning the lottery.

Can “Turtles Have Short Legs”
This is such a spot-on zoologic observation that it is hard to believe it comes from the mouth of Damo Suzuki. But it could possibly be the spirit of Charles Darwin singing through him, asking for a cigarette.

X-Ray Spex “Warrior In Woolworths”
We need rebels in retail stores. This track will indeed keep on inspiring people, even if Woolworth’s has been liquidated. Watch the video.

Bird Names “The Tailors’ Revolt”
I really like this band. One of my favorites. And these are really really good “la la”s.

Tonistics “Dimona (The Spiritual Capital Of The World)”
In the early ’70s, Dimona became the hometown for the black Hebrew community in Israel (emigrating from the U.S. and Africa) and a melting pot of soul, jazz, funk and black Hebrew culture with undercurrents of psychedelia. So, when this track was recorded, Dimona may well have been the spiritual capital of the world. Today it is more famous for being at the heart of the Israeli nuclear program.

Retro Stefson “Medallion”
“Retro Stefson are the pop in your popcorn and the smooth in your smoothie.” If that’s what they say, I will agree. Young Icelandic band with a mischievous delinquent streak. Watch the video.

Takeshi Terauchi & His Blue Jeans “Tsugaru Jongara Bushi”
This is the maddest style of guitar picking I have ever heard. Takeshi Terauchi was a free spirit in the Japanese “Eleki” movement, and this song is a rearranged traditional Japanese melody. It is insane in the best way possible. Watch the video.