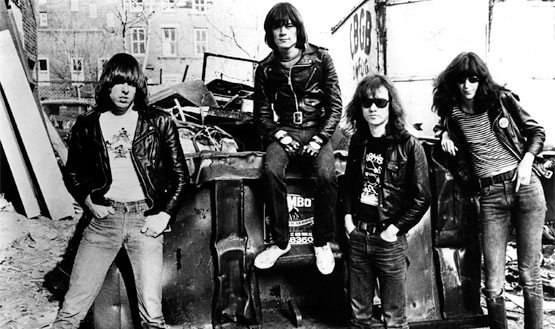 The Ramones hold such a vested place in pop history that to reduce them to overrated and underrated seems like a silly endeavor. But what the hell, that’s never stopped us before. Spanning more than 20 years and 14 studio albums, the Ramones have spurred heated debate since day one and influenced, well, pretty much everybody. As wonderfully demonstrated in 2003 documentary End Of The Century, the Ramones should have always been the biggest band on the planet—and somehow they never were. Here are the five most overrated and the five most underrated releases by Dee Dee, Joey, Johnny, Marky and Tommy.

:: The Five Most Overrated Ramones Songs
1. “We’re A Happy Family” (1977)
There are a lot of absolutely brilliant tracks off of Rocket To Russia that I genuinely can’t criticize, no matter how often they’ve been played: “Do You Wanna Dance,” “Sheena Is A Punk Rocker,” “Rockaway Beach.” They’re just further proof that the Ramones, along with Chuck Berry, are a key exception to a very valid rule: No rock artist is allowed to write a song with the word “rock” in the title. But “We’re A Happy Family,” complete with cheese-heavy spoken fadeout, is one of Rocket To Russia’s weakest numbers. How it became so beloved is anyone’s guess.

3. “Rock ‘N’ Roll High School” (1980)
It’s not really fair to talk about the Ramones getting “overexposed.” (After all, 1988 compilation Ramones Mania is the band’s only album to be certified gold.) But End Of The Century‘s “Rock ’N’ Roll High School” is really just awful; it steals the beat from “Rockaway Beach,” tries to steal its title and doesn’t come away with any of the fun. The titular film is pretty terrible; there’s a reason that the Ramones weren’t known for their crossover potential. (See also Dee Dee’s rap career.) Sure the Ramones—or rather Joey—loved surf music and did it well on occasion (even “Surfin’ Bird” has its charms), but “Rock ’N’ Roll High School” is one of their better-known tracks that should have stayed underground.

4. “I Wanna Be Sedated” (1978)
I stand by keeping most of the stereotypical “overplayed” Ramones tracks off of this list, songs like “Blitzkrieg Bop,” “Judy Is A Punk” and “Sheena Is A Punk Rocker.” But “I Wanna Be Sedated”? Yes, the beat is still great. Yes, it’s still a sneering little mess. But it’s been beyond overplayed, beyond overexposed, so every drop of punk-rock nastiness has been thoroughly sanitized out of it. Call me crazy, but I was never particularly fond of the Ramones’ numbers lamenting life on the road, and “I Wanna Be Sedated” is the best-known of the bunch.

5. “Pinhead” (1977)
Gabba gabba hey! It spawned a catchphrase, launched an empire (if a fairly small one), and “Pinhead” still doesn’t hold anyone’s attention 32 years later. Leave Home is actually one of the weaker albums from the Ramones’ early career, despite some winning moments. The Ramones were a one-trick pony, one joke told over and over with different trimmings, and that never seemed like something to criticize before. So why does “Pinhead” feel so redundant?

:: The Five Most Underrated Ramones Songs
1. “Listen To My Heart” (1976)
First off, it must be said, I simply cannot put “Blitzkrieg Bop” on this list. I know, it’s been done to death—it’s pop for pre-schoolers at this point—but it’s still so damn good. It still sounds like everything you ever wanted punk to be. Is it the best punk track ever written? Possibly. That’s a debate I don’t really want to start, but even the cool kids have to admit that “Blitzkrieg Bop” is still pretty damn brilliant. Then again, Ramones has countless great tracks, from rent-boy saga “53rd & 3rd” to the snotty “Beat On The Brat” to the equally underrated “I Wanna Be Your Boyfriend.” And then there’s the superb “Listen To My Heart,” which doesn’t have many lyrics to speak of, doesn’t do much musically and has a beat that even a hearing-impaired hamster could drum along to. In other words, fantastic.

3. All of Pleasant Dreams (1981)
Along with End Of The Century, Pleasant Dreams never seems to get the fair treatment it deserves. It’s admittedly a little slick, a little over-produced and certainly not the best album the boys ever produced. But with a hit-heavy number like “The KKK Took My Baby Away,” it doesn’t really seem right to quibble. Allegedly Joey’s rebuttal to Johnny’s seduction of Joey’s former flame Linda (there’s as many twists here as a soap opera), “KKK” proves that Joey was often as good a songwriter as he was a guitarist. And we mean that as a compliment.

“The KKK Took My Baby Away”:

5. “Questioningly” (1978)
The band’s fourth album, Road To Ruin might have had its ups and downs, but “Questioningly” was unquestionably one of its highlights. It’s a country-tinged ballad, and if that doesn’t sound like typical Ramones territory, well, it’s not. But it’s nearly perfect, with a vocal performance that could jerk a tear out of the grimiest punk fan. The Ramones did punk well, possibly better than anyone else, but that doesn’t mean they couldn’t broaden their horizons just a little bit.

16 replies on “The Over/Under: The Ramones”

I Wanna Be Sedated is pure punk/pop magic. I don’t think there is one false note on any of the four albums they made in the 70’s. After that it gets dicey, but those first 4 lps made rock n’ roll fun again. How can you overrate that?

bonzo goes to bitburg is their most underrated track. not an opinion but a fact.

RIP Ramones. I know they’ve rolled over in their respective graves with this idiot girl drivel substituting as informed critical opinion. I guess kids these days don’t know shit. At least the writer doesn’t.

ROAD TO RUIN IS SIMPLY AN AMAZING SLAB OF VINYL GLORY! THE TREND I’M SEEING WITH THIS, IS MAGNET BECOMING THE OVER RATED AND THE SIMPLE LOVE OF GOOD MUSIC BECOMING THE UNDER RATED. DON’T BE MUSIC NAZIS! THAT’S SHERIDAN’S JOB

I agree that “Happy Family” was never that great, but the Black Sabbath-esque breakdown in “Now I Wanna Sniff Some Glue” is still amazing. 1-2-3-4-5-6-7-8… I do agree that “Rock N’ Roll High School” is basically “Sheena” with different lyrics, I think that’s well documented, but I’d take the soundtrack version over the End of the Century version. II also agree that Pleasant Dreams is probably their most underrated record. I think that was them at their Pop best, something that they tried unsuccessfully with Phil Spector to achieve.

But Subterranean Jungle? SHENANIGANS!!!! That record, besides the one highlight of “Psycotherapy” is the nadir of bad 80’s Ramones. Give me bad 80’s metal Halfway to Sanity Ramones. SJ has THREE covers on it, somehow the Chamber Brothers version of “Time Has Come Today” rocks harder. That record almost broke up the band it was so bad. Luckily, saved by Too Tough to Die the following year.

Meanwhile, the assertion that rock bands should never be allowed to write a song with the word “rock” in the title is easily the dumbest rock-crit theory I’ve ever heard.

“That record almost broke up the band it was so bad. Luckily, saved by Too Tough to Die the following year.”

This is neither one or the other, OVER or UNDER, it’s just awesome, WART HOG on Too Tough To Die. Good, smashing punk rock that blows your head off and leaves a smoking stump. And for something completely differerent, SOMEBODY PUT SOMETHING IN MY DRINK from Animal Boy is pretty cool.

With regards to “I Wanna Be Sedated”…. how does being overplayed sanitize a song? Is there a formula, where each play depletes the song’s value slightly? Geez, I guess All Along the Watchtower, I Can See For Miles, et. all, must be terrible tracks, since their number of listens must have rendered them irrelevant. Hey, I’m sick of lots of great songs, but I don’t for a second equate my over saturation with being true judgement of a song’s quality. Does Magnet seriously not have ANY music journalists to pen this section of the website?? The last half a dozen or so posts have been real pantloads.

You forgot in the underated list You Should Never Have Opened That Door, I Don’t Wanna Go Down To The Basement & Why Is It Always This Way.
3 of their best in a catalog of great songs.

“How it became so beloved is anyone’s guess.” Aren’t you as the writer supposed to find this type of thing out? Doing something like rating the entire career of an acknowledged artist of influence implies some sort of authoritative foundation. This piece comes off as nothing but platitudes from a casual, or, worse, first-time listener. Once again, Emily crams a lifetime worth of listening into one night-before-the-deadline make-up session. Magnet should license these pieces out to some small-town college newspapers because that is the level of writing.

Spot on with “Questioningly” being underrated. Always stood out as a great and daringly different track to me too. GREAT Joey Vocal….I so believe him on it. One more for the underrated list….”I Wanted Everything”. You can’t get much more punk than “There’s money at the supermarket…..and I’m goin after it!”

I just noticed that the Green Day over/under got three times more comments posted than The Ramones did. That says something pretty scary about your readership…..

Oh Emily! How could you forget to mention Bonzo? I agree with you on the five most overrated songs, but when it came to the underrated songs you got in way over your head trying to limit it to five. There is so many underrated Ramones songs. Good try though. 🙂

Green Day should send royalty checks to the heirs of the Ramones.

Leave Home is actually one of the weaker albums from the Ramones’ early career? This write is uninformed, an idiot, or both.