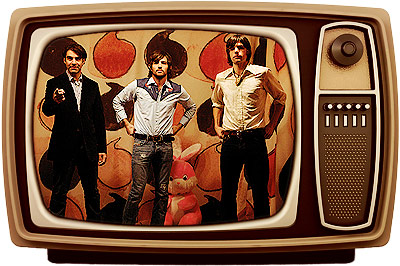 The Late Show With David Letterman (CBS): Kiss
Kiss will be performing on Letterman tonight in support of its new Walmart-only three-disc release Sonic Boom. The set features “Kiss Klassics,” a greatest-hits CD and a DVD shot live in Buenos Aires on the band’s 2009 tour.

The Tonight Show With Conan O’Brien (NBC): Anvil
Conan will host these Canadian metalheads tonight. Anvil! The Story Of Anvil, the highly esteemed documentary on the band’s last-ditch effort to reestablish its fame, has been released on DVD today. The band will perform ’80s classic “Metal On Metal” perhaps in honor of its successful start.

The Late Show With Craig Ferguson (CBS): The Avett Brothers
The Avetts will be promoting new LP I And Love And You, and the trio will most likely play the title track. The Avetts will kick off their U.S. tour in a matter of weeks.

The Colbert Report (Comedy Central): The Mountain Goats
The Mountain Goats are promoting The Life Of The World To Come. Led by former psychiatric nurse John Darnielle, the Goats consistently deliver an experimental sound with interesting insight through a series of connected songs. The new album features a series of 12 tracks named after bible passages and set in some quite solemn situations.