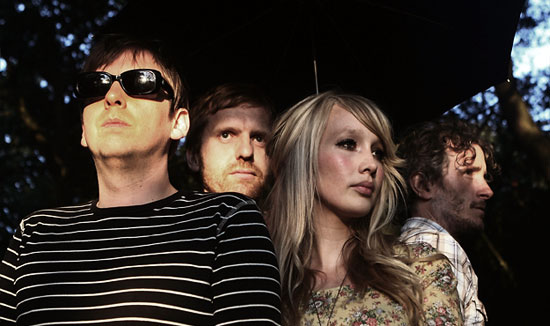 With fourth album Bonfires On The Heath (out this week on Merge), the Clientele resumes its mastery of rainy-day reverb and retro-’60s pop. Allowing us a glimpse of the band’s collective listening history, frontman Alasdair MacLean made MAGNET a mix tape of favorite songs: from spiritual to plain trippy, from the sunny West Coast to his foggy native England.

Jonathan King “Everyone’s Gone To The Moon”
Jonathan King never managed it again, but this first single from 1965 is pretty much perfect: the desolate, reverberating string section, the creepy lyrics picturing an empty world, framed by the odd fetishistic little images of spoons, churches, hands full of money.

Keith West “On A Saturday”
A restless summer’s day of a song, with just a hint of lysergic edginess curling ’round the corners of the words, a coming up into … sunlight, grace, nerves, confusion. And it’s Saturday!

The West Coast Pop Art Experimental Band “As The World Rises And Falls“
People tend to dwell on the bizarre circumstances that brought this band together: three kids and a 30-something Beverly Hills lawyer, working each other for mutual gain. What’s more interesting is how timeless and mythic some of their songs are: foxes, owls, a boy by the sea staring at a girl. And then, as usual, some ambiguously sinister stuff goes down. Topanga Canyon folklore from an era that has since vanished like a ship hit by torpedos.

Half Japanese “Roman Candles”
This is beautiful in an old-fashioned way, delivered almost like a sermon. The simple and great images in the lyric just go round and round. In an era less forgiving of eccentrics, Jad Fair would have been forced to become a professional songwriter rather than a performer and would be as rich as Neil Diamond.

The Everly Brothers “Kentucky”
My second old-fashioned choice. I find “Kentucky” very haunting for odd reasons, above and beyond the hair-raising performance. Probably no one reading this believes that God will come searching for them when they’re ready to die, which is partly what Phil and Don sing about here. It’s about home, too, I guess, but equally, home in this song is something bigger than we can imagine now.

Arvo Pärt “Spiegel Im Spiegel”
Believe it or not, I used to go running and listen to this on my iPod. I didn’t win too many races. The title means “mirror in mirror,” which gives a good indication of its through-the-looking-glass ambience, 6/8 timing, gentle pianos and a violin that just aches.

Trees “The Garden Of Jane Delawney”
Like Fairport Convention, yeah, but Trees had this weird otherworldly sound, and it wasn’t achieved by studio tricks or obvious attempts to write spooky songs. It’s just there in their music, almost as if by accident. They made two LPs in the late ’60s that were not appreciated by their contemporaries, but they now have a place in the acid-folk pantheon alongside Linda Perhacs, Vashti Bunyan, et al.

The Chills “House With 100 Rooms”
The Chills are arguably the most sophisticated of that incredible crop of ’80s New Zealand bands on the Flying Nun label. This is my favourite song of theirs, ebbing and flowing, full of tension and atmosphere.

Neil Young “Helpless”
I’m not a particularly big Neil Young fan, but sometimes, someone will—in a very simple and direct way—sing something that absolutely opens your heart, and you feel as if you’re laying down a burden. To me, this is one of those songs.

Brighter “Christmas”
This is just gorgeous and so, so British. The voice and guitars bring me into dreams of winter garden centres, cold evenings, boredom that is somehow both mysterious and profound. It’s like coming home to the English suburbs at their most magical.

One reply on “The Clientele Makes MAGNET A Mix Tape”

This things (… makes MAGNET a mixtape) are fun. They’d be even funner if we could download the mixes.