You probably know drummer Patrick Carney as half of the Black Keys, the acclaimed Akron, Ohio, duo he formed in 2001 with guitarist/vocalist Dan Auerbach. But Carney has been equally prolific with his own ventures, including Audio Eagle (his record label and recording studio) and now Drummer (a band featuring four other Ohio skinsmen that just released Feel Good Together). Carney, the nephew of multi-instrumentalist Ralph Carney (Tom Waits, They Might Be Giants), always seems to have a lot going on, including Blakroc (a Black Keys project with rappers such as Jim Jones, Mos Def, Q-Tip, RZA and Ludacris with an album due next month) and a Black Keys New Year’s Eve show in Chicago. Carney will also be guest editing magnetmagazine.com this week. Read our Q&A with him. 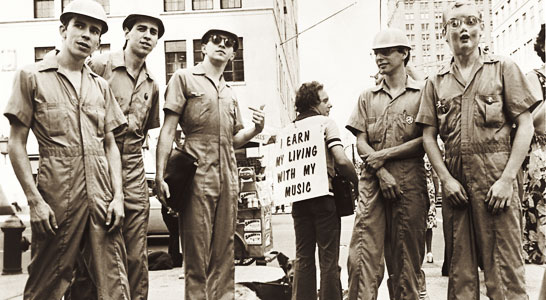 Carney: Devo is my favorite band. Not because they’re from Akron (though that was why I came to them so naturally and so early in life) but because they were the first band that actually spoke to me, and probably the only band that I can recall ever having much of an influence on my worldview and personality. Thanks to Devo, I didn’t take shit from anybody in high school, and I learned how to win by confusing the enemy, not fighting him. They’re also the best live band I’ve ever seen, even now. In fact, I think they’re the best they’ve ever been. Video after the jump.

One reply on “Give Patrick Carney Some: Devo”

hahaha i completely agree about Devo. Duty Now For The Future!