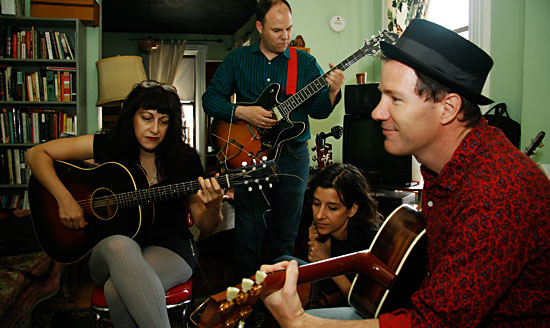 Rick Moody’s name will be familiar to anyone who keeps current with American writing. He’s the recipient of several awards and fellowships, including the Pushcart Prize, a Guggenheim fellowship and the PEN/Martha Albrand Award for the Art of the Memoir. (Never let it be said we don’t keep classy company.) His lauded 1994 novel The Ice Storm was filmed by director Ang Lee; in a roundabout way, we therefore have Moody to thank for Katie Holmes’ big-screen debut. But Moody is hanging around the MAGNET shop this week mostly because of his side job as one-quarter of the Wingdale Community Singers, a remarkable collection of writers, musicians and artists of varying stripe. Once pegged as an “urban folk” group that wrote old-timey songs about modern topics such as cross-dressers and funky Brooklyn culture, the Wingdales just released their second album, Spirit Duplicator, on the Scarlet Shame label. It’s an eerie, jazzy, Tin Pan Alley-inflected collection of songs that revisit the band’s urban roots, but it branches out into the America that Walt Whitman dreamed of, where the sheer size and diversity of our character makes the land a sort of poem all its own. In addition to his writing and recording projects, Moody is guest editing magnetmagazine.com this week.

MAGNET: You’ve been asked a lot in the press about your own role in Wingdale Community Singers, but I’d like to start by asking about everyone else in the band. Your writing process has always been collaborative, but what’s your sense of what the other players bring to the project? It seems like a formidable group.
Moody: That’s right. It’s a deep bench. Even though I’ve written a lot of the lyrics, everybody in the band has these very disparate strengths they bring to that part of the process. Hannah (Marcus) and Nina (Katchadourian), for example, write great lyrics. Even on the stuff I write, everyone else acts as an editorial presence. They’ve saved me a lot of times from some really egregious mistakes, which has raised the level of the songs generally; I think I don’t make a lot of the same gaffes I used to. And David (Grubbs), I’m sure you know his stuff already. He’s a fantastic player, and he was the real studio whiz on the record—those places where you hear those terrific piano lines? Those are David’s. Hannah’s remarkably talented, too, and she’s got some real compositional chops. She’s a third-generation composer, you know. The songs on this record have some tricky chordings and progressions, and she can put together charts and all that kind of business. Glenn Morrow, the owner of Bar/None Records, once told me she was the most talented artist on the label. The level of musicality between Hannah and Dave is incredible. It leads to some interesting moments. There was one time, we were all rehearsing together, and we get to a change in the song, and Hannah says to Dave, “No, C major 7th!” And Dave says, “That is a C major 7th.” And Hannah says, “No, that’s a C dominant 7th!” Yeah, it’s that sort of thing.

For Spirit Duplicator, the three of you were joined by Nina, who’s a conceptual artist, right?
Right. Nina’s a visual artist, but she’s also a self-taught polyinstrumentalist. And she’s an excellent harmony singer, which was actually the reason we’d approached her. It was sort of back and forth for a while. I’d met Nina through (artist) Christine Hill, who was a mutual friend. And Nina had created this conceptual project that was all centered around Staten Island. Anyway, she’d made an album of music to go along with that project—it was this unusual record filled with songs about Staten Island. She sent that to me, and I liked it a lot. The Wingdales had wanted to try some four-part harmony things. We wanted to approach her about singing harmonies with us, and at first we were a little worried about subjecting her to the triune. But in the end we just threw Nina to the wolves, and it’s worked out great. She played recorder, accordion, and lots of other things in addition to singing on the record.

In all the press I’ve seen—and even here, a little—you’re very quick to downplay your own musical talent, but this record seems to have upped the level of musical skill quite a bit. Do you still feel like you’re making your bones in the Wingdales?
Well, I’m not a person who’s been playing my whole life. Probably I am a tiny bit self-conscious. The bands that I played in when I was young were punk, so I was used to that loud, fast, sloppy aesthetic. The other people in the Wingdales are much more practiced at it than I am. The way I always thought of it is, I’m a player the way Kelley Deal was a player in the Breeders. I learn my part, and I practice the shit out of it, and eventually I can play that. Mercifully, the Wingdales don’t jam too often. But we’ve been playing together long enough now that there’s chemistry among us. So I guess it’s easy for me to be self-deprecating; it feels natural. But it would also be dissembling if I didn’t say that, despite our lack of touring and promoting capabilities, we’re not at all embarrassed about the record we’ve made.

With the first record (2005’s Wingdale Community Singers), you talked about writing lyrics quickly, with very little revision. But this record seems much more high-verbal than the first. Did that process change a lot?
Yeah, it did. For the first record, we were all very much into that old-time, folky aesthetic, where you just crank the stuff out, and it’s all about the joy of playing together. At the time, that sort of approach was diametrically opposed to what we all were doing separately. I guess it was sort of adjacent to what I was doing—the loud, fast, sloppy approach—but for this record, and the credit for this really goes to Hannah, we thought, “Why would we do that again? Let’s please ourselves, and reach and stretch a little bit.” So we worked and reworked the songs very heavily for this record. Some of them even went through two or three iterations before we settled on a shape. And frequently, we began with lyrics, then consciously wrote music that would make those lyrics possible and earned, and not sound forced. Like that song “Naked Goth Girls.” Hannah and I were playing a duo show at (famed San Francisco bookstore) City Lights, where we’d bashed out a bunch of standards. I had the first set of lyrics that day, and we went back and forth with it a lot. We didn’t have a chorus for a long time. We just kept passing the lyrics between us until we had it where we wanted it, and then the musical composition began. That really exemplifies the spirit of this record, as opposed to the first: a lot of writing, a lot of reconfiguring, then a lot of pushing it to go beyond its form.

That’s one of the things that’s so striking on this record, I think, as opposed to the first—it seems very consciously crafted, but not self-consciously clever. The strange changes and time signatures feel natural to the music.
I appreciate that. Thanks. We’ve always said we wanted to write songs that could have been written anytime in the last 50 years. We do take it seriously, and we do wander through a lot of influences. I’m serious, too, when I say that the band’s probably grown by leaps and bounds because I’ve grown by leaps and bounds. I mean that, really; the first record was sort of geared towards the guy who learned most of his guitar chops out of the Fake Book. But I was intimately involved in all of the arrangements on these songs. Again, I think it was due to Hannah, who put her foot down and said that we should write songs that were rich, and that were interesting to hear and to play. That involved pushing the music in a direction that had a little bit of jazz smarts to it. One of Dave’s great strengths as an arranger is that he likes these really strange chord forms. I’ve got to where, as a listener, those unusual harmonies sound really beautiful to me. That’s what interests me about the music.

In Rick Moody world, are there any writers you especially like whom you wish had made music records? Do you wish you could hear a Samuel Beckett record?
Oh yeah. I have a very specific answer to that question, which I’ll tell you in a second. But you know, it’s interesting—I think writers who do play music are usually more interesting stylists, because they use prose in ways that are really attuned to the rhythm and sound of the words. You mention Beckett, and he was a piano player; and James Joyce, of course, had a wonderful tenor voice. Nicholson Baker studied composition, and so did one of my favorite writers, Thomas Bernhard. Lydia Davis is apparently a great pianist. If you go down the line, I think you find that most great stylists have some sort of musical background. I think it encourages them to be more engaged at the sonic level. But in answer to your specific question, I’ve always wanted to hear those lyrics that Thomas Pynchon includes in Gravity’s Rainbow set to music. Man, I’d love to hear those songs.

One reply on “Q&A With Rick Moody”