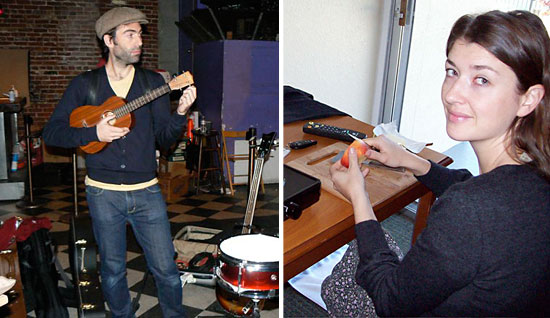 Though Clare And The Reasons are decidedly European in style and sound, the group is based in Brooklyn. The band—multi-instrumentalists Clare and Olivier Manchon (pictured), Bob Hart and Benjamin Lanz—recently toured North America with the Vic Chesnutt Band, and while some artists claim to be DIY, Clare And The Reasons take the do-it-yourself spirit to a new level. For this tour, the band designed and sewed its stage outfits and brought along two hot plates to cook its own food. Hell, the band even raised the money to be able to tour at all. While out on the road supporting Arrow (Frog Stand), Clare kept a tour diary for MAGNET.

Baltimore, October 29
It was our first time playing Baltimore. We rolled into town from Philly and had hours to spare, so we saw Where The Wild Things Are. We all decided that it felt like a long music video, which makes sense. We wanted to love it, but ultimately, it didn’t stick with us. We found a health-food store in true Clare And The Reasons fashion and got some veggies, cheese and turkey for dinner. We actually brought a double stove top on tour to cook. A company called Alter Eco gave us a bunch of quinoa, rices of different kinds, olive oil, coffee, tea and loads of chocolate to wash away our troubles. It’s a great company and as fair trade as trade can be. We arrived at Ottobar for our show with plenty of time, so Ben and I went to the local Salvation Army to try to score big. We would up wandering the aisles listening to the Supremes at full volume; it felt very Baltimore somehow. Besides some potentially awesome plaid pants that Ben seriously considered, there wasn’t much. (Unless you were into Christmas-themed dishes.) We saw a pawn shop across the street with instruments in the window, so we marched over like zombies. Sad though, somehow pawn shops have become the least likely place to find good deals. Drat! Played our show, added some extra distortion to drown out a few “talkers” amongst the otherwise diligent crowd and met some lovely people after the show.

Washington, D.C., October 30
We arrived in D.C. around noon. Wanted to leave the afternoon free to go to the National Mall, one of the best things about D.C. I recently saw Herb & Dorothy, a brilliant documentary about art collectors and supporters Herbert and Dorothy Vogel. They have been infamously collecting (loving) unknown contemporary, downtown, obscure art since the ’60s. They bought from artists like Sol LeWitt, Richard Tuttle, Christo and many more. They were sort of like ambassadors to obscure new thinking—or mascots of sorts—and befriended many artists early on, never taking art for free, always paying for it, even though they had very little money and lived in a small, cramped, one-bedroom apartment on one income. (See the film!) We headed over to the National Gallery, where the Vogels finally donated (not sold) their entire collection, about 5,000 pieces, I believe. (The Vogels are still collecting, though, of course!) Turns out they only have room to show about five pieces of the Vogels’ collection at any one time at the National Gallery, but it was still great to see. What a fabulous museum, one thing the U.S. government is paying for that is going toward really good things. We played at the Black Cat. It reminded me of Alice In Wonderland a bit, what with the checkered floor.

Athens, Ga., November 2
Athens was a first for us. We rolled into town at 3:30 a.m., after our Atlanta show. We had a hotel reservation in Atlanta, but when we showed up and saw that it was actually a crack house (or whore house, or a pleasant mix of both), we split and drove straight to Athens. It was one of those “gut feeling” moments. We woke up in Athens to a sunny day, in our well-groomed, green-grassed HoJo. I made an apple breakfast: sauteed apples with coconut, butter, cinnamon and agave. Amazing! Try it. Then we got on Google to find the best espresso in town. We found it. It’s called Red Eye. It was, I think, the best espresso we had on the whole tour. We then found ourselves at Agora, an awesomely overwhelming vintage shop that lures you in and doesn’t let you go. Bob got an amp, Olivier got a vintage Yves Saint Laurent blazer for super cheap that makes him look even more French than he did before, if that’s possible. We headed over to meet the Athens Soundies fellas, who wanted to video us doing a few songs. (Watch them here.) We headed to the 40 Watt Club to play and found the people to be quite lovely and open to our terminally unique sound.

Chicago, November 5
We have only played in Chicago once before, but I’m pretty sure I have a crush on that city. That crush might fizzle if I we’re to visit in February, I bet. We arrived from Newport, Ky., where we played in a haunted venue. We arrived very hungry, so we got a tip about this amazing restaurant called Uncommon Ground, which grows all it’s own vegetables. We were in! It’s the first organic roof-top farm in America. Our waiter was fabulous and peppy. We then went to Lincoln Hall, a brand new venue run by the same people who run Schubas. They did a beautiful job with Lincoln Hall, and it’s very artist friendly; no penises on the walls in the dressing rooms, no dents or blood on the mics. Charming! What’s up with that, anyway? Every venue in America, unless it’s a beautiful theater, has penises on the wall. It’s like it’s some universal language that musicians use to communicate with each other. Hmmmmm. The show was fun. Only the soundman knew the answer to the question, “What famous piece of music did we just quote in ‘This Is The Story’?” It’s Ravel’s Boléro, of course. The soundman got a free kazoo for that.

Toronto, November 7
Toronto was the last stop on this tour. It was also our first time playing there, and we were looking forward to it. Why are Canadians so nice? Whenever I’m at a party and there is something “off” or “strange” with someone I’m speaking to—but not in a bad way, in a good way; like, what’s up with this person, why is he so nice?—it’s always because they turn out to be Canadian. No joke. They must all be fed baby food with “nice people” nutrients in it. We had some Indian food, mostly because we had Indian food the first night of the tour and like to make bookends out of everything we can. We did soundcheck and noticed some little black flies buzzing around. Didn’t think much of it, but Olivier was complaining about them biting him. (Sadly for Olivier, it’s a bit like The Boy Who Cried Wolf.) We did our show—terribly fun audience. We had been joking for weeks that on the last night, we would drive back to Brooklyn after our Toronto show screaming, drinking Red Bull and listening to Kiss. (We had been reading an unauthorized Kiss biography in the car on this tour; amazing and horrible, but the amazing parts kept us going.) Well, for some reason we actually did this. The only difference is we drove all the way back to Brooklyn, with the Kiss and Red Bull (gross!!), but Olivier kept complaining about his fly bites from the venue. When we got home at 10 a.m., he took off his shirt and had about 50 bites the size of quarters all over him: face, arms, neck. You know what they say: “You’re not hardcore, unless you live hardcore.” We are hardcore.