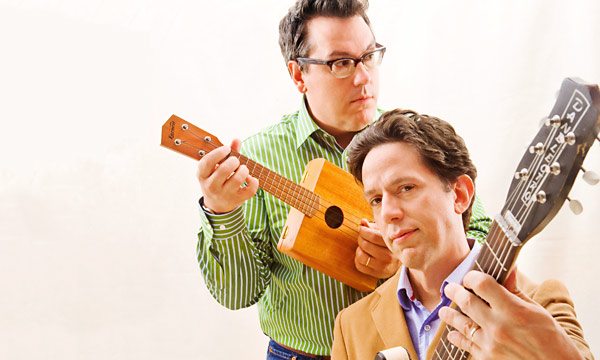 If you seek proof of the theory of evolution, consider They Might Be Giants. Over the course of three decades, the duo of John Linnell and John Flansburgh learned how to adapt and thrive in an increasingly hostile musical environment. TMBG diversified early and often, from its Dial-A-Song project and TV theme songs (Malcolm In The Middle) to podcasts and, more recently, a string of successful children’s albums, books and DVDs. Beneath all that history and extracurricular activity, however, is the same duo that brought you intelligently designed, now-classic pop songs such as “Ana Ng,” “They’ll Need A Crane” and last year’s impressive rock effort The Else. (A new album of “adult” material is due from They Might Be Giants next year.) MAGNET spoke to Linnell about TMBG’s latest children’s album, Here Comes Science, a fun and surprisingly educational foray into the world of elements, planets, photosynthesis, electric cars and, yes, evolution. They Might Be Giants will be guest editing magnetmagazine.com all this week.

MAGNET: John Flansburgh was on This American Life not long ago talking about a clause in They Might Be Giants’ rider requiring venue staff to be sober for your shows. I can only hope everyone is sober for the children’s shows you’re doing.
Linnell: Our needs are well met. As John pointed out, the rider is not just stuff you get backstage. It’s all the technical stuff you need for the show.

Is there a whole new set of hazards for the kids’ shows?
There are concerns with kids’ shows. We do have to worry about the safety of kids. We did a show this week where there were children reaching onto the stage to get confetti, and they were inadvertently reaching past electrical wiring. Parents were clearly not paying any attention in that situation, and there wasn’t anybody whose job it was to tell kids to get their hands off the electrical wiring. Between singing, I was leaning down and—without frightening the children—suggesting they keep their hands out of the electric fan. We’re actually putting on a show that’s not all that different from the show we do for adults. We play almost as loud, and we certainly play rocking songs with crazy drum solos, the whole bit. At our adult show we also have a puppet show, because apparently adults appreciate puppets just as much as children do. For some reason, that’s an alarmingly popular part of our adult show.

You learn something new about your audience every day.
Once people know something is permissible, they love it.

In a way, you’ve made the transition from playing for your rock ‘n’ roll peers to playing for a different set of peers, which is other parents.
That’s a good point. I think we see now that there are people of all ages. A lot of the parents now are much younger than we are. And there are kids who are clearly too old to be there with their parents but too young to be adults. They’re self-appointed children’s-music fans who are not children and do not have children themselves. So we really have the whole range.

Listening to Here Comes Science and your other children’s records, there’s not a huge difference in what you’re doing musically—it sounds like the songs you guys write. But is there a slightly different set of rules for writing children’s songs, like having them be shorter or not doing a long instrumental intro?
I don’t know if they’re rules, but there are slightly different guidelines for writing kids’ songs. But with our best work for kids and adults, we forget what those guidelines are and just do something that seems cool. For decades now we’ve been doing music that’s supposedly for adults but is something that adults find appropriate for their kids. I guess there’s some obvious things: We try not to swear during a kids’ show or go dark with between-song chit chat. We’re also playing material not written for kids, like “Particle Man.” I always think about how I’m singing, “Is he depressed or is he a mess?/Does he feel totally worthless?” to a room full of smiling children, and it seems incongruous, but they’re just as into that as anything else.

Here Comes Science is for an older age range than Here Come The ABCs and Here Come The 123s. Does that reflect your own son getting older?
It doesn’t reflect it, but it does oddly run parallel. It’s interesting that my son has been the appropriate age for the kids’ stuff we’ve put out so far, but that was certainly not intentional. We were asked by Disney to do music for preschoolers at the beginning, and the 123s was the logical next step after the ABCs. With the Science record, we wanted to do something that opens up the definition of what we’re doing. As it happens, it skews older but in so doing allows a much broader definition of what we can do with these projects. The ABCs and 123s were really more about entertainment—kids are gonna learn the alphabet no matter what—while Here Comes Science has some actual educational material.

Here Comes Science does have some complex ideas in it.
There’s some ambitious stuff. At a certain point, I thought we should focus on making science fun and interesting and not try to cram too much information into it because that wasn’t the point. As it happened, certain songs wound up being way more chock full of facts than we had originally thought. Some of them were really enhanced by the videos. For example, in the video for “Meet The Elements” they added all this extra-credit stuff about the chemical composition of candy and salt and things. So that’s a real Cliff’s Notes video.

I like that there are two songs about the sun on the album. One song is not enough.
The original one was written about 50 years ago.

Oh, I didn’t realize that was a cover.
“Why Does The Sun Shine?” is from an album of science songs that came out when we were very small, and our follow-up song is called “Why Does The Sun Really Shine?” and it replaces some of the information with more up-to-date information and then proceeds to confuse the issue by having a slightly more psychedelic lyric. But it’s an answer song to the first one.

Did you have any fact-checkers or scientific consultants for these songs? Listening to “Meet The Elements,” I got a flash of, “Wait, is copper still used in coins?”
That one I looked up myself and no one contradicted it. We did have a guy from the New York Hall of Science, Eric Siegel, who went through the lyrics with us, and he had a lot of good suggestions. Then he watched the videos and also had suggestions on how to clarify certain things. He pointed out that the original line in “Why Does The Sun Shine?” had a set of problems inherent in it being a 50-year-old song.

It’s appropriate that reviewing your work is also part of the scientific process.
Yeah. We’re not scientists and we’re not experts, but our main role was to come up with something entertaining that didn’t mislead anybody. It’s not a course in science. For that, you need to … take a course in science.

I’m sure you’re aware that there’s a major problem with the way we teach science and math in this country.
We’re probably included in that group of people who don’t fully appreciate the meaning of science. As laymen, in our lives we think of science as a college course. Science is a series of facts that you learn, as opposed to what it should be shown to be, which is a way of looking at the world and understanding everything around us. There’s a philosophy to science that is not intuitive or obvious, and it’s an important thing because it changed the whole world. It has a huge effect on everything. It’s pretty deep. [Laughs]

And not to get too far afield here, but it’s something that’s getting more complex as our relationship with technology keeps growing.
We often go on about the right-wing resistance to certain scientific ideas that conflict with religious beliefs. But in fact there’s also a left-wing resistance to science that’s just plain old distrust of technology, and in some ways there’s a reason to distrust technology because it’s gotten us into trouble. But science and technology are two different things. Science is just the way of understanding things, and you might say technology is the exploitation of that understanding.

They Might Be Giants has consistently found ways to be a band when it’s a historically bad time to be a band or be in the music industry. You’ve done work for TV, the Dial-A-Song idea, children’s music—are there any ideas where you might take it next?
We’ve generally had a positive approach. We didn’t run away from the collapsing record industry, but it happened that we did develop a new wing to our project by doing children’s DVDs when the bottom fell out of making rock albums. That was just lucky. We just try to keep an open mind about what we can do, and it’s helped us deal with the problems we run into doing things the old way. We do still make adult rock albums, by the way. We’re coming out with one next year. But as you suggested, it’s not a great time to make a living doing that kind of thing.

This is a good interview.

yarr, I agree, good interview 🙂 I always like to hear what the Johns have to say, and I really like Linnell’s view of science as a philosophy. I, not being a layman, am constantly thinking about the world in terms of science, and to be frank it isn’t the easiest philosophy to hold to because you’re constantly asking, “how do I really know if this is true? Is the data reliable? Is this an appropriate method to test this hypothesis? What about confounding factors, were they taken into consideration when analyzing the data to reach this conclusion? Am I being influenced by a personal bias here?”

It must be nice to think of science as a college course and say, “science is real!” rather than thinknig, “the scientific method allows for theories and hypotheses to change with further research, thus nothing can be ‘proven’ by science, because given more research and data, results and conclusions may change. Thus, science is not ‘truth’ but a body of knowledge in constant flux.”

Oh science, thou art a headache.