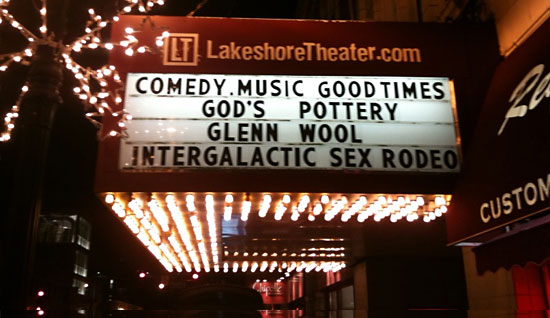 Chicago, November 19
Chicago is “[our] kind of city,” as Frank Sinatra sang! Chicago is so friendly that it even says “hi” in its name! (C-hi-cago!) You might be surprised to find out that Chicago is not that windy despite its nickname, the Windy City, but it does have plenty of broad-shouldered people, which fits its other nickname, the City of the Broad-Shouldered People.

Our first stop was at the Old Navy-brand Pier by the ocean to record a segment for The Sound Of Young America! Our host, Jesse Thorn, was actually in Los Angeles, but they used “technology” to make it sound like we were in the same room! We were worried that this was dishonest and would trick listeners needlessly, but they told us that maybe we should just focus on helping the Youth and let them focus on the public-radio business. Fair enough!

After the radio “sesh,” we went to a diner and had a healthful pre-show meal—including sweet-and-sour cabbage soup (delicious!)—and then it was on to the beautiful Lakeshore Theater! We did our “sound check” (when you make sure all the equipment works and there’s enough bottled water onstage), and then our friend and opening act Tim Harmston showed up and it was time for the show! We had a fun audience and made some new friends. Here is a picture of the marquee on the theater from that night.

We were very happy to share the marquee with our good friend Glenn Wool, who was performing the next night, but not so happy about the Intergalactic Sex Rodeo. Rodeos are OK, but Sex Rodeos are just trouble-on-a-stick, and when you introduce other galaxies and probably lasers into the mix, well then it’s clearly not a good idea! (We also didn’t like the possible interpretation that God’s Pottery and Glenn Wool might combine to form an Intergalactic Sex Rodeo.)