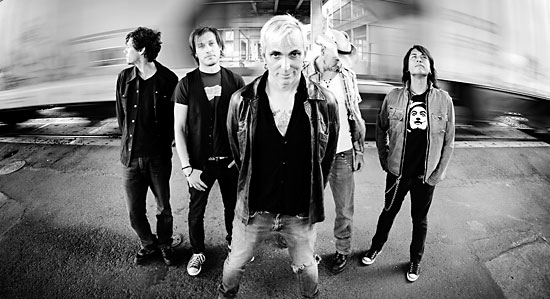 Regrets—Art Alexakis has had more than a few. And he’s had his share of losing, too. But the Everclear frontman has always done it his way. While far too many of his ’90s Pacific Northwest brethren (Kurt Cobain, Layne Staley, Andrew Wood, et al) ended up six feet under, Alexakis has been a survivor, enduring arrests, attempted suicide, drug abuse, divorce, depression, bankruptcy and much more. Despite being dubbed Nirvana lite by music critics, Everclear soldiered on, becoming a platinum-selling, Grammy-nominated, hit-making band, and Alexakis used this success to champion causes close to his heart. The revolving-door group’s latest release, In A Different Light (429), is a collection of (mostly) older Everclear songs reinterpreted in a stripped-down manner. Alexakis is guest editing magnetmagazine.com all this week.

MAGNET: What made you re-record older Everclear songs for the new album?
Alexakis: I’ve always wanted to document the way the songs have progressed over the years, and fans were requesting acoustic versions of the songs and a live album. I don’t like live albums, and I don’t think they sound very good. Most of them aren’t even live anyway, so I wanted to document the progression of the songs. So we went into the studio and recorded all of the songs live with a few vocal and instrumental overdubs. But basically, it’s a live studio album.

The album before In A Different Light was 2008’s all-covers The Vegas Years. Are you planning to make an Everclear record of all new material any time soon?
All new songs. We plan on recording in February, March and April and releasing around August. I’ve been writing for two years and have a bunch of songs. The new record is going to be a rocker!

Everclear’s lineup seems to always be changing. How come? Do you prefer it that way?
Everclear has always been my band. I like to change up the lineup every few years.

You seem to still have a really hardcore bunch of fans. Why do you think that is? Do you think people feel an attachment to you because of the personal nature of your lyrics?
Not sure if they have an attachment to me, but the fact that I write in first person tends to grab people. I write in more of a storytelling point of view, just like the Beatles did, like the Stones did. I love storytellers. My songs are stories. Even though they might be dark, they have a light at the end of the tunnel, and people can relate to that. That appeals to the general Everclear fan. Plus I think they like my hair.

For a guy who has had more than his fair share of personal problems, you seem to have a nice “normal” life now, with a wife and kids. Are you happy at this point in your life? If so, what role has music played in it?
I don’t know what role in my life that music hasn’t played. It’s been a part of my life that has influenced everything I’ve done. I always wanted to make music and films. From the age of four, my letters to Santa have been always included electric guitars, drums and an organ. I am the happiest right now than I’ve ever been. I have a better idea of who I am, what my place in the world is and what my priorities are—all of which revolve around family. As far as music fitting into it, I can’t see a world of mine without music.

You achieved a big amount of success when the music industry was booming. Do you think the excesses of the major labels in the ’90s have led us to this current unhealthy state of the music biz? Or do you think it’s the ever-evolving technology that’s done it? Or maybe you think it’s some combination of both.
Little bit of both. I definitely think there were too many bands and acts being signed—too much filler. I think this happens in all aspects of human life. We get too fat, things slow down, we find something that reminds of what it’s all about, then it circles again. Like the Beatles, Nirvana, hip hop—something will come along and show us the way, people will make money exploiting it, we’ll get lost again, and we’ll come right back. The music industry made a lot of mistakes not knowing what to do with downloading, and Napster was the ultimate death of the industry. Right now, it’s more about the music and less about the huge incomes. People are still getting rich, just not as much as they used to. Ten years ago, A&R guys were signing the biggest acts, and now their selling Starbucks. I know this for a fact. I think it’s good to get a humbling ass kicking every now and then. It keeps us honest.

You have been an outspoken Democrat for some time. After a year in office, how do you think Obama is doing? Do you think people are being unfairly harsh on him, given the mess he inherited after eight years of Bush? Do you think the Democrats can keep control of the House and Senate after the midterm elections next year?
Yes, I do believe the Dems will keep control of the House and Senate. They might lose some seats, but I’m not sure. I think that people are smarter then we give them credit for. The same scams that worked in 2000 and 2004 will not work today. After a year in office, I think Obama is doing a great job. There is no way to prepare for the job as president, even if you were vice president before—there’s no way of know until you get into the seat. It’s like being famous or getting pregnant or having a kid. You don’t know what it’s like until you’re in the seat. I have criticisms of him, like anyone. I think he’s heard all the right criticism from the right people. He needs to get back to being himself. Let the bipartisan shit go away, because it’s not going to work. It was noble move, but it’s not ever going to work. He needs to solidify his base and be the president.

One reply on “Q&A With Everclear’s Art Alexakis”