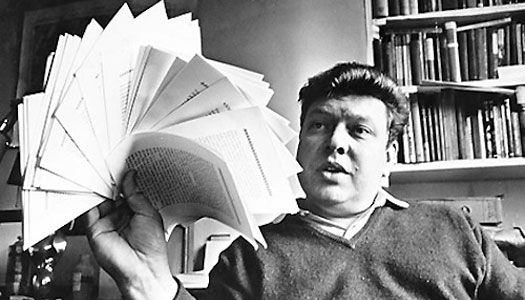 Gareth: British writer B. S. Johnson has probably influenced me as a person—and my approach to writing lyrics—more than any single album or band has. When he took his own life in November 1973, he left behind a string of consistently captivating novels, poems and plays, which—to my mind, to this day—have never received the recognition they deserve. BSJ valued honesty over anything else, to an extent that many couldn’t understand. The bedrock of all his work—and he believed all good work—was truth. “Telling stories is telling lies,” he wrote, and to many, his slightly avant approach to writing was anathema to his character. He was a traditional, football-loving, working-class man who throughout his writing career strived for technical innovation and experimentation. Albert Angelo came with holes cut in the pages to allow the reader to see what happens later on in the story. The Unfortunates was a loose-leaf novel of 27 sections, 25 of which could be read in any order the reader chooses. In House Mother Normal, he retells the same series of events 10 times, with each coming from a more infirm mind than the previous. He was a renegade and a pioneer. And now when I write, I tell the truth. Because if I’m not telling people my truthful thoughts in my lyrics, then I don’t know what I’m telling people—or why they’d want to listen. Anything less than the truth doesn’t seem fair. Video after the jump.