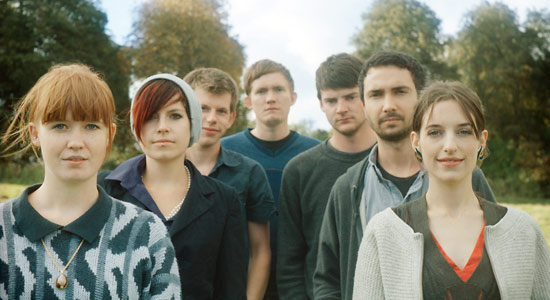 As evidenced by both their music and exclamatory band name, the seven members of Cardiff, Wales’ Los Campesinos! are excitable boys and girls. The group’s third album, Romance Is Boring (Arts & Crafts), is an energetic, all-hands-on-deck dash through the pantheon of sharp indie pop and sloppy post-punk, gathering steam from Bright Eyes’ sense of emotional catharsis and Art Brut’s wry take on modern love. Try to gather all the influences brought to bear on Romance Is Boring by LC!’s seven-member army, however, and we’d be here all day. MAGNET spoke to songwriter Tom Campesinos! and guitarist Neil Campesinos!—all members (Tom, Neil, Ellen, Gareth, Harriet, Ollie and Kim) have taken the band’s surname—about the new album. Los Campesinos! will be guest editing magnetmagazine.com all week.

MAGNET: Really enjoyed seeing all the members of Los Campesinos! do their lists of favorite records of the decade on your website. A lot of my favorites were in those lists, and some that were not too obvious: Life Without Buildings, Menomena, Mull Historical Society. Los Campesinos! seems to enjoy mentioning the records they love, yet many bands tend to be really guarded about citing their influences or are coy about them. Why is that?
Neil: I think it’s because we are genuinely massive music fans. The blog serves as a great platform for us to champion our favourite bands. If people haven’t heard some bands before and they subsequently become fans then that is surely only a good thing. I don’t see why people should hide their influences or even their favourite music. It just makes them seem odd. Or embarrassed.
Tom: Hmm, I couldn’t really say why other people are guarded. Maybe there’s some sneaky plagiarism a-happening that they don’t want to give away. We’ve always been blatant about our plagiarism, though, and worn our influences on our T-shirts, and I think that’s basically because we’re music fans and we like talking about music. But I guess the idea of citing influences can also be useful for providing listeners with a context and letting them know how you arrived at whatever sound you’re making. Or maybe it’s just an attempt to appear cool through association.

And related to all those records beloved by you and other band members: The songs on Romance Is Boring are packed with different sounds and energies, and it almost seems like everyone in the band is putting their own voice into the compositions. Is the songwriting process a smooth blend of everyone’s ideas, or does it get crowded in there?
Tom: We have a songwriting process, but it always feels like there’s the opportunity for everyone to express themselves, as the songs are constantly being discussed and evolving as a result of that. We definitely don’t have a shortage of ideas, though, so there’s often a lot of decision-making when it comes to the mix.

You worked with John Goodmanson (who’s also produced albums by Sleater-Kinney, Blonde Redhead and many others) on Romance Is Boring. Was part of his job to sort out all the ideas, or was he just there to make sure it all sounded good?
Tom: Yeah, John’s great, because he’s very open with us and we can be equally open with him. Because of that comfort level, too, I also feel like he gets good performances out of us and recording can become an enjoyable experience rather than a toil. A lot of the songs are pretty fully formed by the time he gets to hear them, but he adds loads more ideas to our already weighty pile. He’s great to bounce ideas off, though, and is often crucial in making decisions when it comes to what songs do or don’t need; he’s an excellent mediator. But, obviously, he’s great at getting good sounds, and an amazing mixer, too.

When it comes to Cardiff, most Americans could probably only name your band and Super Furry Animals as representatives, music-wise. What else should we know?
Tom: Gorky’s Zygotic Mynci were one of the most underrated bands about, and Euros Childs’ solo work continues to be equally brilliant. Future Of The Left released one of last year’s best albums, too.

All three of them are MAGNET favorites, too. There are so many of you in the band. Ever accidentally leave someone at a highway rest stop or at baggage claim?
Tom: We’ve tried really hard, but we’re a tenacious bunch.
Neil: Try as we might, we have not yet left a member behind. We’re fortunate to have a tour manager who looks after us. He holds our hands when we go to scary places like airports and rest-station bathrooms.

How’d the girl on the cover of Romance Is Boring nick her leg?
Neil: Probably shaving.

For four months, MAGNET’s editor/publisher had been able to avoid learning who makes the surprise cameo in Zombieland, but the one-sentence write-up of the movie on your website ruined it for him. Should he still see the movie? If so, will you guys buy the popcorn since you spoiled it for him?
Neil: He had better ask Ellen about the popcorn. I haven’t seen the movie. I’ll tell her that she ruined it for him and most likely millions of others.