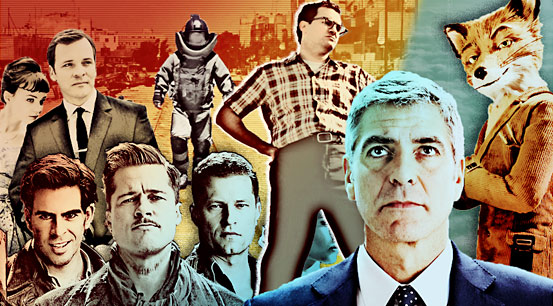 MAGNET’s Pennsylvania/California-based odd couple, editor/publisher Eric T. Miller and contributing editor Jud Cost, probably go to see more movies than any non-critic you know. Between the two of them, they must have a somewhat comprehensive history of film locked behind their bloodshot eyes, with Miller’s field of expertise covering the past 20 years and Cost’s in everything before that. Who better, on the morning of the Oscar nominations, to sort the wheat from the other whole grains when it comes to the best films of 2009? And speaking of the Oscars, check out Miller’s predictions from last year; he did pretty, pretty, pretty, pretty good.

:: Eric T. Miller’s 10 Best Movies Of 2009
1. The Hurt Locker
This Kathryn Bigelow-directed story of three bomb-disposal soldiers stationed in Iraq is a war movie for people who think they don’t like war movies. The three featured actors (Jeremy Renner, Anthony Mackie and Brian Geraghty) are fantastic, but the star here is Bigelow, whose hyper-realistic and masterful direction makes this one of the best films of last decade.

2. Hunger
Fittingly, British visual artist Steve McQueen’s debut feature is as much a piece of art as it is a film. Hunger tells the tale of Bobby Sands (played by a superb Michael Fassbender) and the 1981 IRA hunger strike he led at Northern Ireland’s Maze Prison. This is a difficult, unsettling movie, but that makes it all the more rewarding. The 20-minute scene midway through is one of the most memorable and jarring things I have ever seen onscreen.

3. Bad Lieutenant: Port Of Call New Orleans
Anchored by a fearless, way-over-the-top performance by Nicolas Cage, Werner Herzog’s take on a crooked (literally and figuratively), drug-addicted, hooker-loving cop in post-Katrina New Orleans provides some of the best and funniest film moments of 2009. Cage is nothing short of sensational in the kind of role he can do better than anybody.

4. A Serious Man
After a minor, mid-’00s hiccup, the Coen brothers got back on track with their career-best No Country For Old Men, the underrated Burn After Reading and now this, a sweet-and-sour tale of a troubled, middle-aged family man trying to make sense of his life in 1967 Minnesota. According to the credits, “No Jews were harmed in the making of this motion picture,” but I’m not so sure.

5. Inglourious Basterds
Quentin Tarantino’s sharp script and sharper direction make this two-and-a-half hour roller-coaster ride worth taking over and over, but what really elevates this film is the work of little-known Austrian actor Christoph Waltz. Playing a sadistic Nazi colonel fluent in German, French, Italian and English, Waltz delivers the performance of the year.

6. Sugar
Written and directed by Anna Boden and Ryan Fleck (Half Nelson), Sugar follows a young pitcher (newcomer Pérez Soto) from the Dominican Republic in his quest to become a big-league baseball player in the U.S. You might think you have seen similar sports-related movies, but Boden and Fleck take Sugar in a surprising (but utterly believable) direction that will make you rethink what the American dream is all about.

7. Revanche
“Revanche” is French for “revenge,” which is the underlying theme of Austrian filmmaker Götz Spielmann’s excellent thriller. The movie revolves around two couples—an ex-con and a prostitute; a cop and his wife—and how their lives intersect, but the less you know about the plot going into this film, the more you will enjoy its every twist and turn.

8. Fantastic Mr. Fox
Though I consider myself a Wes Anderson fan, I’m far less obsessed and impressed with his oeuvre than most who admit to the same. I always hoped that he would one day release a truly great film, and with this stop-motion animated delight, he did just that. Fantastic Mr. Fox is an 87-minute ode to the joys of refusing to conform to society’s expectations, set to the music of the Beach Boys and the Stones.

9. Goodbye Solo
Ramin Bahrani (Man Push Cart, Chop Shop) co-wrote and directed this wonderful story about a young Senegalese cab driver named Solo and an elderly white Southerner named William who enter each other’s lives on the mean streets of Winston-Salem, N.C. You know right from the start where this film is headed, but it’s the subtle beauty of the ride that makes this such a powerful and thought-provoking experience.

10. Up In The Air
That a film with such adult themes could have been made by a then-31-year-old director with only two movies under his belt proves that Jason Reitman will have quite a career ahead of him. George Clooney is as good as he’s ever been in this often-funny but ultimately tragic tale of a man who keeps family and friends at a far distance while he makes his living flying around the country firing people.

2. Inglourous Basterds
Quentin Tarantino is in world-class form with this itch-scratching reimagining of the last days of World War II. Christoph Waltz deserves an Oscar for his suave/vicious portrayal of the Nazi officer you’d least want welcoming you to the neighborhood. Brad Pitt is really OK leading a band of Jewish-American Nazi-scalpers. Anyone need tickets?

3. An Education
Carey Mulligan, lauded as the new Audrey Hepburn, is a teenage cello student destined for Oxford who finds a shortcut to adulthood by falling for an oily, 30-something Lothario. Old enough to be her dad, Peter Sarsgaard is just flabby enough to be believable with sufficient polish to take her for a ride.

4. A Serious Man
The Coen brothers keep their winning streak alive. College professor Michael Stuhlbarg’s whiny wife is leaving him for a pompous jerk, his teenage kids are out of control, a student is blackmailing him, and his useless brother is flopping on his couch. Employing Larry David as a problem-solver couldn’t make things much worse.

5. Up In The Air
George Clooney, the only man alive who could pull off this role, is a cross-country HR hitmen, who fires longtime employees with a touch of class. This air-travel addict falls hard for the similarly employed Vera Farmiga, then has to show Anna Kendrick the ropes when he is also made redundant.

6. Summer Hours
If you’ve never gotten into French cinema, there’s just something indescribably addictive about it. The matriarch of a large family takes a few secrets with her to her grave. The surviving family members, a tight-knit group, squabble over what to do with the possessions in her ravishingly lovely country home.

7. Crazy Heart
Jeff Bridges should get the makeup call here for not winning an Oscar for The Big Lebowski. He’s Bad Blake, a down-and-out country singer whose priceless opening scene finds him emptying a plastic gallon milk-bottle half-full of urine into the parking lot of his gig at a Colorado bowling alley.

9. State Of Play
Russell Crowe’s best role since L.A. Confidential finds him as a disheveled newspaper reporter unraveling a case of congressional malfeasance in D.C. Rachel McAdams is just green enough to excel as his unwanted young assistant in a story that echoes All The President’s Men. Some critics balked at the flip-flop ending. No complaints here.

10. Me And Orson Welles
About 20 minutes in, Christian McKay is so good at playing the mercurial, young, cynical Orson Welles that you begin to think this really is Welles himself. Pretty-boy Zac Efron lands a job with Welles’ Mercury Theatre on the eve of its Broadway triumph, a Nazi-clad version of Shakespeare’s Julius Caesar.

Y’all get out a lot more than I do, gents. Try having an 8-year old in the house and it might be a “Cloudy With Meatballs” forecast, moviegoing-wise, year too. That said: huzzah, huzzah on most of your picks. But I’m staggered, just the same, that neither of you considered the two movies (of, say, 5 I saw in a theatre) that brought me to my knees this year and left me (a) with tears in my eyes as I exited; and (b) disturbing dreams for the next several nights: District 9, and The Road.

I’ll add that the latter was so devastating that it changed my outlook on how I must treat the 8-year old in our house. As Patti Smith once told me, “That’s our job.”

Most excellent lists! I don’t get “Inglourious,” though — Tarantino riffing to a goosestep beat.