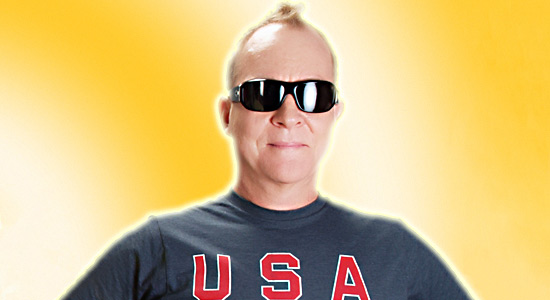 Fred Schneider has been partying out of bounds as the male mouthpiece of the B-52s since the late ’70s. To put it in perspective, Andrew W.K. would have to party for two more decades—and invest in a more adventurous and colorful wardrobe—just to catch up to Schneider. Even then, it would be difficult to match Schneider’s originality: a goofy, new-wave jester shtick that—through the B-52s’ commercial success and longevity—evolved into an iconic voice that’s now an inspiration to younger artists. Schneider’s latest project, the Superions, showcases both his supreme silliness (“Who Threw That Ham At Me?” is one of his most riotous efforts) and influence (the Superions’ debut EP, Totally Nude Island, features remixes by four Athens, Ga., bands). Along with fellow Superions Noah Brodie and Dan Marshall, Schneider has delivered a handful of songs that combine sex, sci-fi, shoplifting and a dance called the Disco Garbage Can. MAGNET spoke to Schneider about the Superions, the early days of the B-52s, Just Fred (his cult-classic, Steve Albini-recorded 1996 solo album with backing bands Six Finger Satellite and Shadowy Men On A Shadowy Planet) and dirty jokes. Schneider will be guest editing magnetmagazine.com all week.

MAGNET: I have to start by asking about one of your new songs, “Who Threw That Ham At Me?” I get the feeling its lyrics were inspired by real-life events.
Schneider: Well, it’s kind of an urban legend. Supposedly people have seen this in all different parts of the country, so I’d have to say take it with a grain of salt. I heard the story years ago from my friend down South. He said he was in a grocery store and this overweight lady was walking out and a canned ham fell out from under her coat. She quickly turned around before anyone would notice she’d been shoplifting and said, “Who threw that ham at me?”

And for the version of the story in your song, the grocery store is the Piggly Wiggly. Are the Superions based in Orlando?
I’m in New York, but I go down there and work. It was very productive last time I was there. That’s when we recorded the EP.

I love how it sounds like you just strolled into the studio and did the vocals. “Oh, hi there … “
I actually sort of did it like that. In [Noah and Dan’s] old house, the bathroom had a good sound to it. Plus, they have an azure lovebird who makes so much noise when I’m in his room because he knows I’ll let him out of his cage. He just squawks and rattles his cage. And so you can’t really do any recording in there. So I did the vocals in the bathroom.

I talked to some people who did remixes for the Superions EP and asked them about you. Jason NeSmith from Casper And The Cookies says he met you at a dinner party and that you told some really filthy jokes.
Well, yeah. [Laughs]

Anything that’s dirty enough for the Internet?
Um …

We can come back to it.
Yeah, the jokes I know are pretty filthy. If I go to the gym, it makes it real tolerable if everyone’s telling dirty jokes.

Ryan Breegle from the Lolligags said something that rang true for me: that your life and music tends to stick to the idea of “Be yourself.” Not to sound too high-school guidance counselor about it.
With the Superions, it just started out as us having a good time. I had turned Dan and Noah on to lounge and tiki music—they just went whole hog for it. I stay with them when I’m in Orlando, when the band plays, and one time when I went down there, they said, “We have a track we wrote. Would you put words to it?” And I said sure, so I went in the bathroom and came up with the lyrics for “Totally Nude Island.” And then we did one more take, and friends who heard it suggested we put it out. We started out as the Del Morons, actually; “Sexy Saucer Gals” is from the Del Morons period. But a friend of mine said, “No one’s going to take you seriously if you call yourselves the Del Morons. They might just think you’re a joke.” So we changed it to the Superions. [Laughs]

Letting loose and having fun has really been the cornerstone of your whole career.
When the B-52s started, we’d jam. We might have an idea or a title, but it’s a collaboration. Keith does the music and Kate, Cindy and I do the lyrics, and we all put it together. That’s what I’m doing with the Superions, too. It all came together so easily.

One of my favorite things you’ve done is the 1996 solo album Just Fred. It put your vocals in a whole new context. What made you want to go out and do a heavy guitar-rock album with Steve Albini?
I was in a weird space. The B-52s were working on something without me, so I said, “Well, hell, I’m going to do something on my own.” Their thing never came about, but I committed to doing this solo album and I was in an angry mood. Working with Steve Albini, who’s a great guy and someone I really admire, put the groups together for me and I wrote the songs. The mood was pretty intense. “Sugar In My Hog” was spur-of-the-moment. They were having biker wars in Montreal, and they had somebody on the radio saying, “Yeah, he put sugar in my hog.” So I said, “Hey, that’s a great idea for a song.” So Shadowy Men On A Shadowy Planet just launched into it and I jammed on it and we laughed.

So was Just Fred something you and Albini cooked up together, or was he just wrangling the backing bands for you?
We would record the songs with different groups. So I have tapes of me doing the songs with the other bands, too, a bunch of them. I can do shouty, punky stuff. I started out pretty punk—people forget that.

The first time I interviewed you, I expected you to be more outrageous or something—just based on your vocal work. Do you find that people expect you to be this life-of-the-party guy?
Yeah. People expect that I walk around in DayGlo clothes. A walking party. I mean, I like to go to parties. And I’ll definitely dance on a table if I have enough champagne or liquor in me. But I’m pretty quiet. Unless the dirty jokes are flowing.

I know you do some DJing.
I’m doing a benefit for the Georgia Music Hall of Fame in Atlanta on March 5. And I’m doing another benefit for the Visionary Arts Museum where I’m going to perform my own stuff live for the first time in 14 years. “Sugar In My Hog” and all that—that’s April 9. I was a DJ on Sirius for three years but I guess they thought I was too expensive, even though they pay Howard Stern half a billion and god knows what they pay Martha Stewart. Who wants to listen to her for an hour?

While talking to some of the Athens guys who did remixes for the Superions, it struck me how much of an influential figure you are in that town, which is still a vibrant place for music.
Well, it wasn’t that way when we were there, boy. When the B-52s started, it was dead as a doornail. All they had were fraternity bands and there was a folk club and the big concerts at the Georgia Coliseum. We just all hung out together and played house parties. Someone said, “You know, you’re as good as a lot of the bands that play Max’s Kansas City,” and we thought, “Wow. That’s where Patti Smith and the Ramones and the Velvet Underground play.” They booked us for a Monday night in December. We thought we’d made it.

What was that show like?
We were paralyzed with fear because we’d never played in front of a paying audience before. The curtains wouldn’t open, so we had to throw them open. Everyone in the crowd was sitting there smoking cigarettes and leaning against the wall in black leather. And there we are in seersucker, purple and orange and wigs. By the way, feel free to improve upon my [guest editor] posts. I don’t know why I ended up talking about Marcal paper products. Maybe to give a household hint.

Maybe you could be a guest on Martha Stewart’s show.
Well, they’re trying to get me on Paula Deen. It turns out our song came out the day before she got hit in the head with a ham, so people either thought that I threw it or that we wrote it on the spot after we heard she got hit by a ham.

So how about that dirty joke?
I have a cassette by a comedian named Bebe Benson, and all her jokes are silly and filthy. She had this one: A couple goes to a costume party out in the country, and they go as a cow. The husband is in the front, and the wife’s in the back, and they’re at the party and the wife says, “This is boring. Why don’t we go outside and have a little fun?” So they trot out and all of a sudden the wife says, “Oh my god. There’s a bull about to charge us. What should we do?” The husband says, “Well, I’m going to pretend to eat grass but you better brace yourself.”

2 replies on “Q&A With Fred Schneider”

Marcal is the biggest air and water polluter in the state of New Jersey. They have been fined almost a billion dollars by the EPA, and do much more harm than good. They filed Chapter 11 to avoid paying for the clean up, and also used it as an opportunity to break their union contract. Nice guys, huh? Then when they emerged from bankruptcy, they painted themselves green. For them to claim to be a green, eco-friendly company is a joke, as well as a lie.